Being good with IDP takes more than luck. @50shadesofdrunk is here to help you sort the gems from the junk. 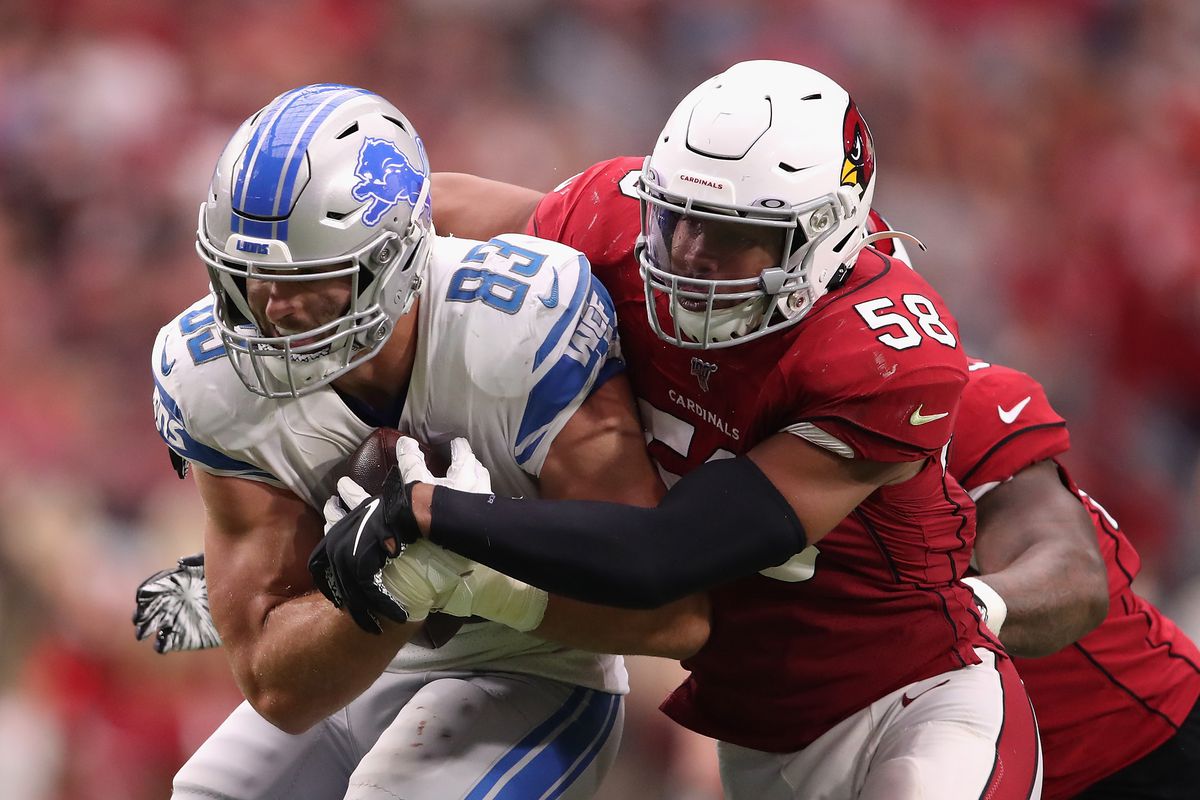 While this may seem like low hanging fruit it’s more of an atta boy to a player many folks passed on in drafts. Jordan Hicks is leading the NFL in tackles with an eye-popping 48 tackles through 4 weeks. That’s an incredible 12 tackles a game AVERAGE! In other words, he’s on pace for 192 combined tackles in 2019. Now while I don’t believe he will continue at this pace it shows you what he brings to the table for your lineup every week. He has yet to dip under 11 tackles in a single contest and the Arizona defense seems incapable of stopping opponents drives. Hicks may finish the season as the league leader in tackles after his impressive start. It’s worth noting as well while the Arizona defense is not great at stopping drives the defense is loaded with playmakers from Terrell Suggs to Budda Baker to Chandler Jones. All have proven to be capable of big plays and with that much disruption around him, Hicks is in position to have scoring opportunities, forced fumbles, and sacks. He forced 2 fumbles and had half a sack in Week 4 to go along with his 12 tackles. The Cardinals face Andy Dalton and the Bengals this week. What’s not to love?

Rookie linebacker Devin Bush has had a fantastic start to his career. Although he didn’t initially play 100% of team snaps he still managed to be very fantasy relevant posting 11 tackles in Week 1. Since then he has become an every-down defensive player for the Steelers. In Week 5 Bush plays the Baltimore Ravens. Baltimore has run the MOST offensive plays per game in the leagues so far in 2019. They also boasted the most offensive plays per game in 2018. This means ample opportunity for rookie Bush to make plays and accumulate a high number of tackles. Through the first 4 weeks of the season, Bush is averaging over 9 tackles a game and averaging one big play per game with a sack and 3 fumble recoveries. If you took a shot on the rookie you are now reaping the rewards of a guy who appears to be a lock LB1 in 2019.

While the Tampa Bay Buccaneers defense has shown some IDP acumen this season with 9 turnovers (second only to the New England Patriots), rookie Devin White isn’t a player to start with any level of confidence this week. He suffered a knee injury early in Week 2 and has sat out the last two games. While he may be available this week and was touted by many as the best linebacker prospect in this class he faces a New Orleans Saints team that, to date, has one of the lowest number of offensive snaps played per game in 2019. With the loss of Drew Brees, the Saints have had trouble moving the chains. While backup Teddy Bridgewater has led the team to two tough wins they have become a clock management team. This leads to fewer snaps for the opposing defensive players to accrue points and that coupled with Whites return from injury and nebulous projections for how he will be used he’s a player you will probably want to steer clear of in Week 5.

The Pittsburgh Steelers are averaging the lowest number of offensive snaps per game (54.8) in the league through 4 weeks. Patrick Onwuasor saw a tiny dip in his defensive snap percentage in Week 4 playing just under 90% of the Baltimore Ravens defensive snaps. Those two numbers add up to minimal opportunities for Onwuasor to make a difference for your team. This isn’t a recommendation to bench him, he’s still the best linebacker on the Ravens, but a suggestion to temper expectations. He’s a low-end LB2 but his floor this week could be in the LB4 territory.

Eagles defensive end Derek Barnett has had an up and down career and had issues staying on the field. He’s had some injury problems in the past but he appears to have put those behind him. In Week 4 against Green Bay, Barnett posted his best stat line of 2019 with 4 combined tackles, 1 sack, and 1 forced fumble. Although he was involved in some questionable plays ultimately he was not penalized for those plays and remained in the game. Green Bays’ offensive line is right around the middle of the pack and he found success against them. In Week 5 Barnett faces Sam Darnold in first game back from illness. The Jets have the third worst-ranked offensive line for pass protection through Week 4 in the entire NFL. They have allowed a sack on 11.5% of the dropbacks, behind only the Tennesse Titans and the Houston Texans have allowed a sack at a higher rate per dropback. NFL average sack rate is currently 7%. Barnett boasts a first-round draft pedigree and a Superbowl ring to boot. Look for him to build off his impressive Week 4 performance against an inferior offensive line as the Eagles continue to find their identity in 2019.

To say Sam Hubbard started the season on fire would be an understatement. He went nuclear in Week 1 against the Seattle Seahawks when he led his team in tackles (10) and sacks (2). That was good enough to be the DE1 Week 1. However, Hubbard hasn’t had a sack since that game. That fact alone shouldn’t worry fantasy managers though. Hubbard has one of the highest tackles floors at DE averaging 6.75 tackles a game and leads all defensive linemen with 27 combined tackles. The second defensive lineman on that list is Cameron Heyward with a respectable 21 tackles. In Week 5 Hubbard plays the Arizona Cardinals who have a bottom 5 ranked pass protection offensive line and a rookie QB who leads the NFL in sacks taken with 20. This is a match made in heaven for Hubbard who is playing over 85% of the Bengals defensive snaps.

Personally, I had very high hopes for the IDP output of the Washington Redskins defensive line coming into this season. Those hopes have been crushed through the first quarter of the season as the Redskins are tied with a league-low average of 1.2 sacks a game. Now couple that with the fact that they take on the New England Patriots Week 5, who have allowed Tom Brady to be sacked a league-low 3 times this season. There really isn’t much upside in Allen this week and an extremely low floor.

Entering the season Frank Clark was considered by many to be a top tier defensive lineman option. And it was completely understandable he was coming off a 2018 season where he had 13 sacks, 3 forced fumbles, and 41 combined tackles. He’s currently on pace for 36 combined tackles and 4 sacks. Not great. In his defense, he has gone up against some of the better offensive lines in the league so far this season in the Detroit Lions, Baltimore Raven, and Jacksonville Jaguars. Unfortunately, that’s not going to change Week 5 when he faces an Indianapolis Colts offensive line that has only allowed 6 sacks on the season. Anecdotally, sacks come in bunches but the odds of Clark having a bunch of sacks this week are low. He still represents upside based on his career playmaking ability but fantasy managers would be wise to consider alternatives this week.

Through the first four games on 2019 Baker is on pace to match his 2018 tackle production of 102 tackles. He consistently plays 100% of snaps and has emerged as one of the most reliable and versatile defensive backs in the league. His rookie season he proved himself adept in coverage as well with seven pass deflections. His stats in that department went down a lot in 2018 to just a single pass deflection but he draws a favorable matchup Week 5 against Andy Dalton and the Bengals offense that’s struggled to look like a professional football team at times already in 2019. This could be a breakout game for Baker and he’s a player you can and should start with confidence.

Terrell Edmunds has played the highest number of defensive snaps (317) among safeties in 2019. He’s tied for 5th place among defensive backs with 21 solo tackles on the season and plays the Baltimore Ravens in Week 5 who are averaging the highest number of plays per game in the league (72.5). It doesn’t hurt that the Steelers offense is staying on the field a league-low average 54.8 snaps per game. He’s returning incredible value at the position considering he wasn’t even drafted in some leagues and if he was it was often very late. He’s on pace for 128 combined tackles which would completely crush his rookie stat line of 78 combined tackles. Start with a high level of confidence every week, but especially in Week 5 where he should have ample opportunity to keep building on his fantastic start for IDP managers.

Coming into this season the Denver Broncos had a newly acquired head coach in Vic Fangio that was supposed to take the talented Broncos defense to the next level. Part of that was bringing in Kareem Jackson from the Houston Texans to play safety. To date though Jackson is averaging a modest 5 tackles a game on a defense that has zero turnovers and only 3 sacks on the season. All came in Week 4. To add insult to injury Jackson also picked up a small hamstring injury that forced him to sit out of Week 4. As a whole, unless you’re in a very deep league it might be advantageous to avoid all Broncos for IDP purposes, outside of their starting inside linebacker and maybe Von Miller in leagues he has defensive lineman eligibility.

For a starting strong safety, Eddie Jackson is a bit of an oddity. He finished 2018 as a top 12 DB for IDP but on the back of big plays. He had 6 interceptions and 3 touchdowns in 2018 which were enough to land him a First-Team All-Pro nod in his sophomore season. Those numbers will regress undoubtedly but the most troubling thing about Jackson for IDP is his low tackle floor. Through his first two seasons, he’s averaged just 70 tackles. He’s only had two double-digit tackles games in his career. One his rookie season and one in Week 2. Having two stud linebackers in front of him in Danny Trevathan and Roquan Smith may be to blame as many tackles don’t bleed through to the secondary. The talent and opportunity are there, he plays well over 90% of defensive snaps, but he’s a risky play any week and as such finds himself on the dust list this week.