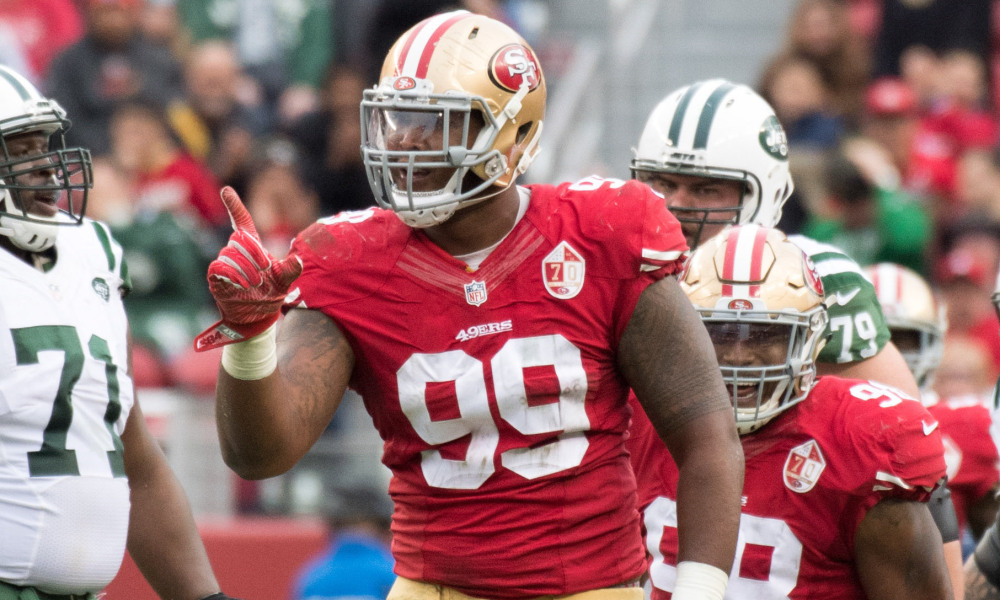 It’s Week 10 in the NFL and if you are looking like a lock for the playoffs, good for you! It takes a lot of work and a little bit of luck to get to the playoffs and is no small feat in most leagues. Some may not be so lucky though, if you’re 3-7 you may need to win out the season and catch a break along the way to get to the playoffs. That’s where this week’s byes and fill-in starter decisions will make or break you, but never fear IDP Diamonds or Dust is back at it again with some names, data, and analysis that could prove very helpful as you make these tough decisions. Without further ado…

This season has been a great season for San Francisco 49ers fans. They are currently the only team still undefeated in 2019 after the New England Patriots were taken down by the Baltimore Ravens in Week 9 on Monday Night Football. A big part of why they are undefeated is because of how well the defense has been playing and especially the defensive line. The offseason acquisitions of Dee Ford and Nick Bosa have proven immensely valuable but many seem to forget that their defensive line already boasted one of the most athletic pass rushers in the league. DeForest Buckner was selected number 7 overall by the 49ers in 2016. Since entering the league he has averaged 65 tackles and 7 sacks a season and is on pace for that kind of season yet again. With the addition of other elite and disruptive pass rushers, Buckner now has the advantage of being in line for more possible big plays like forced fumbles and fumble recoveries, as well as sacks. Buckner is also the undeniable snap leader among the group having played 76% of the team’s overall defensive snaps. Not far behind him is Arik Armstead with 70% then Nick Bosa with 66%. His versatility makes him hard to take off the field in most situations. Week 10 brings Buckner and company a very plus matchup against division rival the Seattle Seahawks who let Russell Wilson be sacked 3 times in Week 9. It wasn’t the first time this season Wilson has been sacked multiple times in a game and there’s a very good chance he is again in Week 10 based on what we have seen from this 49ers defense. Bucker and this 49ers defensive line love to get after the quarterback.

Since coming into the league in 2012 Danny Trevathan has been an up and down IDP option. He’s only started a full 16 games twice in his 7-year career but appears to be on track to do it a third time this season. When Trevathan has started at least 15 games he’s been 100+ combined tackle player and even has a season of over 150 tackles. This season Trevathan is on pace for  135 tackles, his second-best tackling season to date. Trevathan was an afterthought in many IDP drafts because of the rookie Roquan Smith, a highly drafted middle linebacker prospect from Georgia in 2018. Smith has been performing just ok this season when many expected a jump in productivity. This combined with the putrid offense of the Chicago Bears means Trevathan has seen the field a lot, 555 snaps to be exact, and been responsible for being a leader on the defense. As long as these trends continue Danny Trevathan is the most reliable IDP option on the Bears defense and should be started with confidence every week. He’s even shown some big-play upside with a sack, and a forced fumble on the season which IDP owners love to see. He faces a pass-heavy Detriot Lions in Week 10 and should see a lot of sustained drives by the opposing offense to continue racking up IDP production during one of his best statistical seasons.

If you watched last week’s Thursday Night Football matchup between the Arizona Cardinals and the San Francisco 49ers you know Budda Baker stole the show on defense. That’s saying something considering the likes of Nick Bosa, Chandler Jones, and Richard Sherman were in the game. Baker finished the game with 13 tackles, 3 passes defended and 2 TFL. An absolute monster IDP game. This isn’t the first time Baker has appeared in this series either, back in the Week 5 Diamonds or Dust column Baker he was featured as a great start. He managed to go out and have his worst game of the season so far that week. But we won’t talk about that. Baker faces the Tampa Bay Buccaneers in Week 10 who have a very pass-heavy gameplan week in and week out and a turnover-prone quarterback who pushes the ball downfield.  All signs point towards another big game for Budda Baker.

There were high hopes for Denico Autry coming into this season. In 2018 he quietly had a really good season with 9 sacks in just 12 games. And to start 2019 he kept those hopes high, posting 8 tackles, 2.5 sacks and a forced fumble in the first two weeks. In the six weeks since Autry has only 9 tackles and no sacks! Unless you play in a league that awards a premium for tackles made by defensive tackles, Autry has been hurting your team, and it might be time to let go. Granted he faces a very inept Miami Dolphins team in Week 10 which looks like a good defensive matchup. Autry’s floor is just so low at this point unless you are hard up against bye weeks, he has no reason to come close to your starting roster.

Back to back Colts make the dust list? Colts fans hate to see it, but IDP managers would do well to take note. In Week 9 Clayton Geathers played just 52% of defensive snaps. That’s not even close to what you want from start worthy defensive back in IDP. On the season Geathers is barely out snapping the rookie Khari Willis. Geathers has played 64% of defensive snaps and Willis has played 63%. This appears to be a rotational role between the two at strong safety and makes both Geathers and Willis very risky plays. It’s a bummer for IDP managers who saw Geathers playing essentially 100% of the snaps in 2018. We must be like water when it comes to fantasy football and adjust our expectations when things are different than we had projected. Coming into 2019, many had high hopes for Geathers as a breakout IDP stud. He had his best statistical season in 2018 and only managed to suit up for 12 games to boot. Expectations vs reality though say Geathers is better left on the bench, for now.

After starting the season on a fairly high note for IDP managers, Haason Reddick has fallen back to earth. Between weeks 2-7 Reddick was consistently on the field for over 95% of defensive snaps and producing a decent number of tackles for IDP fantasy managers. That hasn’t been the case the past two weeks though. Over the past two weeks, Reddick has seen his defensive snaps dip under 50%  in back to back weeks. He’s been losing snaps to veteran linebacker Joe Walker, who appears to have beaten out Reddick for the starting role in the base defense. Walker has been playing well, out snapping Reddick and being more efficient. He posted 11 tackles on 57% of snaps in Week 9. Both are risky plays but Walkers stock is quickly rising while Reddicks, plummets.

Hopefully, you were able to learn something from this column this week that will help you get that sweet, sweet W. Each week around the NFL so much can change in the blink of an eye it seems. A player you have come to rely on is suddenly not performing. Why? Someone you were benching early on is suddenly coming on strong, should you trust it? All one can really do is find reliable sources they trust, absorb the information presented and make the most informed decisions for there team each week. Give me a follow on twitter @50shadesofdrunk and good luck in Week 10 and may the odds be ever in your favor.