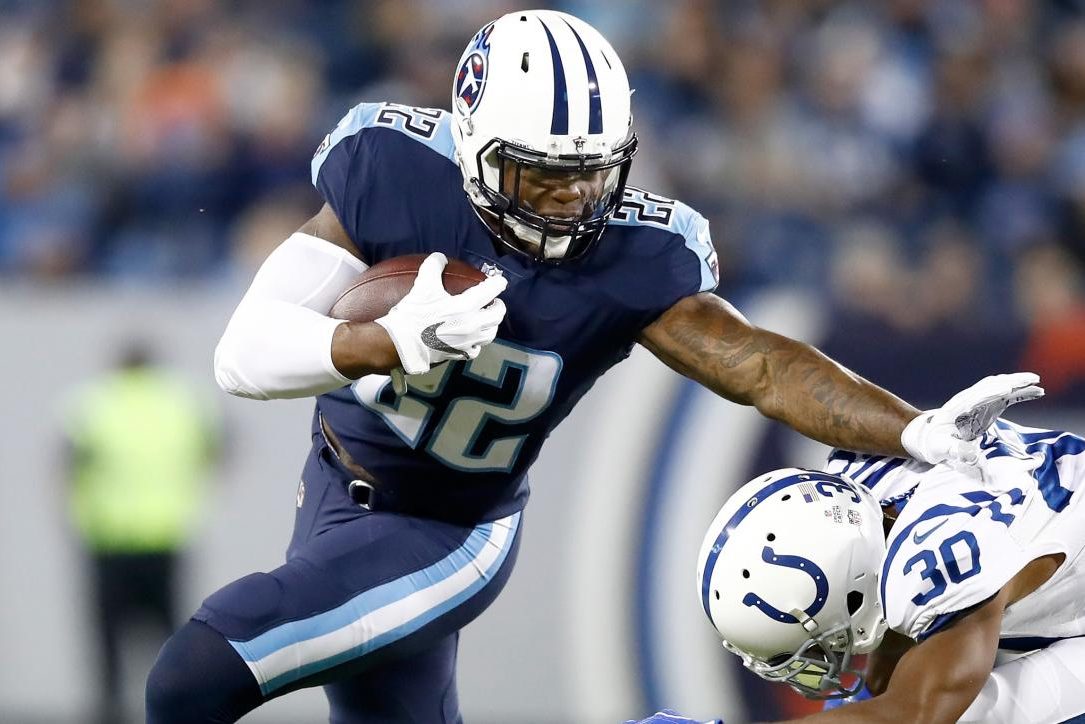 It seems the Derrick Henry hype train was derailed just as it left the station when it was announced that the Tennessee Titans would be signing Dion Lewis to a 4 year 20 million dollar contract. Derrick Henry has seen his startup ADP spiral as we now see the 24-year-old with the body of an Adonis fall to a low-end RB2. It makes sense, Dion Lewis was an RB1 over the second half of last season in just about any format imaginable and is a much better receiver and pass blocker than Derrick Henry, who couldn’t beat out an ailing Demarco Murray because of his deficiencies in this area. But when I see this backfield I think we have a clear pathway to multiple backs succeeding, and Derrick Henry should benefit the most from this relationship.

Any way you split it, the Titans are going to run the ball 450 times, new offensive Coordinator Matt Lafleur ran the ball 454 times last season with Gurley as his lead back, Mike Vrabel comes from a team that averaged 482 carries a year during his 4-year tenure as a Texans coach. The Titans themselves have averaged 460 carries the past two seasons. All signs point to there being 450 carries minimum being up for grabs. Dion Lewis is 28 years old and has 329 career carries, and he has only handled 100 carries once which was this past season. There is not much implying that he can handle 200+ carries and even if we earmark him for 180 carries(a career high), there are 270 left for Derrick Henry to take up. Now Mariota will take another 60 or so carries, but the depth chart past Henry and Lewis are David Fluellen, Akrum Wadley, and Dalyn Dawkins, all former undrafted Free agents. Barring injury, I see no reason for any back to take the field beside Lewis and Henry. For Henry not to get 230-250 carries, you are banking on Lewis getting a career-high in careers and three undrafted free agents to steal carries. A scheme like the Titans are going to run needs two good backs, because it is impossible for a back to handle 400 carries unless your name is Eddie George.

Lewis is now the 11th highest paid running back in the league. That alone is scary but part of this is that Derrick Henry has such a good contract, the Titans could afford to go overpay for a guy who fits their system. You see this a lot in teams that have run heavy schemes, they often have multiple running backs who make a lot of money. Here is a list of guys in the top 25 highest paid RB’s who will not be atop the depth chart at the beginning of the season. Giovani Bernard, James White, Latavius Murray, Theo Riddick, Chris Thompson, Johnathan Stewart, Corey Grant, Duke Johnson. Lewis profiles very similarly to these pass-catching backs, and while he is getting paid the most of this group, you do not hear much chatter about staying away from Dalvin Cook, Leonard Fournette, Derrius Guice, or Joe Mixon because there is another highly paid back on the team.

I see Lewis as a great complement to Henry, a guy who can keep the chains moving in the passing and running game, but doesn’t have the build to steal a significant chunk from Henry. Lewis is going to get 200 touches in this offense most likely, but if he is efficient and good in this role, the Titans will have plenty of scoring opportunities. Derrick Henry will be the goal line back and Lewis being there is going to help the Titans offense and get Henry more scoring opportunities. At the end of the day, Lewis is a great running back, and the concerns are legitimate, but Henry’s stock has fallen far enough because of this that I am buying wherever I can.