DJ Moore vs Odell Beckham Jr. @NFLDraftDynasty vs @GbridgfordNFL. The cage match you’ve been waiting for! 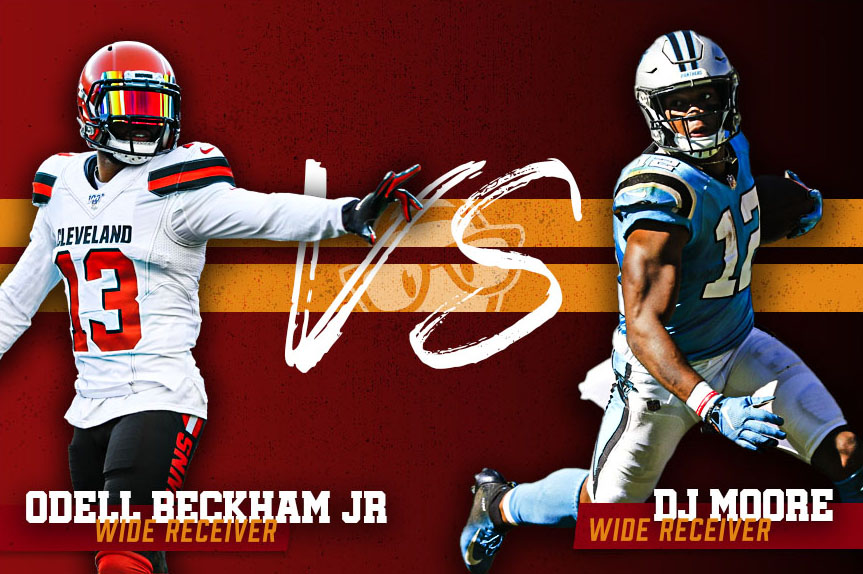 In a new series of writer debates we’ve pitted Nate Christian and Gage Bridgford against each other in a heated argument about big name wide receivers going into 2020. Nate Christian will be fighting for DJ Moore, while Gage Bridgford will plant his flag in OBJ’s corner. Are you ready to rumble?

In 15 games, DJ Moore caught 87 passes for 1175 yards and 4 TDs. These numbers put him at WR12 in PPR formats and a buy-in dynasty fantasy. Somehow despite finishing the season as a WR1, DJ Moore is still being questioned as a true fantasy star.

What are some things you want to see out of your WR1?

Cleveland Browns wide receiver Odell Beckham Jr. had a down year in 2019 compared to the expectations for him entering the year. He had 74 catches for 1035 yards and four touchdowns. Unfortunately for Beckham, he was dealing with a nagging injury all season that he got fixed this offseason. That will be an automatic bump for him next season with him being healthy.

Quarterback Baker Mayfield regressed mightily in year two because of a bad offensive scheme combined with a bad offensive line. Despite all of that, Beckham still had over 1,000 yards. He was getting opportunities, as he was just a hair behind teammate Jarvis Landry in targets, and, as we all know, volume is king.

Teddy Bridgewater just signed a three-year deal with the Carolina Panthers, and now we salivate over DJ Moore’s potential in 2020. Bridgewater is known for being a conservative passer and having the lowest average depth of target in 2019. Why is this good for DJ Moore? We saw what Bridgewater could do as a starter when he took over for Brees mid-season. Many wondered in Michael Thomas could still be a WR1 with Bridgewater as his QB. Here’s what happened over six games:

Bridgewater can undoubtedly sustain a WR1. Not to mention the Panthers now have Joe Brady as their Offensive Coordinator who just helped Joe Burrow set a record of 60 TDs in college football.

For starters, the team has a better offensive mind calling the shots in Kevin Stefanski, who helped coordinate the Minnesota Vikings into one of the league’s better offensive teams last season. Stefanski’s offense last year was reliant on a strong running back, Dalvin Cook to Nick Chubb, and two good wide receivers, Adam Thielen and Stefon Diggs to Landry and Beckham. The pieces at the skill positions are there for it to be successful.

Remember when I mentioned that Beckham played with an injury for the year? Yeah. That injury is gone, and he’s going to be healthy for an entire year. He’ll also be playing his second year with Mayfield, which will give them another year to build chemistry together. Beckham scored just four touchdowns last year, which was the fewest he has scored in any season outside of 2017 when he played just four games. Positive regression should come.

In 2020 DJ Moore should have some positive touchdown regression, as 4 TDs on 135 targets is pretty poor production. Curtis Samuel will be another year into his career, and many are looking for him to take on a more significant role, but he’s a field stretcher and won’t fit with Teddy Bridgewater’s style of play nearly as well as Moore.

Meanwhile, Joe Brady’s offense is a spread/RPO-style offense and will use quick passing and short routes to move the ball down the field, further creating opportunities for a strong route runner and quick target like DJ Moore. While McCaffery set career-highs for receptions and receiving yards, we can expect his usage to ramp down a bit as the team becomes more competitive and looks to save his body for (hopefully) meaningful games near the end of the season.

DJ Moore is setup for a WR1 finish once again in 2020, and could be a steal for his current value.

In 2020, I’m expecting Beckham to become a top-10 fantasy wide receiver. He finished as WR29 in PPR scoring. He averaged just 12.3 points per game last year, which, after he was drafted as a borderline top-5 wideout, was a drastic disappointment. The reason I don’t have more conviction about him finishing in the top five all boils down to his teammate Landry, who I would not be surprised for him to repeat his top-15 performance.

If I had to put a stat projection for him, I’d project him for over 1,200 receiving yards along with seven touchdowns and over 80 receptions. He also registered a career-low in catch percentage at 55.6 percent, which I expect to be back above 60 percent at a minimum. Talent has the ability to elevate, and he was an elite fantasy wide receiver with the ghost of Eli Manning as his quarterback.

Baker Mayfield has had an up and down career two seasons into the NFL. Many expect a bounce back in 2020, but that doesn’t exclusively correlate with Odell Beckham becoming a WR1 again. With Austin Hooper, Jarvis Landry, Kareem Hunt, Nick Chubb, and David Njoku all competing for targets, there likely just won’t be enough opportunity for OBJ to distance himself and become a top fantasy WR again.

Also, Stefanski, the new head coach, likes to rely on running the ball and using 22 & 12 formations (both two tight-end sets). The Vikings in 2019 had 2 TEs on the field for 53% of offensive snaps. If the Browns follow this trend, it will create even fewer opportunities for OBJ as well as Jarvis Landry. Mayfield will likely take a step forward with all of his weapons and good coaching staff, but the Browns offense may be too varied to give any single player the chance to become a top fantasy player.

First off, I love D.J. Moore as a prospect this season, and I think he’s a great piece to build around with his youth. However, for this season, I have several concerns. For one, I don’t have a ton of confidence in Teddy Bridgewater. Bridgewater has been serviceable behind good offensive lines. The Panthers just traded their best offensive linemen, and they have much work to do upfront. If you put Teddy behind that line, I think he’s automatically going to be worse off than he was in New Orleans, which directly impacts Moore.

Mayfield struggled last year, but the offensive line will be upgraded this offseason to give him more time to throw. Moore has scored just six touchdowns in his two seasons despite playing 31 total games. It’s also the first year under new head coach Matt Rhule. We have no idea what to expect of this offense that hasn’t been used in the NFL before. For those reasons, I’d prefer OBJ for this upcoming season.

The decision is in your hands now. You are the jury. You get to weigh the evidence and make a play for the wide receiver you want to play on your fantasy team.