@ekballer is at it again testing efficiency metrics for usefulness.
Which are worth watching? Which are a waste of time? 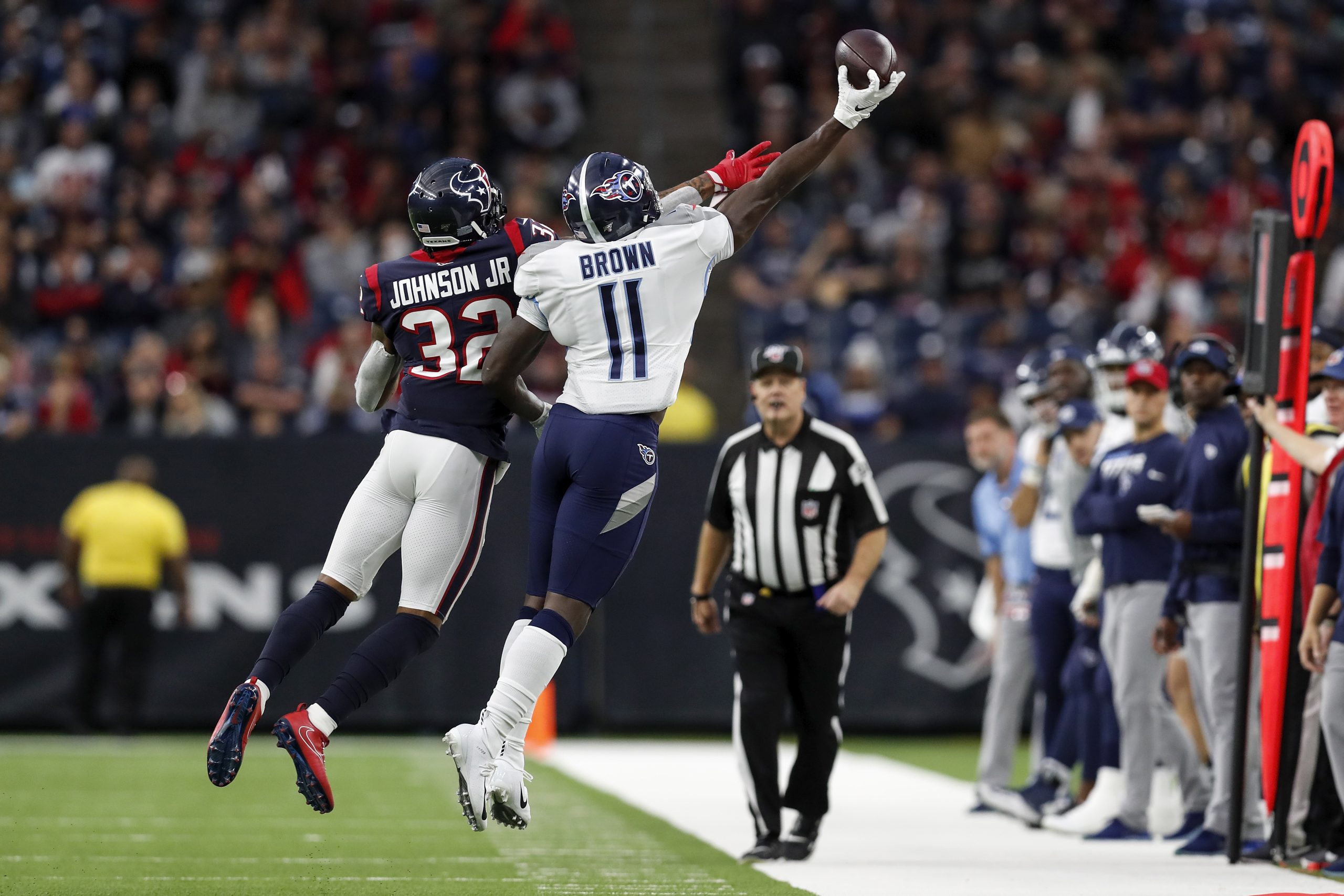 Hello again FF family! I’m back at it again, digging into advanced metrics for fun and profit. This time out, we’re chopping up some fun WR numbers, including Average Separation, True Catch Rate, and Contested Catch Rate. We’re going to see which of these metrics correlates to fantasy points and see if there’s a direct application for these numbers for your fantasy team.

For a better introduction into this series (and some notes on methodology) check out Part 1:

We frequently hear that a given player does / does not create separation, but it’s generally just anecdotal. The Target Separation metric measures a player’s average separation at the time the ball arrives, giving us a relatively empirical look at this event.

I’m using FantasyData stats for this series- who in turn use PlayerProfiler data- but NextGenStats does produce a similar although sometimes conflicting metric.

So, how useful is this stat for fantasy?

There’s some ballers on that list, for sure. But there’s also a heck of a lot of guys that seem like bench fodder at best- Geronimo Allison? Keelan Cole?- and there’s a lot of big names that don’t make that list- Michael Thomas, Julio, Nuk, Golladay, and so on.

That’s not the kind of line we’d hope to see for a useful metric! We would like to see a positive trendline where Y increases with X and a tight cluster of data points around it. This trend line is hardly even meaningful.

The r-squared value of .0293 indicates little relationship between the two variables. The correlation coefficient for these data sets is -.171, depicting a negative relationship, just as does the trendline; this data would lead us to believe that as target separation increases, production decreases.

It’s clear from our data that Target Separation isn’t going to steer you toward fantasy points.

I would guess that there is a relationship between creating separation and creating production, but that’s not what this number measures- it only measures the separation when a target arrives. It’s not considering the other routes run at all or how consistent the WRs are at creating separation on those routes.

It’s a reasonable assumption that there are wide receivers that tend to only be targeted when they are wide open, whether they are the 3rd or 4th read or that they aren’t great with contested balls. That set of receivers is represented here along with the studs that consistently separate.

What I want Target Separation to measure is what Matt Harmon measures in him ReceptionPerception work- the consistency with which WRs are winning their routes. That’s not what we’re getting here.

True Catch Rate is a metric that adjusts a player’s catch rate for un-catchable passes. It is charted, so there is likely some subjectivity to it.

At first glance, I’m not sure what to make of this data set. Many of the super-studs show up here as well as a lot of “meh.”

I thought this might at least be useful as an exclusion / threshold type number, but at the bottom end (not shown here- check the link to the color-coded full chart) we have guys like Golden Tate, DK Metcalf, and Michael Gallup, that are objectively successful WRs.

Check out the full chart here:

Here’s the scatterplot of our data set and trend line.

You can see the data doesn’t have much of a linear shape. Our regression shows a weak relationship at best; an r-squared of .0048 and a correlation coefficient of .0696 tell us the isn’t much of a meaningful correlation between TCR and PPR points.

I was genuinely surprised there was no correlation here. Intuitively, catching the ball more seems like it would correlate to scoring more points. Clearly, there are some confounding factors here that aren’t obvious.

My first thought was that we’re picking up those low volume, only-get-the-ball-when-I’m-a-mile-open guys.

So I went back to the data set and limited it to guys with 60 targets or more. Here’s my revised list (top-40)

R-squared of .0917 isn’t anything to write home about, but there’s a relationship there now. The truncated set has a correlation coefficient of .303, showing a positive correlation between the two numbers, though not what we’d consider a strong correlation.

The revised data set suggests that if a player has a high TCR- and he gets a decent number of targets- he’s likely to produce well in fantasy.

This isn’t a number to weight heavily in scouting; in a vacuum, it’s a weaker correlation to PPG than metrics like Y/TGT or Y/RR. It’s a weaker signal than plain old raw targets, as well.

Still, it’s certainly a nice asset in a player’s portfolio. At the very least, it indicates a player has good hands.

Interesting players that pop in TCR:

Keep in mind we’re not controlling for ADOT here, so some of these players might be getting low-value, LOS targets; some, like Washington and Anderson, are putting up nice catch numbers despite often working as deep threats.

The final metric we’ll look at this time out is Contested Catch Rate, the percentage of passes a receiver is catching while a defender is challenging for the ball.

The theory here is that there’s certainly a set of NFL receivers that might not create a ton of separation through their routes but that can consistently win 50/50 balls and provide production in that manner.

Some of this list is very much the usual suspects, some of it is not.

I doubt anyone would have guessed that John Brown was the NFL’s leader in Contested Catch Rate last year! He had ten contested targets, so it’s not a total fluke.

We’re getting an r-squared value of .1095 and a correlation coefficient of .3309 for this data set. There’s certainly a relationship here, though the numbers are telling us it’s not overwhelming.

Just as with TCR above, CCR seems to have value, but it’s going to be the be-all-end-all for scouting.

Interesting players that pop in CCR:

Is There Predictive Value?

I used regressions again to test these metrics again with year N+1 PPG and ADJ^TGTs (change in targets from 18 to 19, adjusted for games played- see the previous article or DM me for more information).

The results aren’t very promising to use these metrics as a direct signal for next-year production.

Here’s the data set for CCR:

If you’ve followed along at all, you don’t need me to explain that those aren’t strong relationships. There’s actually a minuscule negative correlation.

Here’s the data set for TCR:

TCR fares better under this analysis, but our correlations are still very weak (those two numbers in the bottom row are the correlation coefficients).

Here are the scatters:

This gives us no evidence to believe that a player ranking more highly in TCR will get more targets or score more points the following year.

To squeeze any last bit of usefulness from this data before I put it down, I created rankings for each metric then counted how each of the top-30 WRs in PPG fared in the various lists. I’m trying to create “buckets” that catch certain types of players, and then use those groups to identify other players likely to break out.

The results are interesting. Here’s the chart (you’ll likely want to open it in a new tab):

All of the top 30 WRs landed on at least two of the lists except AJ Brown, Jamison Crowder, and Devante Adams, all of whom were only on one top-30 list but in the top-35 or so on all 4.

I suspect if I added a YAC line, those three would have hit strongly there as well.

So, to what immediate use can we put this info? Let’s look at the players that hit that criteria that were not in the top-30 in PPG to see if there’s some value to be had.

Unsurprisingly, 4 of these players occupy the next 5 spaces on the PPG list. (that includes Beasley!)

The others, Diontae Johnson, James Washington, Sterling Shepard, and Randall Cobb, are some of the most glaring buys at ADP in all of the 2020 fantasy draft.

You shouldn’t need a ton of math to tell you to draft those guys- but if you do, there it is!

That’s it for this time out. Thanks for following along. If you have questions or you want any of the raw data, I’m happy to share- DM me at @ekballer on Twitter.