Does Cam Newton have a future as a starter in the NFL?

@Glosser13 takes a look into what’s next for Cam Newton’ dynasty value after his one season in New England. 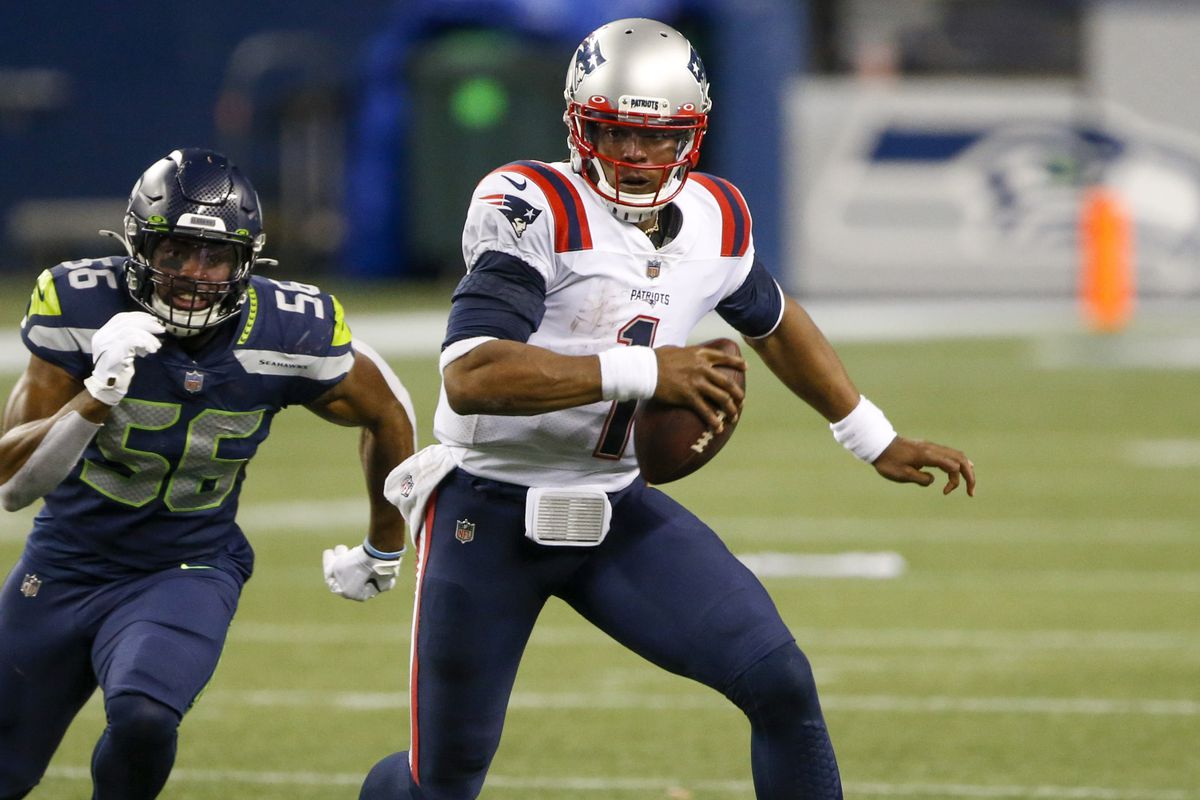 After the 2015 season in which Cam Newton won NFL MVP, I never imagined myself questioning if he should be an NFL starting QB just five years later. As a dynasty manager, you are always trying to project a player’s future value, and there’s no better time to do that than now.

We are all aware of the struggles of the former Auburn Tigers product in his age 31 season, returning from a shoulder injury that has cost him all but two games in 2019. Newton was signed late in the off-season by the New England Patriots, who faced a rebuilding year with their star QB Tom Brady’s departure. On top of Brady leaving in free agency, the Patriots lost key pieces on their defense to both free agency and opt-outs because of the coronavirus pandemic.

The idea of Cam Newton playing his 10th season under new coaching in a very unfamiliar offensive system than he’s used to in a shortened off-season and producing great numbers was highly unlikely. The Patriots have openly admitted the struggles they have faced this season with a lack of weapons and execution on the offensive side of the ball. With that being said, when you play quarterback in the NFL, you take most if not all the blame for the lack of offensive production, and Cam Newton has unfortunately done that this season.

The goal here is to give you a deeper perspective on Cam Newton’s value from a dynasty perspective after this season. Anybody can look at the numbers and form a quick opinion on whether a player is a buy or sell for their current dynasty team. I want to give a fully thought out opinion on Newton and what we can expect as the 2020 season comes to a close.

There are very few quarterbacks in the NFL with the list of accomplishments that Cam Newton has. After a troubled start to his college career, Cam set the college football world on fire with a historic 2010 season for the Auburn Tigers. In that 2010 season, Newton took home nearly every offensive award, including the Heisman Trophy, after being responsible for 51 total touchdowns, which was best in the NCAA. Newton completed a near-perfect season by leading the Tigers to their first National Championship game win since 1957.

After being drafted #1 overall in the 2011 NFL draft, Newton would win the 2011 AP Rookie of the Year. A few brief seasons later he was the 2015 NFL MVP in a season where he made his first and only Super Bowl appearance. Newton has been on the NFL top 100 list in every season from 2012 to 2019 and has three seasons where he has finished top 5 in the NFL in rushing touchdowns. Cam Newton ranks best all-time in rushing touchdowns for a QB with 69 scores.

It was almost a guarantee that given the way “Superman” plays that he would eventually deal with some nagging injuries in his career. Newton faced this even in college, as a back injury likely made the 2012 BCS National Championship a much closer game than it should have been. He’s been dealing with injuries to his left foot and ankle for most of his career. He’s played through it, and this off-season, he had surgery to repair it.

Prior to the 2018 and 2019 seasons, Newton had only missed seven of 119 games in his career for injury. Newton has been durable for his team. It seemed like at the end of the 2018 and beginning of the 2019 season, his body just shut down. The injuries to his shoulder and left foot were finally enough to make him stop playing. He found himself a free agent after the 2019 season with Carolina, where he only played two games.

There’s no question Cam’s 2015 season was an outlier, but it’s hard for me to accept that a QB who accounted for 45 total touchdowns, 4,473 yards, and a 15-1 record is just finished. Let’s not forget the amount of below-average quarterbacks that have started or played in games just last season alone.

In seasons Cam Newton has started at least 14 games he has never finished with less than 3100 yards passing or 18 TDs. Until this season, when he was unable to accomplish either. The 2020 season, in many dynasty managers and football fans’ minds, has buried Cam Newton. I don’t believe that to be the case. Cam was a last-ditch effort for Bill Belichick and the Patriots to remain a potential playoff team. They signed Newton to a $1.75M deal after being a free agent nearly the entire off-season. It was clear the Patriots had major concerns about starting Jarrett Stidham in 2020.

The 2020 New England Patriots struggled to throw the football. This was not something that surprised many people. Last off-season, they lost their Hall of Fame QB Tom Brady to free agency and added nothing at wide receiver. The Patriots offense finished 30th in passing yards and 27th in points per game, including a league-low 19 receptions from the tight end position. We can’t forget Cam Newton’s best years in Carolina; he could rely on Greg Olsen for a large volume of his pass yards. That wasn’t available to him in the New England pass offense.

The list of things that went wrong for the Patriots offense in 2020 is almost endless—everything from poor execution in pass protection to lack of talent and depth at the pass-catching positions. I’ll choose not to bore you guys with what Cam could have done better. The unpopular opinion is he couldn’t have done much. Cam was set up for failure in 2020, and he knew that when he agreed to sign with New England. That shouldn’t take away from what Cam did well in 2020.

Cam Newton finished with the most games he’s started (15) since 2018 and the most wins he’s had (6) since 2017. The passing numbers were just not good enough, as we all know. The one thing you can count on Cam Newton for his rushing production, and he brought that to the Patriots offense this year. Only Derrick Henry, Dalvin Cook, and Alvin Kamara finished with more rushing touchdowns than Newton’s 12 this season. Newton finished with 55 first down runs, good for 10th in the league. His 592 rush yards were third in the NFL among quarterbacks. He also helped the Patriots finish as the fourth-best rushing offense at 146.6 yards per game.

As a passer, Newton did some good things as well. In 2020 Newton finished with his highest completion percentage since 2018 despite having the least amount of attempts of any season of his career. Cam also finished with the least amount of interceptions of his career (10), which is the same amount as his MVP season in 2015. Newton’s eight passing touchdowns and 2.2 touchdown percentage are both the lowest of his career. He also attempted the least amount of red zone attempts of any starting QB this year with just 2.4 per game. Three game-winning drives in 2020 were also the second-best of Newton’s career, tying his 2017 season total.

Cam Newton likely won’t be back with the Patriots in 2021. However, in a recent press conference, Bill Belichick stated that a decision has not yet been made. I’m sure Patriots’ fans and many dynasty managers wouldn’t mind seeing Newton’s exit from New England. I wouldn’t mind him back to see what he can do with an entire off-season under Josh McDaniels. Newton would also benefit from better weapons than leading WR Jakobi Meyers, who caught just 59 passes in 2020.

@OddsShark on Twitter has the current betting favorites as Washington, Denver, and Chicago for Cam to play next season. Washington being a big favorite at even odds as early as last week. The relationship between Ron Rivera and Cam Newton is a powerful reason why. Cam has proven he will play for cheaper to earn the fact that he’s still a starting QB. As I previously mentioned, some QB situations across the NFL right now are an absolute disaster. Banking on no NFL teams taking a chance on him is a poor bet.

From a dynasty perspective, Newton is likely worth next to nothing if you have him because of his future uncertainty. This is a time to take advantage if you have struggled at the QB position in a super-flex league. The price of acquiring him has to be nearly free even in deeper leagues. Especially with this 2021 rookie class of QBs. Cam Newton is worth a spot as a QB3 or QB4 on your roster on rushing upside alone. This would be the time I’d be pushing to acquire him for as cheap as possible. Dynasty managers are too busy preparing themselves for the rookie profiles on this loaded 2021 class.

I don’t know where Cam Newton plays next year or for how much. Frankly, none of that matters to me. As a dynasty manager, I saw enough from Cam Newton in 2020 to lead me to believe he can still be fantasy relevant. There’s likely no chance Cam plays on another one year prove-it deal. The way he carried himself in 2020 should let NFL teams know he is still a player you want on your team. It’s best for dynasty managers if we see Cam Newton taking snaps in 2021. I think we’ve seen enough of the starting NFL QBs going down to injury. Just to see Chase Daniel or Kyle Allen step in to play the position.

Thanks for reading, Nerds. This was an instant reaction piece to Cam Newton’s rumors that have been out there as of late. I could be completely off on this. In dynasty, we should be looking to buy low—especially quarterbacks in super-flex leagues. There’s no better situation and player to gain on the super cheap than Newton heading into 2021. As always, reach out to me on Twitter @Glosser13.

Rookie season is here. How are you doing your scouting? Try a free three-day trial of the NerdHerd and check out the Prospect Film Room. Your #1 source for scouting the incomeing rookie class.