With the draft season upon us read why Philadelphia may not be a worthwhile investment when spending draft capital on a wide receiver. Jalen Reagor, Desean Jackson and Alshon Jeffrey are talented football players, but is the situation that Jalen has been drafted into a little worrying for fantasy football fans? 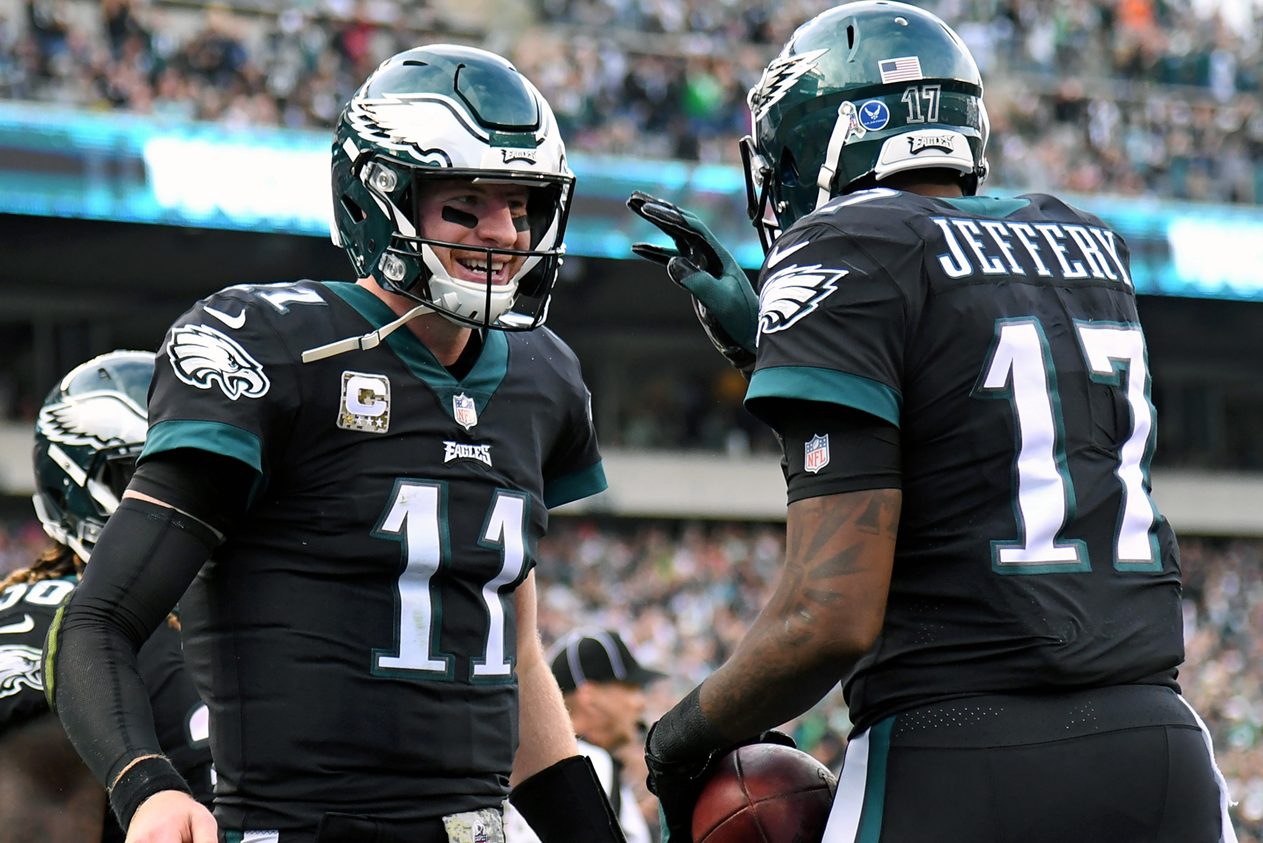 Full disclosure, this article will delve into the reasons – and the statistics behind, why I will not draft a Philadelphia Eagles wide receiver as anything more than a matchup dependent flex player.

The headline ‘Doug Pedersen, Carson Wentz, and why I will never draft a Philadelphia Eagles wide receiver as anything more than a matchup dependent flex player’ doesn’t quite have that same ‘this article could be excellent’ ring to it.

The who, the what, and the why

It seems to me that every year one or two Eagles wide receivers are overvalued in drafts. Hopefully, I’m able to give insight into why that may be a bad idea.

Any team with two top 12 tight end’s will be hard-pressed to make any wide receiver fantasy relevant. Let alone a team with a quarterback and head coach somewhat allergic to giving their wide receivers consistent volume that can be translated to fantasy success. (More on that shortly).

Regardless of draft capital spent on a wide receiver – Philadelphia never looks to make them the worthwhile draft investment. Rookie’s bias is real, and Jalen Reagor is an exceptional talent and an even more impressive athlete.

However, recent history suggests it may be a while before Reagor gives fans the production we ask for. Coupled with head coach and quarterback tendencies, it may be tough for value in Philadelphia.

Yards aren’t everything. I’m not saying an Eagles receiver can’t be fantasy relevant. But they’re a good indicator of fantasy production.

The highest any receiver has ranked in the last four seasons without hitting 900 yards is; 19th (Tyreke Hill 593 yards – although he did have high rushing volume) 2016. 14th (Davante Adams 885 yards) 2017. 20th (Julian Edelman 850 yards) 2018 and 26th (Jamison Crowder 883 yards) 2019. What’s clear is Hill and Adams may be the anomalies. Receivers require high rushing volume or high touchdown volume to warrant a top pick in drafts. Especially when receiving yards are lacking.

The previous is not just a recent thing with Wentz or Pedersen. The last Eagles wide receiver to go over 1000 yards was Jeremy Maclin back in 2014. (He had 1318 yards, prior to both Pedersen and Wentz being in Philadelphia). The last time Pedersen himself had a 1000-yard wide receiver was again with Jeremy Maclin in 2015 with 1088 yards.

Who have they had?

It isn’t like the Eagles wide receiver’s have been entirely devoid of talent either. Since Carson took over in 2016, they’ve rostered numerous high draft pick guys. First-round receiver Nelson Agholor hasn’t put up the production in Philadelphia many expected. Although 2015 wasn’t a good draft for receivers, he was taken over Tyler Lockett.

Alshon Jeffrey was a 2nd round pick who’s put up numerous 1000 yard season when in Chicago. Golden Tate, although there for a limited time, couldn’t put up the production they traded for.

JJ Arcega-Whiteside is one of many Eagles draft picks that haven’t worked out at the wide receiver position. He was drafted in the 2nd round in 2019.

Mike Wallace had put up three 1000 yard seasons in his time in the NFL. He was, however, at the end of his career. Jordan Matthews was drafted in the 2nd round in 2014. Although he also couldn’t put up the production compared to the draft capital spent on him.

Torrey Smith, another 1000 yard receiver who couldn’t put it together in Philadelphia.

Pedersen and Wentz have an affinity towards a high volume receiving tight end. Since 2013 (when Doug Pedersen became the offensive coordinator of the Kansas City Chiefs), there has only been one time where a tight end (Kelce or Ertz) or a running back (Jamaal Charles) hasn’t been Pedersen’s’ top receiver in terms of yardage. That was 2015 in Kansas City with Jeremy Maclin.

Zach Ertz is still in Philadelphia, along with an up and coming tight end in Dallas Goedert. Therefore, I don’t see a receiver being more than a wide receiver with matchup dependent upside.

However, let us compare that to three of the best offenses in football last year that each had a wide receiver rank in the top 13 on a point per game basis. (For comparison, Desean Jackson ranked 38th and Alshon Jeffrey ranked 40th). So in 2019, the Eagles gave their tight ends and running backs 57.86% of the targets. Compared to the Kansas City Chiefs, who had a 43.76% target share for tight ends and running backs. They were followed by the Dallas Cowboys with a 37.80% target share. And finally, the Atlanta Falcons with a 35.52% target share. For comparison, in 2016 (the last time Wentz played a full 16 games), the tight end/running back target share was down to 49.08%. Jordan Matthews was their highest-scoring receiver on a points per game basis, and he ranked 38th overall.

What does this show?

It is clear if you look at points per game for the leading wide receiver in any of the years since Pedersen or Wentz have been part of the Eagles organization:

They’re not worth drafting.

I advise it to be matchup dependent because the % of games where a receiver ranked WR2 or higher were spread between 4 different receivers. (Jackson, Agholor, Jeffrey and, Ward) – and no receiver produced WR2 numbers or higher more than 12.5% of the time. Compare that to 2018, in games that Carson Wentz played in Jeffrey was a WR2 in 40% of games. Alshon Jeffrey ranked 23rd in PPG in 2018 (the Eagles receivers highest ever ranking).

Let me leave you with this

My advice would be – regardless of talent and recency bias, look at the history. Carson Wentz throws to his tight ends; he currently has two stud tight ends, so consider the Eagles wide receivers’ upside when drafting them.

By all means, select one in the later rounds and start them dependent upon matchup – but be wary of what return you’ll be getting on your investment. If you want to lock into the Philadelphia offense, draft Miles Sanders early – or take Zach Ertz when you get the chance, but don’t expect an individual wide receiver to give you consistent weekly returns.

There are wide receivers around Alshon Jeffrey’s ADP I’d rather draft – Jamison Crowder, Sterling Shepard, to name a few. I’m targeting several rookie wideouts ahead of Reagor – Jeudy, Lamb, Pittman, etc. Jalen Reagor can definitely and will most likely have boom weeks – but if the last two years are anything to go by while Carson Wentz is quarterback, he’ll only be a WR2 or higher between 12.5%-40% of the time (and the latter is if he leads the wide receivers in targets).

The last Eagles rookie wide receiver had 22 targets to go with ten receptions for 169 yards. I’m not here to dispute Jalen Reagor’s talent (because we all know he’s talented). But Jalen Reagor is a receiver who only went over 1000 yards once in college. He’s on a team that hasn’t had a 1000 yard receiver since 2014. Carson Wentz gives his tight ends and running backs a significant % of the target share. I suggest maybe lowering your expectations.

Can Jalen do it? Absolutely. Will he? The situation suggests probably not. Alshon Jeffrey is only getting older and can’t stay healthy – Desean Jackson the same. The bright spot in the wide receiver room last year was Greg Ward, but with Philadelphia operating with two tight ends, it’s hard to see a situation where the slot receiver is on the field enough to see a high % of volume. If you’re banking on the Eagles offense being good this year – draft Ertz or take a shot on Goedert later in drafts (trust me, you won’t regret it).

Thanks for reading my first article for Dynasty Nerds. Do you agree? Disagree? Give me a follow on Twitter and you can tell me why I’m wrong. The DynastyGM is changing the way you manage your dynasty teams. Find out how your team stacks up against the rest of your league, see which positions you are strongest, and find a trade partner.