Down and Dynasty: AFC East 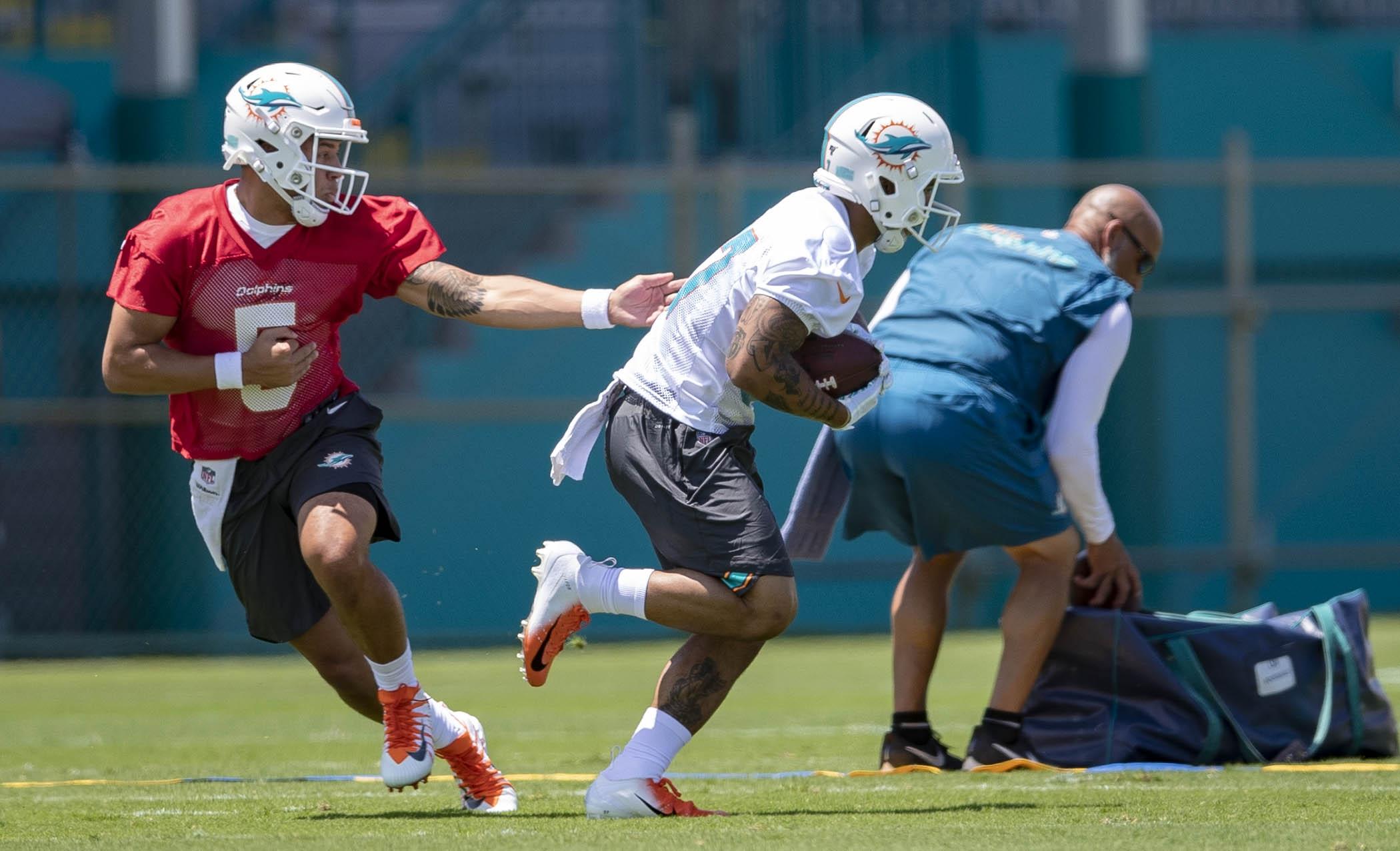 Training camp is finally underway! Football is just around the corner. For dynasty owners, it never stopped. However, now we all begin to see all of that work put into the offseason come into fruition. Back-end roster management is a perpetual pain point for any owner. Especially in-season, this skill becomes critical. More often than not, the other members of your league are just as educated as you are. This requires you to be ahead of the game and identify players to be picked up or dropped before others can. Luckily, I’ve got you covered.

The first point to bring up regarding Greg Dortch was his lackluster combine performance. It was not ideal. However, I, for one, believe that Dortch outperforms these measurements on the football field.

Dortch is a slender-framed big-play threat who could find some playing time as early as this year. Standing strong at 5 feet 6 inches and about 173 pounds, Dortch has the ability to be used as a gadget-type player at the NFL level. He should begin to see reps as a returner right away and will have the opportunity to compete for snaps on offense. When I envision a role for Dortch in the NFL, it’s one similar to that of Tarik Cohen. Now, the caveat to this is that by no stretch of the imagination will Dortch play running back and be taking handoffs consistently. There is a role, however, where Dortch is lining up in the backfield and taking a couple of handoffs a game simply to get the ball in his hands. Dortch is creative with the ball in his hands. The one true concern would be Dortch’s ability to withstand constant contact. Dortch departed Wake Forest with a dominator rating of 39.4% and an early breakout age of 19.1. He was getting plenty of touches at the college level and has no reported injury history so this lessens the concern a bit. The former Demon Deacon will also need an offensive coordinator that is willing to manufacture touches just to get the ball in his hands, similar to what Matt Nagy and his staff do for Cohen. Dortch will have a legitimate opportunity to make the Jets roster in September and is only a big play or two away from being heavily sought out on the waiver wire.

The “hot pick” here would be Preston Williams, however, that hype train has already left the station. I decided to go with a bit more unconventional pick in Myles Gaskin. Gaskin was a 7th round pick in this past draft and will most likely be RB3 on Miami’s depth chart this upcoming season.

Gaskin’s obstacles to relevancy include Kenyan Drake who burst onto the scene after the departure of Jay Ajayi and then Kallen Ballage, a 4th round pick in 2018. Drake is on the final year on his rookie deal and Ballage’s rookie season was a bit disappointing. Ballage averaged 5.3 yards per rushing attempt in 2018 on 36 attempts. However, one of those carries was for 75 yards; if we remove that carry from the calculation his average yards per rushing attempt plummets to 3.3. Ballage had a very productive career at Arizona State University and made a name for himself as a dynamic weapon out of the backfield both as a runner and as a receiver. He even posted a relative athletic score of 9.19. Ballage will likely get some opportunities to prove himself this season, but it’s not looking too bright at the moment. Gaskin left Washington with a dominator rating of 33.5%, good for the 77th percentile, and then tested out as an above-average athlete with a SPARQ score of 119.6 (75th percentile). Gaskin has the proven ability to carry the ball and be a receiver out of the backfield. If Ballage struggles early, Gaskin could easily slip into a receiving role for this Dolphins offense. There’s a good chance that Drake could be playing elsewhere next season given the current condition of the running back market. Gaskin is worth a stash simply for the possibility of a strong opportunity ahead.

As great as he is, Tom Brady can’t play forever. Or…can he? I don’t know, but I am going to assume the former and evaluate the Patriots from that standpoint. Bill Belichick and Josh McDaniels spent a 4th round pick on Jarrett Stidham in this past draft. Stidham was thought to be one of the top QB prospects entering the 2018 season at Auburn but struggled during his junior year. Despite the struggles, Stidham declared for the NFL draft. It would have been easy to make a case for Stidham to return to Auburn and develop, however, the classes to follow the 2019 one should be richer in quarterback talent. Stidham finished his sophomore season with a completion percentage of  66.5% and a rating of 151. The production was there but declined in 2018. New England must see something in Stidham considering they spent a 4th round pick on the 22-year-old. He will get an opportunity to learn from one of the most mentally proficient quarterbacks to ever play the game. There is an argument that can be made for that to be a better situation as opposed to playing another season at the college level. Regardless, Stidham is a long play and should really only be considered in deep leagues. Heck, just throw him on your taxi squad if you’ve got one. It can’t hurt to have an heir apparent of one of the most consistent offenses over the past decade ready at your disposal.

The Buffalo Bills receiving corps is a mess. They’re hoping that Zay Jones and Robert Foster can take big steps to be leaders of the group and have brought in John Brown and Cole Beasley to supplement. Currently, it would appear that none of these are legitimate long term options. David Sills, along with other receivers like Ray-Ray McCloud and Cam Phillips, will be fighting for that 5th receiver spot as well as a roster spot. Sills was a member of the high-flying Mountaineer offense headed by Will Grier this past college football season. Sills was one of Grier’s favorite targets. He runs routes well and displays an instinct to catch with his hands extended. Sills, however, has struggled to catch the ball consistently. Couple that with the fact that he tested out as an average athlete (SPARQ: 106.2; 57th percentile), it’s easy to see why Sills went undrafted. The 23-year-old is the most technically refined out of the group mentioned above and has a ceiling as a reliable possession receiver and red-zone threat. His skill set is a bit different than those of the 4 receivers definitively ahead of him and that could help Sills to carve out a role himself. It’s difficult to imagine Sills having much, if any, impact this season. But, given sometimes working with NFL coaches and focusing solely on football, there is a path to fantasy relevance for Sills.