Down and Dynasty – AFC South 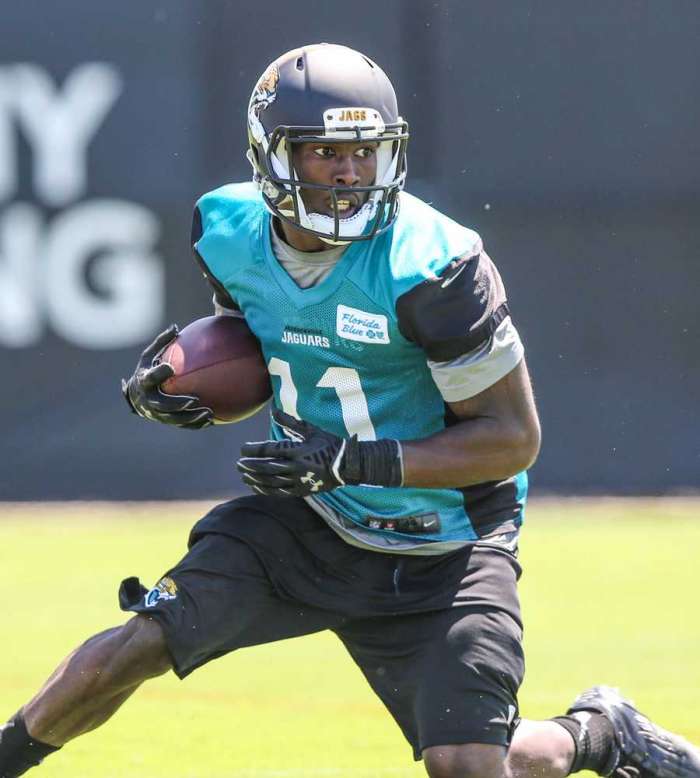 We approach the end of our Down and Dynasty series with a look at the AFC South. With this series, we’re looking at guys buried down the depth chart or forgotten in the rankings. The AFC South has had the Colts serve as the dominant team for most of this millennium, but with the Jags making a deep playoff run two years back and the offensive firepower down in Houston, as well as the underrated talent of the Titans at every position besides quarterback, this is an interesting division to follow for the next few years. Below, I highlight a cheap piece of the action for each team to consider investing in. Tweet me @thesofascout if you want to dig even deeper with analysis for your team.

Dion Cain entered the scouting season before the draft last year with incredible hype. Coming out of “WR U” at Clemson, Cain ran a 4.43 40 yard dash and got through the 3-cone at a blazing speed of 6.71 seconds at the NFL combine, ranking in the 77th and 84th percentiles respectively. At Clemson, he flashed big-play talent while enduring some off the field maturity issues as a Freshman. In his sophomore year, Cain had a big season with 9TDs and a monstrous 19.1 YPR before taking on a bigger role in the offense during his third and final year, but suffering a big drop in efficiency after Watson had departed to the NFL. Perhaps this is why the NFL looked past him as well – he fell until the 6th round before the Colts finally drafted him with the 185th pick of the 2018 NFL Draft. But flashes of talent suggest more upside than his draft capital. In camp last year, he flashed at OTAs and impressed coaches in practices before suffering a torn ACL in the first preseason game and ending his year. The Colts tried to get by with Chester Rodgers, Ryan Grant, and Dontrelle Inman, but it was the TE duo of Ebron and Doyle who carried the load. Indy decided to retool the offense this offseason, especially at wide receiver, with the additions of Devin Funchess to a huge $10M contract and speedster Parris Campbell in the second round of the 2019 NFL draft. While there’s no denying that Campbell brings a different dimension to this offense and should play a role in the offense in the future, free agency is going to force Indy into some decisions after this year: Doyle, Ebron, and Funchess are all unrestricted free agents. They have a lot of cap space to play with keeping the tight end cupboard stocked for Andrew Luck, but this speaks to the opportunity Cain has to work his way into the offense with steady improvement this year. If he can harness consistency from the flashes of talent that jump out on his college tape and has translated the buzz-worthy practice notes from beat reports and coaches to game-day on Sunday, Cain might be the starting WR opposite TY Hilton going into week one next year. With Andrew Luck behind the helm and likely over 30 TDs a year to distribute, Cain has some major upside at a bargain cost.

Smith was a favorite mid-round rookie target in 2017 after he was drafted at the end of the third round in the NFL draft. Of course, Delanie Walker has still been getting all the snaps and targets since then, but say it with me now: “I will not expect my rookie Tight End to produce in year 1”. This position has one of the steepest learning curves in the NFL. Players need to understand the nuances of both the run and pass game and how to handle multiple assignments within each of those phases… Add in complex offensive schemes (in Jonnu’s case, multiple schemes ranging from “exotic smashmouth” in 2017 to Lafluer’s “not a good installation of McVay’s offense” last year) and it’s not surprising we haven’t seen him break out yet, especially with a veteran of Walker’s caliber blocking him on the depth chart. But Smith showed his explosive athleticism at the combine with top 5 performances in the vertical and broad jump, bench, and shuttles. His 4.62 40 time, while not tops at the position, is fast enough for the NFL, as evidenced by this 61 yard TD catch and run. He is a challenge for linebackers to cover and should be a good seam weapon. It’s not so ironic that the player he reminds me of is Walker himself, and with Tennessee factoring in the TE on offense, the scheme fit is there for a guy like Jonnu to get utilized. He’s probably been on and off waivers in your league a dozen times by now, but if you can 2 for 1 trade and free up an empty roster spot, he’s worth a look if you’re mining for guys at the position that might be able to hold down a mid-level starting tight end spot for you once Walker gets tired of season-ending injuries and hangs up the cleats and decides to leave the game with a little health left.

I mentioned at the top of the article that our deep and dynasty series takes a look at some guys that are buried on the depth chart and need a few things to break to start seizing some opportunity. Well, that doesn’t describe Marquise Lee, but his ADP certainly seems to imply it. What other WR ranked outside of the top 80 WRs (ironically one spot behind Dion Cain in our Dynasty Nerds rankings), and outside the top 200 players overall, is sitting atop their depth chart? When you want to know how a team values their players, look at the investment they make in them. Jacksonville let Allen Robinson walk and resigned Lee, whom they drafted 22 spots before Robinson, in 2014. Whether we think that’s smart or not is irrelevant: the team is telling us quite obviously they like his game. An ACL injury last year got in the way, and a horrible offensive output for the Jaguars in 2018 has people fearing to invest in this offense for 2019. Most forget however just how banged up the offensive line was. A new season returns a healthy offensive line, but we’re still waiting to see Lee take the practice field from an August ACL tear. The early occurrence of the injury means we should see Lee suit up by week 1, and with Dede Westbrook, DJ Chark, and Keelan Cole the names behind him, I think there’s a shot Lee can come in and serve as a fantasy flex starter. DeFilippo is notorious for passing the ball and will try to make the Foles experiment work, even as this team projects as a middle of the road team. At waiver wire prices, Lee is worth monitoring and scooping up if you’re looking for a guy that can fill in some deep-league value.

With the release of D’Onta Foreman, the Texans might be the most predictable offense of any team in terms of fantasy opportunity. Running back: yet another year or Lamar Miller, who’s starting to turn into the next Frank Gore as a running back just decent enough to serve as a thorn in fantasy players’ sides when we imagine the upside of what a running back could do in this offense. The passing game under the direction of Deshaun Watson will have a very narrow target funnel to Hopkins, Coutee, and Fuller at wide receiver. The Tight Ends are a pick your flavor – but aside from a few game flashes from the now-retired C.J. Fiedorowicz, this team really hasn’t supported a fantasy option at the position, so I’d rather place my chips on a bet somewhere else in the TE lottery (see Jonnu above). This makes picking a deep dive player rather difficult, and I’m tempted to just write about you should be investing in 2020 early rookie picks to grab the future RB from next year’s elite draft class. But, focusing on the current roster, there’s one player I am intrigued by, that player is Vyncint Smith, the deepest dive in the division – so deep, in fact, I would recommend you monitor the situation before adding to your bench.

The path for Smith is clear – in fact, it was laid out last year and we saw a glimpse of how he can make an impact. Coutee and Fuller are not pictures of health; they combined missed 25 of a possible 48 games across the past two seasons. The Texans need their depth chart to go beyond three deep at the receiver position, and this is where Vyncint Smith plays in. Undrafted out of Limestone College last year, his blazing 4.38 40 time fits well into Houston’s run-and-gun offensive scheme and Watson’s playmaking ability to go deep. Rarely do UDFAs make the 53 man roster outright, but Smith’s work ethic impressed coaches as he battled to make the team and showed flashes during practice. He made a highlight 35yard TD reception against the playoff-bound Eagles at the end of last year, showing the ability to slide into the roster and make a little impact. Getting game experience in year one is a good first step to build on, and with the likes of Jester Weah, Chad Hanson, and Tyron Johnson, the path to meaningful snaps in three-wide sets is just an injury away – and remember, Fuller will only be ten months from his ACL tear when the season starts, a major risk for re-injury if he’s rushed back too soon. For now, I’m not spending any FAAB to get Smith on my team, but I’m monitoring this situation and Fuller’s participation this offseason closely, and getting ready to be the first to pounce.