Down and Dynasty: Top Tight Ends and Their Ideal Landing Spots 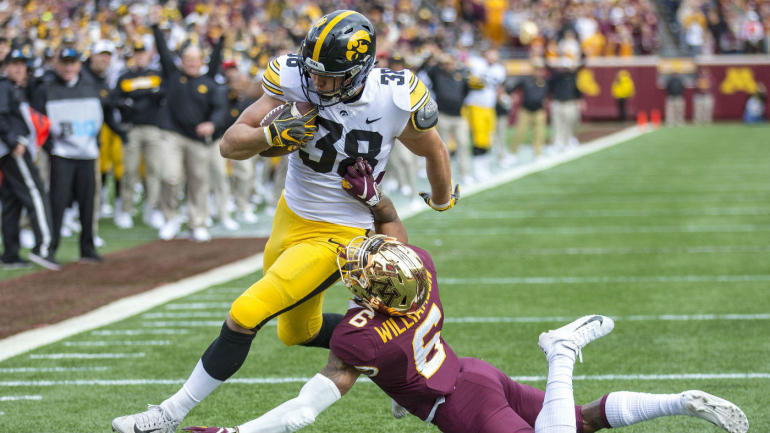 This is a top-heavy tight end class with TJ Hockenson and Noah Fant out of Iowa as the clear top two. Irv Smith Jr is in tier two by himself. After that though there is a large group of mid round tight ends that bring talent as well as a few questions that need to be answered if these mid-range guys are going to be consistently fantasy relevant. Let’s take a look at some ideal landing spots.

The most complete tight end in the 2019 draft. Hockenson is 6’5” 251 pounds and ran a 4.7 forty-yard dash at the combine. Numbers don’t tell the whole story though. He is a tenacious blocker with soft hands and great route running skills which were on display during in 2018 when Hockenson won the Mackey award as the best tight ends in college football. Hockenson lines up out wide in this clip and goes in motion to a crossing pattern and beats the linebacker

The Bengals brought back the oft-injured Tyler Eifert and still have CJ Uzomah on the roster. Springing for Hockenson at pick 11 might seem early but the versatile tight end is the missing piece to a loaded set of skill players including Joe Mixon, AJ Green, and Tyler Boyd. Andy Dalton will be very happy.

The Raiders are undergoing a complete overhaul as they prepare to move to Las Vegas in 2020. 6’4” 249 pounds, Fant ran the fastest forty at the combine for a tight end. The successor to George Kittle at Iowa Fant ended up splitting time with TJ Hockenson but still showed the potential to be an elite tight end in the NFL. Here Fant lines up in a tight wing and applies pressure up the seam for a catch.

After picking up Antonio Brown via trade and Tyrell Williams in free agency adding the speedy tight end to the arsenal will give a boost to the offense. Fant should be available at pick 24 and with 4 picks in the first 34 the Raiders have the capital to spend.

The Alabama tight end brings a well-rounded game to the NFL after catching 44 passes, averaging 16.1 yards per catch with 7 touchdowns. Smith should be able to immediately provide a reliable target down the middle has the ability to take it the distance. Smith needs to add some upper body strength to add power to his adequate blocking technique. In this clip Smith comes across the formation and shows off his run after the catch potential.

Free agent prize Nick Foles will be looking to energize the Jaguars. Adding the talented Smith at pick 38 will give the Jags a weapon that that can help open up holes for Leonard Fournette and give Foles a target that can break off big gains with the ball in his hands.

I find myself higher on Moreau than many. At 6’4” 253 pounds Moreau has the desire and tenacity to see the field early as an inline tight end. With 4.66 speed in the forty-yard dash and a 7.16 three cone he also has the athletic ability to become a two-way tight end if he works as hard on his route running as he has on his blocking. After starting for two years with quarterbacks barely completing 60% of their passes, settling in with an NFL caliber quarterback and play caller will greatly benefit Moreau’s skill set. In this clip Moreau lines up in the slot. After the snap he settles into the zone and breaks into the open area for the touchdown.

The Cardinals are in rebuild and need weapons. Grabbing the athletic Moreau with the first pick in the fourth round to grow with either second year quarterback Josh Rosen or rookie Kyler Murray puts him in position to be fantasy relevant.

A nice route runner who can separate with technique. Once he gets the ball in his hands, he can use his nose for the end zone to get up field. Sternberger is going to contribute in the passing game but has a long way to go on the blocking front which will keep him on the sidelines on early downs. Sternberger is a willing blocker so a coach that can work with him to develop his strength and technique he can turn into a three-down tight end. Sternberger runs an out in this clip and turns upfield after the catch.

Landing with the Steelers at pick 52, Sternberger will slot in behind the inconsistent Vance McDonald and the ordinary Xavier Grimble where he will have an opportunity to flex his pass catching chops.

I will return next week with the tight ends and some landing spots that I would like to see. Until then you can catch me on twitter @culture_coach and on the Fantasy Football Roundtable podcast on your favorite platform.