Draft day is one of the most important days of the year. But what happens when things don’t go according to plan? The “Draft Story” series presents, a 12-Team PPR IDP dynasty rookie draft. 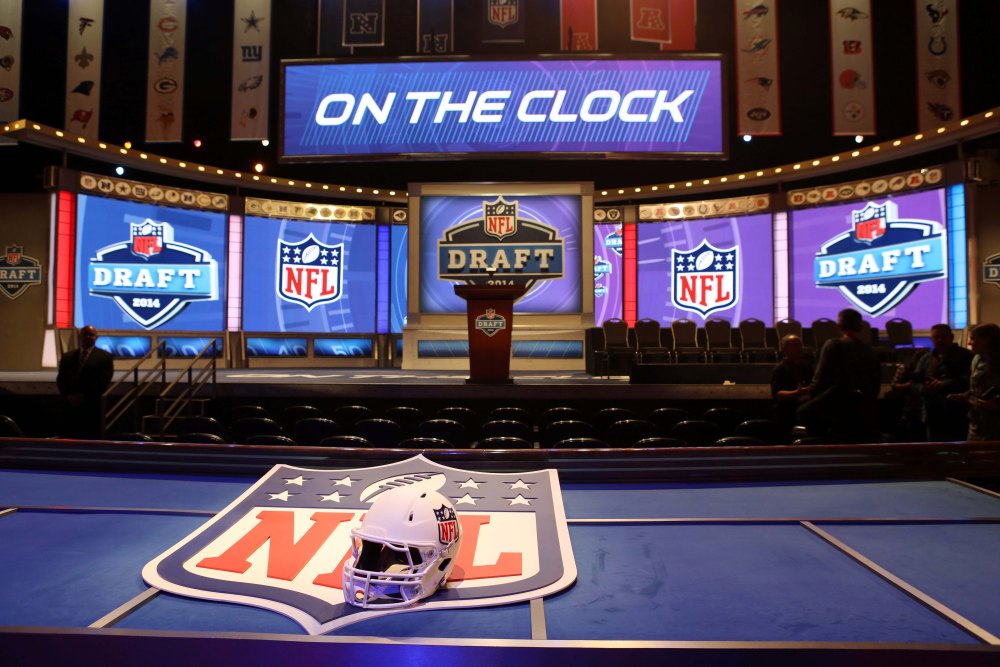 The last two weeks were a wonderful gift for many. The NFL Draft took place, and for some dynasty rookie drafts took place. I was one of the fortunate ones to have a few rookie drafts kick-off, including my favorite dynasty home league. There are about four highly active managers, four moderately active managers, and four low activity managers. The league buy-in is $50. No one is getting rich, but it keeps everyone honest.

This team has a strong lead running back but almost nothing in depth. Rex Burkhead and Chase Edmunds are sitting on my bench, and they don’t bring even a slight breeze of confidence in the desert wasteland my team has at the position. My strategy, once the NFL Draft concluded, was to leave the first round with 2 of the 6 top running backs. I had held out no hope for Johnathan Taylor or Clyde Edwards-Helaire but was hoping to land Dobbins with the 1.05 then scoop whatever running back was left at 1.09. Hoping for Akers but would have been glad to take Vaughn there as well. Then take the best WR available.

Another area of concern for my team was the linebacker position and my defensive line. With Chase Young being one of the only truly elite IDP prospects in this year’s DL class, I assumed he would be taken well before my 2.07 pick. The plan in round two was to secure the best linebacker or wide receiver on the board. Was hopeful for Kenneth Murray or Isaiah Simmons as linebacker targets and was also keen to see if Brandon Aiyuk or Laviska Shenault would be available. Given my team’s depth at wide receiver, the injury risk didn’t bother me at all.

I didn’t have any 3rd round picks in this draft, which was unfortunate because there was a lot of good value to be had. However, I felt fortunate to have as much capital in the first two rounds as I did, given the talent in the class. With these later picks, I planned to attack the linebacker and defensive back position. Most of the offensive talent would undoubtedly have been picked through. Still, a player I was targeting, in particular, was Willie Gay, a linebacker drafted in the 2nd round to the Chiefs. They have been in desperate need of a playmaker at the position and a sleeper for the best rookie IDP linebacker of 2020.

The first four picks of this draft went Clyde Edwards-Helaire, D’Andre Swift, Johnathan Taylor, Jerry Jeudy. I had hoped to get Dobbins with this pick and was successful. My RB corps added a high-level asset on a high powered NFL offense. In a draft the day before, I opted to take Cam Akers with the 1.05 pick with Dobbins still available. Not because I changed how I viewed Dobbins, but in that league, I also own Darrell Henderson. In that draft, it felt like securing the Rams backfield was the play for my team.

Back to this draft though. The player I wanted fell to me. Now I just needed Akers or Vaugh to fall to me at 1.09 and my draft would be going exactly as planned!

The next three picks in the draft went like this: CeeDee Lamb, Cam Akers, and Ke’Shawn Vaugh. I watched in dismay as both Cam Akers and Ke’Shawn Vaugh were taken right in front of me. I was all the more grateful to have secured Dobbins with the 1.05.

My personal style of fantasy football is boom or bust. I love the rush of a 14 point swing in my favor. The way my team is built probably conveys that. Mike Evans as my WR1 and TY Hilton and Marquise Brown as weekly flex options. Welcome to the team Jalen Reagor, one of the most explosive receivers in this draft. The DeSean Jackson experiment in 2019 with Carson Wentz didn’t come to fruition, but we got a glimpse of what could have been Week 1 with Jacksons monster 154 yds, 2 TD game. Wentz, with a quality speedster in a WR1 role, made sense as my pivot point, so I took the plunge.

As stated above, I love upside, big play, boom or bust players and there might not be a better example of that on a micro or macro scale in this draft than Henry Ruggs III. I flirted with the idea of Tee Higgins or Justin Jefferson with this pick. But I ultimately stayed true to my play style. Even though my team needed running back help, it would have been foolish not to adapt and take the best value and upside for where I was.

I’m not in love with Derek Carr, and I’m not in love with a team that’s moving cities. Short term, the upside of any Las Vegas Raider, at least in my eyes, is capped. However, it’s been evident that Jon Gruden has wanted to run a downfield offense since taking over as the Raiders head coach. He’s had Martavis Bryant, Tyrell Williams, and even attempted to land Antonio Brown in hopes of stretching the field. That plan is still very much intact as the Raiders made Ruggs the first wideout off the board in the 2020 NFL Draft.

Now this pick has a little bit of a backstory. The week before the draft, I traded the 2.09 for TY Hilton. I would have been happy to have Hilton on my team in 2020, but when I saw Young was slipping to the middle of the second, I began setting things in motion to come up. I was able to effectively leverage the 2.09 into a higher second-round pick because of the strength of my WR corps. Adding a blue-chip player and honestly, one of the only defensive linemen in this class worth owning at the cost of an aging WR2 was my favorite move of the draft. No DL player on my roster eclipsed ten sacks in 2019. A huge need had been filled.

Because I had missed out on my second running back in the first round, my thoughts were to acquire Zack Moss with the 2.07. Secure the Bills backfield for 2020 with Devin Singletary’s backfield mate/handcuff. Unfortunately, Moss was taken right in front of me at 2.06. There was some intrigue with Laviska Shenault, my original second-round target still on the board, but I made the decision that was best for my team and added another running back. Dillon is a bit of a polarizing prospect, but the draft capital and coaching staff narrative indicate he will be used more often than not and could even be the starter by 2021. Now the long wait to 4.10. Would my sleeper linebacker make it through almost two full rounds?

Nope, Willie Gay was taken two picks ahead of me at 4.08. Sad face emoji. As I was watching all those picks unfold ahead of me, I noticed Lynn Bowden was falling along with my sleeper LB. They became my unquestioned targets, and with every pick that passed, they came closer and closer. Ok, Gay went with the 4.08, but Bowden is still on the board. Deep breath. 1 out of 2 still isn’t bad after all those picks. Ope. There goes Lynn Bowden. Sigh. Like much of this draft, it’s not going according to plan. Still, I would call getting Logan Wilson deep in the 4th a win. He should see an immediate starting role with the Bengals in 2020 and was a highly touted prospect by many NFL draft pundits. Wilson, like most of my guys, has a high upside.

At this point, I want to acquire as much upside and talent as I can. Last season my team managed to make the playoffs, and part of that was on the back of the Jabrill Peppers/Antoine Bethea NY Giants safety tandem I started most of the season. Both were top IDP options, and with the departure of Bethea and the Giants chose to make McKinney the first safety off the board in 2020, I decided to keep this strategy intact. At the very end of the 4th round, this was an absolute steal for my team. McKinney could very well end up the most productive IDP defensive back from this year’s NFL draft. One more pick to go.

With my last pick in the draft, I was contemplating between Josh Uche and Kyle Dugger. In a perfect world, Jeremy Chinn would have fallen to me here. He’s a player I’m very high on given his landing spot and player comps (Isaiah Simmons). Unfortunately, he was taken a few picks ahead of me. The New England Patriots drafted Kyle Dugger and Josh Uche both in the second round. Dugger is a bit of an older prospect, so I opted to put Uche on my team and hope to snag Dugger when free agency opened up. Dugger was the very next pick in the draft. I’m happy to have landed Uche when it’s all said and done. Jamie Collins and Kyle Van Noy have both moved on, and Uche could end up a very valuable IDP fantasy football asset as soon as this upcoming season.

My team didn’t land the running back depth I hoped for, but I still view this draft as a huge success. I was able to add a blue-chip defensive player in Chase Young and two potential week winning wideouts in Reagor and Ruggs. If my running backs can stay healthy, I’m confident this team will make another playoff berth and with any luck could be championship bound. The added depth and youth at wide receiver also allow for some roster liquidity if a potential running back becomes available through trade. My team added strength to my roster in a different way than I had anticipated but still added depth.

Hopefully, my draft experience serves as a reminder that things just because things don’t go according to plan, doesn’t mean you can’t see a net gain through the draft. Adapt to the board as it comes to you. Playing to your rosters strengths instead of being dictated by its weaknesses is an understated and undervalued dynasty skillset. Make sure one of yours.

My Draft, My Story and the Quest for the Golden Ticket
Let’s Get Real – 2020 Rookie Draft – Family Style