Searching for the ‘promised land’ of dynasty championships? @Spydes78 will let you know if Alabama’s Dylan Moses can help to guide you there, in the latest installment of our #IDP draft profile series. 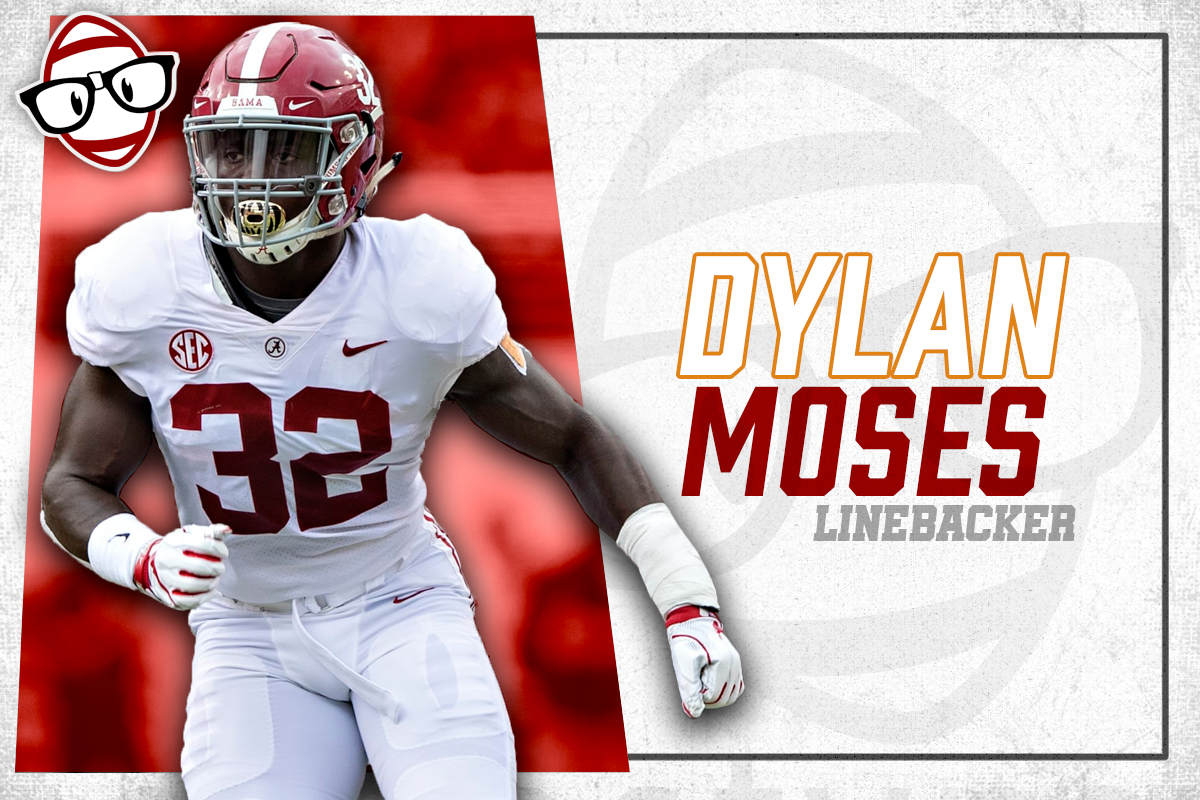 Seasoned dynasty veterans know that middle linebacker is widely regarded as the premium position of IDP. Thus, when it comes to analysis of incoming rookies, profiles of a player like Alabama’s Dylan Moses are sure to get tongues a-wagging.

With an athletic build (officially listed at 6’3” and 240lb) and undeniable talent, Moses has been on NFL radars for quite some time. However, his path to the draft has not been without adversity. After forfeiting his entire junior year due to a devastating knee injury, he was forced to battle through a painful recovery in 2020. Couple that with the tragic loss of his beloved grandmother to Covid in the same year. It’s easy to empathize with Dylan’s very real struggles. But despite the compelling nature of Moses’ personal story, as a dutiful Nerd, you’ll undoubtedly want to prioritize his talents as a football player. So, is this overachiever turned underdog a worthy addition to your dynasty team? Read on, my friend!

As mentioned above, Dylan Moses is a highly decorated prospect. In 2016, he was awarded the Butkus Award as the nation’s top high school linebacker. In the same year, Scout.com ranked him 14th in their list of the top 300 high school players. He quickly became the ‘quarterback’ of his college unit, trusted as the primary communicator for the vaunted Crimson Tide defense. During his sophomore campaign in 2018, he led Alabama in total tackles and was a finalist for the Butkus Award. In 2020, after returning from a season lost to injury, he again led the team in total tackles. Moses earned recognition as an All-American en route to a national championship.

“I don’t think there’s any question… when Dylan Moses plays for us, he makes everybody around him play better. He makes all the calls on defense. I think the players have confidence in him and his understanding of the system and the scheme.”

Watching the film, you can pretty easily corroborate that among Moses’ most promising attributes are his mastery of scheme and his ability to read and react quickly. These are essential skills for an NFL middle linebacker. The clip below is a comprehensive example of Moses’ ability in this regard. Notice how he initially makes a cerebral play to sell a blitz, thereby neutralizing a blocker, before falling back into coverage. Then, he quickly diagnoses the quarterback’s roll-out, and utilizing his tremendous speed, closes in on a sack.

As a freshman coming into Alabama, Moses reportedly ran the 40-yard dash at an eye-popping 4.46s. He clearly had speed, despite his considerable frame. However, with the aforementioned injury in 2019, my evaluation was obviously mindful of whether he still possesses the ability to go sideline to sideline. I was pleasantly surprised to see that Moses did not appear to lose a step. The clip below, pulled from the Rose Bowl playoff matchup with Notre Dame, shows Moses shadowing the running back step for step on a pass to the flat before snuffing out the play for nominal gain.

Vision and speed are great, but if you can’t wrestle the ball carrier to the ground, you probably won’t stay on the field long. You certainly won’t generate IDP points.  Never underestimate the significance of sound coaching and execution of tackling technique when considering a defensive prospect.  As an elite NCAA program, Alabama has a coaching staff that can rival some NFL programs. That coaching is on full display in Moses’ tape.  He has obviously drilled on having his head up, keeping his shoulders square to the action, and effectively wrapping up after contact.  The previously provided clips both illustrate this ability. I’ve included an additional example below from Alabama’s 2018 matchup with Tennessee.  Watch as Moses reads the run play, fills the gap with great pad placement, and then executes a textbook tackle before the runner can evade him.

Moses’ ACL tear during practice in August of 2019 is the one significant blemish on his otherwise impressive resume. As I stated above, speed is still evident in his 2020 tape. However, by his own admission, he did have to fight through pain through the majority of his senior season.

Soreness during the first year back from ACL reconstruction is not unusual. It should not be viewed, in itself, as a red flag. However, in watching the 2020 film, Moses did appear to be a shade timid in his approach. It is reasonable to assume that the loss of aggression was residual to his injury recovery.

Certainly, Moses would be in good company if he lacked confidence in his reconstructed knee during his returning season. And it is logical to project that he will regain that confidence as the healing process continues. But, if there are real medical questions beyond normal soreness, and a chronic issue with the knee is, in fact, the reason for the observed hesitation… Well, suffice it to say, that would definitely be concerning.

After studying the available film and information, I am left to conclude that Dylan Moses is very much an ‘all or nothing’ type of prospect. He certainly has the talent and pedigree to be a fixture in the NFL for many years to come. However, uncertainty about his surgically repaired knee is sure to give pro scouts and talent evaluators cause for concern. With the flow of information muddied by coronavirus protocols, medical concerns such as Moses’ will only be amplified.

Draft capital will be paramount in Moses’ dynasty evaluation. If he is indeed selected somewhere around the second round of the NFL Draft in April (as is currently projected), you can infer that a medical professional familiar with Moses gave a sign-off. That should give you the same confidence that it afforded the NFL. However, if Moses starts to fall down draft boards, it may be a sign that the medical information was simply not available or, worse, that the prognosis on a full recovery was poor.

Personally, I feel that Moses is an incredibly attractive prospect. I will be looking to take advantage of any discount that his murky medical status may afford. You likely won’t need to spend more than a third-round rookie pick to acquire him. Given his top-notch potential, this is an investment you should gladly consider. Moses is somewhat landing spot insulated. Alabama frequently employs multiple fronts, and thus, regardless of scheme, minimal adaptation should be required for the linebacker to make immediate professional contributions.

I hope you enjoyed this overview of Dylan Moses and that it will be helpful to you as you prepare for your upcoming rookie draft.  As always, I would love to continue the discussion, so please comment below or find me @Spydes78 on Twitter.  And make sure to stay tuned to the many Dynasty Nerds channels for volumes of valuable off-season content.  Enjoy the grind!