IDP Nerds get Rookie Fever too! And the only prescription is more draft profiles. Get to know Miami prospect, Quincy Roche, in the latest Dynasty Nerds draft prep installment brought you by @Spydes78. 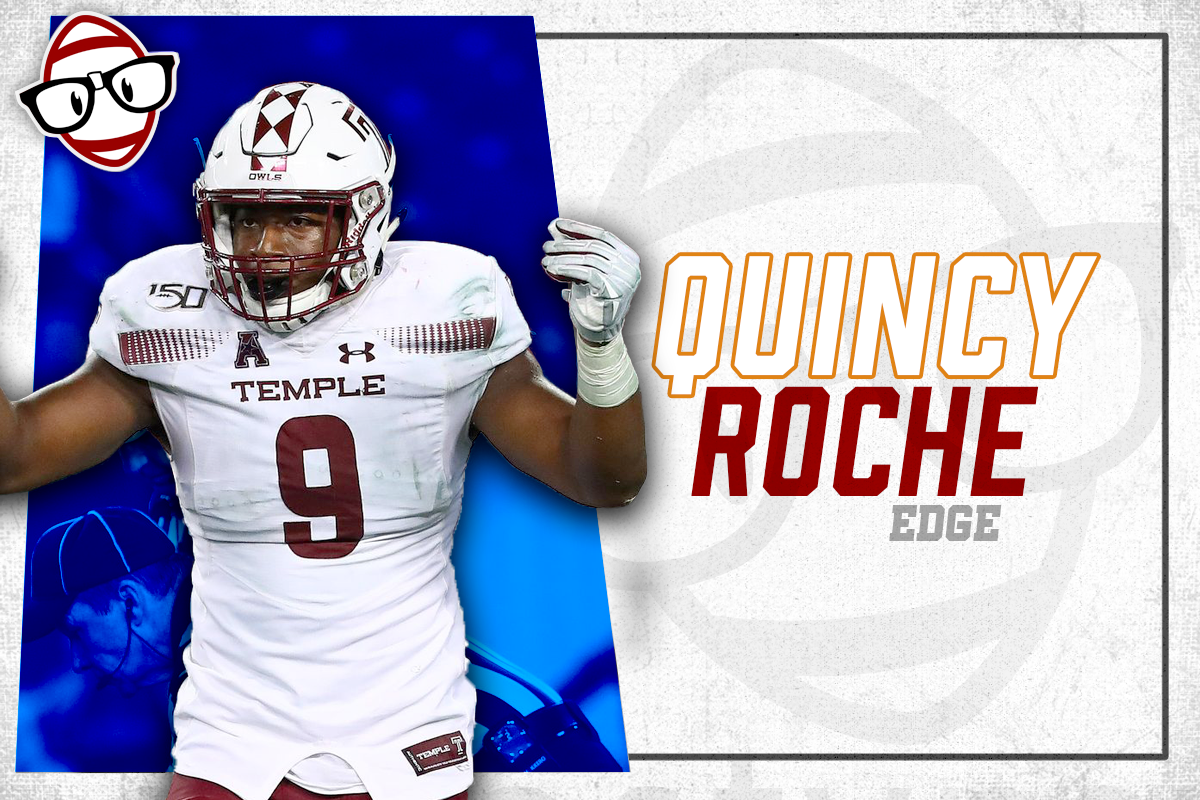 As the NFL playoffs drive to their exhilarating conclusion in Super Bowl LV, the collective dynasty community has already begun our annual rite of passage by shifting attention to the pending rookie prospects.  However, in 2021, due to Covid restrictions, the flow of offseason prospect data is shaping up to be alarmingly sparse. Making evaluations challenging to say the least.  But, fear not, friend.  This is precisely the type of situation that hardcore enthusiasts treasure.  One in which hard work shines, and to the grinder go the spoils.  And, huzzah, you have the fine team of honey badgers at DynastyNerds in your corner!  Those poor league mates of yours don’t stand a chance.  So without further ado, let’s begin our discussion of the topic at hand, Mr. Roche.

Quincy Roche is a dynamic EDGE who spent his undergraduate career at Temple University before a graduate transfer to “the U” to finish out his eligibility with Miami in 2020.  Roche, who hails from Randallstown, Maryland, is officially listed by Miami at 6’3” and 245lb. However, Temple previously had him profiled at 6’4” and 235lb.  He was tendered and accepted a Senior Bowl invite in November, and intends to participate. You will want to watch the weigh-in data to get a better idea for his current body characteristics.

During his NCAA career, Roche was consistently among the FBS leaders in the tackles for loss category. Roche had national ranks of 11th and 24th, in 2019 and 2020 respectively.  When you watch his film, you can see a propensity for backfield penetration and his statistical achievements naturally flow from this talent.  In the clip below you can see a textbook example of the chaos that Roche is capable of. He shoots the gap and blows up an RPO play attempted by Florida State during their 2020 meeting.  Obviously, tackles which result in negative yards are of a premium value in IDP (presuming an IDP123 scoring rubric). Thus the ability to disrupt offensive schemes is an attribute not to be overlooked.

Standout college prospects can sometimes rely so heavily on a talent or size advantage, that they dominate inferior collegiate competition but are unable to replicate the same success professionally.  I do not suspect that to be a concern with Roche. He exhibits sound discipline, particularly with respect to his pass rushing techniques. The first example of this sound technique is his use of hands. In the below clip, you can see the combination jab/swipe style that he most frequently employs to take away a blocker’s hands.  The offensive tackle depicted (#79 Jackson Carman, a 2020 2nd team All-American) is completely disarmed by the swipe off the line. The offensive lineman is unable to recover before Roche puts heat on the quarterback.

Another critical attribute that Roche possesses is flexibility.  Those who have been around the defensive scouting establishment may have heard this described as ‘bend’. This is a term which refers to an EDGE’s ability to flex at the hips and thus elude a blocker on their pursuit of pocket penetration.  In the clip below, you can see an example of Roche using a shoulder dip and lean to create a leverage mismatch. Which he translates to a sack.

It kills, according to the late, great Al Davis.  And, in the case of Quincy Roche, he has been figuratively killing opponents with his speed throughout his tenure on the college gridiron.  Without a 40 time to reference, I am forced to rely on the eyeball test, but my eyes show me that Roche is capable of incredible bursts in short distances.  As evidence, watch how quickly he gets past the blocking and on top of the quarterback in this clip of the 2020 Miami vs. Duke game.

The first time I put on the film of Roche, he looked so undersized that I had to verify the jersey number.  Granted a jersey emblazoned with “2” for a defensive end may have had a subliminal influence on my perspective. However, upon verifying his aforementioned measurements, I confirmed that he is indeed somewhere in the neighborhood of 6’3” and 240lb.  For reference, according to Next College Student Athlete, the average size of a Division 1 FBS defensive lineman is 6’3 and 270lb.  This is not to say that Roche cannot compete at the next level. However, I think it’s fair to say that wherever he lands in the NFL, he will likely have an intimate and immediate relationship with the strength and conditioning coach.

Though there are sterling examples of Roche’s talent, the film also shows clear instances where he is overpowered by the blocking scheme (whether it be the size of the blocker or a planned double team) and simply shuts it down.  This dovetails with the above concern regarding his size.  I have noted several instances of lackluster effort to track down a ball carrier once the play gets behind him.  As an NFL rookie, it is likely that Roche will be asked to contribute via special teams. Coordinators of this unit notoriously demand dogged pursuit and commitment of their players until the whistle.  Quincy will need to be careful to make the right first impression on his coaches by exhibiting maximum effort in every opportunity that he is granted.

Quincy Roche has the skill set to be a success at the NFL level. Despite some correctable concerns, his combination of speed and technique make him a very attractive prospect for NFL general managers. Teams are always looking for ways to improve their pass rush. The general consensus has Roche being selected within the first three rounds of the NFL draft and, based on his size, I project an opportunity at OLB in a 3-4 alignment to be his ideal landing spot. In the immediate term, I suspect that he will be utilized as a situational pass rusher during his rookie season. Roche additionally may be given some assignments on special teams.

The team that drafts him will also likely attempt to help him build muscle mass to help him hold up to the rigors of an NFL season. This will help him gradually develop him into a near every-down contributor. You may need to be patient with Roche as a dynasty asset. But, he may reward you with consistent production in the long term. Depending on your league size, I would suggest that you can target Roche in the fourth or fifth round of your rookie draft. Roche could be a perfect taxi squad stash.

I hope that you found this profile useful. I look forward to bringing you much more content as you prepare for the pending draft cycle and beyond.  Thanks for reading and keep on grinding!