How the NFL draft could impact five veteran running backs in line for increased touches in 2021. 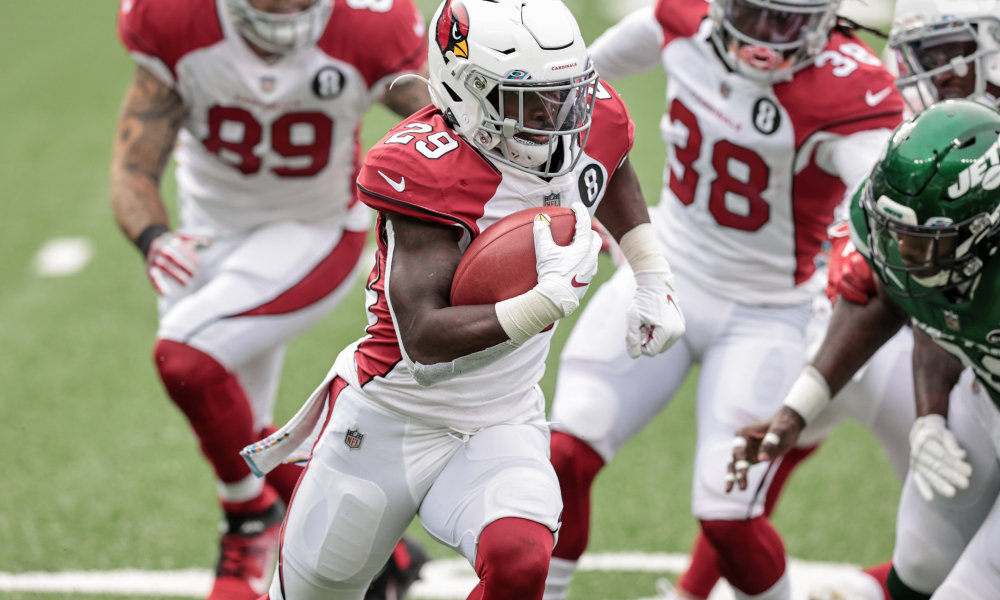 Every off-season fantasy players watch nervously as free agency and the NFL draft changes the value—and expected touches—of fantasy-relevant players throughout the league. With the wave of free agency in the rearview mirror, some fantasy players are holding out hope that the current value of running backs projected as starters or key contributors on their team will hold through May 2. But the draft is coming.

Below are five running backs in a good position now whose fortunes could change dramatically when the NFL Draft starts on April 29. Should you hold? Should you sell? Should you give up all hope? Let’s consider the situation.

Last season Edmonds split the load with Kenyan Drake, but when Drake signed with the Las Vegas Raiders, Edmonds was left as the best back standing. Cardinals’ coach Kliff Kingsbury fanned those flames by saying Edmonds can be a lead running back. When the Cardinals didn’t sign any competition for Edmonds in free agency, Edmonds remained the guy in the Cardinals’ backfield.

But will that change in the draft? Edmonds has been with the Cardinals for three seasons, and he’s never had more than 97 carries in a season. That 97 carries came in 2020, when he turned it into 448 rushing yards and a TD, seeing 67 targets that he turned into 53 receptions for 402 yards and four TDs. That was good enough for him to finish as RB25 for the season. His teammate Drake, who saw 239 carries and rushed for 955 yards and 10 TDs, was RB16. Even quarterback Kyler Murray had more carries, finishing with 133 and 819 rush yards along with 11 TDs.

Edmonds, who is just 24, did maximize his touches in finishing as RB25 and has shown flashes throughout his three seasons. Perhaps that was enough to convince the Cardinals and Kingsbury he’s ready for more. But the Cardinals have a number of picks, including the No. 16 pick in the first round. The team has added pieces on defense and A.J. Green at wide receiver this off-season and could be poised to grab a top running back to add to this backfield for a team that finished 8-8, just shy of the NFC playoffs.

The Verdict: If I have Edmonds, I’m holding him. I believe the Cardinals will add a back in the draft, but Edmonds has shown he has value even in a split. If someone isn’t a believer, Edmonds would be a great addition for a late second-round or third-round pick. But I’m not willing to gamble he returns RB1 value.

Davis signed a two-year, $5.5 million deal with the Falcons this off-season. With Todd Gurley a free agent, Davis instantly became the top back for cash-strapped Atlanta, which also has Ito Smith and Qadree Ollison on the roster. Davis, who started 12 games for the Carolina Panthers, finished as RB12 in 2020. The journeyman back, who’s played for the Seahawks and Bears, had a career year in 2020 filling in for the injured Christian McCaffrey.

As the lead back for the Panthers, Davis saw 169 carries, turning it into 642 yards and six TDs, seeing 70 targets which he turned into 59 receptions for 373 yards and two TDs. For those that picked him up on waivers, Davis became a weekly starter on his way to finishing as an RB1. Despite a middling offensive line, with a full workload in Atlanta, Davis is easily an RB2 with upside if he can duplicate what he did in 2020.

The Falcons hold the No. 4 overall pick in the draft and aren’t likely to take a running back that early. But with salary cap issues and a Head Coach in Arthur Smith whose offense produced a 2,000-yard rusher in 2020, it makes sense for the Falcons to add a young player to the position. This has happened to Davis before.

In 2019, Davis was with a Chicago Bears squad that drafted David Montgomery. Davis started Week 1 and split carries with Montgomery evenly, seeing five carries versus six for Montgomery. Davis also saw seven targets, catching six for 17 yards. It appeared the two would split the workload all season. Instead, Davis played in seven games for the Bears before being traded to the Panthers as Montgomery took over the lead role. That is the danger in Davis’ signing in Atlanta, as he could become a backup again.

The Verdict: If I have Davis, I’m selling him to someone who believes he can be a high-end RB2 in 2021. I suspect Atlanta takes a back and, at best, Davis ends up in a split in a high-volume passing offense.

Gaskin was a pleasant surprise for fantasy players in 2020. While the Dolphins made waves by signing Jordan Howard and trading for Matt Breida, Gaskin ended up being the back you wanted for the Dolphins. Gaskin took over as the starter in Week 3, and through Week 8, he was RB15, averaging 14.7 points per game. An injury landed him on Injured Reserve, but when he returned in Week 13, Gaskin rushed for 90 yards on 21 carries and caught two passes for 51 yards, producing 16.1 points.

COVID knocked him out for the following two games, but he returned with a vengeance in Week 16 against the Las Vegas Raiders. Gaskin helped end the Raiders’ playoff run, rushing for 87 yards on 14 carries and catching five passes for 82 yards and two TDs. In 10 games and seven starts, Gaskin rushed for 584 yards and three TDs, catching 41 passes for 388 yards and two TDs. In only seven starts, less than half a season, Gaskin amassed enough to finish as RB28, showing his promise if given a consistent workload.

The Dolphins head into the 2021 season with Gaskin and Salvon Ahmed, a 2020 rookie, in the backfield. Ahmed rushed for 319 yards and three TDs in six games, four starts, in 2020. But the Dolphins also have eight picks in the 2021 NFL Draft, including two in the First Round and two in the Second Round. The team has been linked with picking a running back in a number of mock drafts, which would add additional competition to the backfield, potentially cutting Gaskin’s role on the field.

The Verdict: I love Gaskin’s talent and potential. If he could stay on the field in an improving and emerging offense, he could return RB2 value. I like his dynasty potential, too. But the Dolphins will likely take a running back in the draft. With most believing the Dolphins will take a back, now is the time to acquire Gaskin at a reasonable price. Even splitting the load, with Gaskin’s explosive ability, I think he’ll return good value in 2021.

The Jets didn’t have much to excite fans or fantasy players in 2020, and that was particularly true in the running game. Star Le’Veon Bell didn’t do much before he was released, and the team didn’t find much in replacing him. A hope after Bell was released was that the Jets would give a long look to rookie La’Mical Perine, taken in the fourth round of the 2020 draft out of Florida. Perine ended up appearing in 10 games but mustered just 232 yards and two touchdowns, catching 11 passes for 60 yards.

Perine finished his first campaign with just 64 carries. He was only given double-digit carries in one game, the October 25 battle with the Buffalo Bills, where he turned 11 carries into 40 yards and a touchdown. That ended as his best game of the season. Heading into Perine’s second year, his path to carries was dealt a blow when the team signed veteran Tevin Coleman to a one-year deal.

While many dismissed the Coleman signing for dynasty, the Jets head into the 2021 draft with nine picks, including two in the First Round, the second pick in the Second Round, and two picks in the Third Round. The team has plenty of holes to fill but has also been linked to taking a running back, most likely Clemson product Travis Etienne. That represents a far greater threat to Perine’s prospects for a sizeable workload.

The Verdict: When Coleman signed, many including myself still felt Perine was the better dynasty option. But if the Jets draft a back like Etienne, it’s hard to see a clear path to a big workload for Perine. He’s a deep stash, but if I can find a true believer, I’m moving on.

Finally, we arrive at the Pittsburgh Steelers. The Steelers had a good 2020 regular season, finishing as a top seed in the AFC before being upset by the Browns at home in their first playoff game. The team has most of the core of the offense intact but starting running back James Conner is a free agent that isn’t expected to re-sign. The Steelers haven’t signed anyone else, so heading into the draft. Snell appears to be the lead back in a committee remaining for the Steelers.

Snell, a Fourth-Round pick in the 2019 draft, has seen more than 100 carries in each of his two seasons with the Steelers. He had 108, turning it into 426 yards and two TDs in 2019 before getting 111 carriers for 368 yards and four TDs in 2020. That was good enough to be RB 62 in 2020. Conner was RB 27, starting 11 games for the Steelers and rushing for 721 yards and six TDs on 169 carries. The team still has Jaylen Samuels and 2020 Fourth Round Pick Anthony McFarland in the mix, but if the Steelers rely on an internal replacement, Snell appears to be the leader.

It wouldn’t be the first time the Steelers let a starting running back leave in Free Agency only to replace from within. Conner was a Third-Round pick in the 2017 draft who stepped into a starting role when Le’Veon Bell left in 2018. And Snell has shown flashes, including Week 1 in 2020 when he rushed for 113 yards on 19 carries, taking over from an injured Conner against the Giants. The Steelers don’t have much salary cap space, which explains why the team hasn’t been aggressive in addressing the running back situation in Free Agency.

But the team has eight draft picks, including two in the Fourth Round, and have been linked to drafting a running back. That would be no surprise since the Steelers have drafted a running back in each of the last four seasons, including Conner (Third Round), Samuels (Fifth Round), Snell (Fourth Round), and McFarland (Fourth Round). It’s a matter of where one is taken. Some mock drafts have pointed to the Steelers snagging Alabama back Najee Harris at No. 24. The best back in this draft class, taking Harris would be an indication the Steelers plan to have the rookie lead their running back group.

The Verdict: Snell has been a decent handcuff and complimentary piece, showing occasional flashes the past two seasons. He’s not overly expensive, as many expect the Steelers to take a running back early. But if the team drafts a back in the third or fourth round, Snell could have a decent workload as part of a committee. Given his under-the-radar position at the moment, he’s a back I’d try to acquire cheap this off-season.

Carolina On My Mind: Sam Darnold Traded To The Panthers
Chris Godwin: an Undervalued WR1