Following in the footsteps of Adam Shaheen and Dallas Goedert, the next small school TE monster may be Adam Trautman. @DynastyJon highlights the Dayton TE in his latest rookie profile! #Dayton #NFLDraft 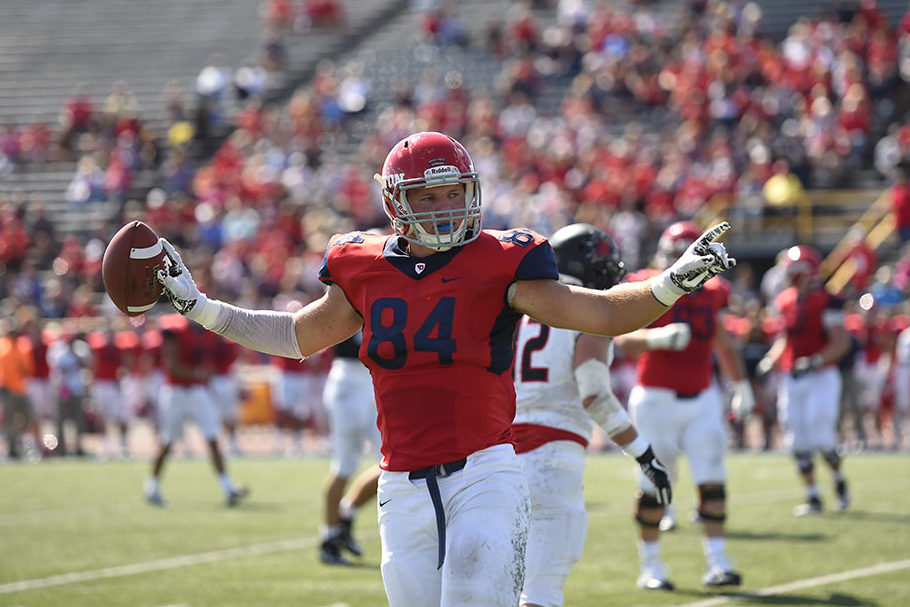 In this 2020 draft class, the next player to fit that mold is Adam Trautman. Trautman is a 6’6” 253-pound tight end from the University of Dayton. The large tight end has been flexed out like a WR regularly for the Flyers and the senior has been a key cog in the offense. His production reflects his usage as a weapon in the passing attack. In the 2019 season, Trautman reeled in 70 receptions for 916 yards and 14 TDs (Averaging 13.1 YPC). Trautman was an effective receiver in 2018 too, catching 40 passes for 595 yards and 9 TDs.

Any tight end that is used so extensively in the passing game has my fantasy interest. In particular, there were numerous games where Trautman had double-digit catches and over 100 yards. Granted, he is playing against FCS opponents, but you can see from the tape that he’s a man amongst boys.

Trautman was the team’s leading WR in 2019 and what intrigued me the most was his RedZone usage. As soon as the team was around the 30-yard mark, Trautman would move out wide, isolated against a much smaller DB, and they would pepper him with high shots. Quite often he would ‘Moss’ the DB and come down with it. A perfect example of this can be seen in the gif below.

Something else that impresses me with Trautman’s game is his ability to hold the block momentarily, to sell the run, then break away from the rusher and earn yards after the catch. This can be seen in the gif below.

Now, with regards to blocking. Trautman has been invited to the Senior Bowl and already scouts have marveled at how strong his blocking technique is. They’ve noted that he has strong blocking fundamentals and with his size, that’s a deadly combo. I’ve noticed that he can more than hold his own against interior D-linemen when on the line of scrimmage. He also lines up quite frequently at full back and does a good job holding the block against tacklers.

Something I would like to see improved on in the blocking department is the ability to drive defenders backward. Quite often I notice that he holds his blocks adequately, but there’s no Kittle-esque drive to push the defender back to the secondary. Likewise, when pass blocking, he could be a little more physical and try to catch the rusher off balance. Instead, he just seems to try and hold his ground. That may work against FCS talent, but elite NFL pass rushers will quickly dip the shoulder and get around him.

I’m very excited to see Trautman’s progress at the Senior Bowl. Playing with higher caliber players and against high caliber defenders could be a good test for him. I also, want to see how he tests athletically. I imagine that he’ll produce above-average sprint times and jumping numbers. However, I question his agility. You don’t often see him shifting sharply with short strides. Everything tends to be long stride breakaways.

Everything being said, I’ve only been able to find full game tape of 4 games for Trautman. Hopefully, as he gains exposure through the pre-draft process, more tape is unearthed. For now, Trautman really intrigues me. The receiving is the highlight of his game, particularly in the RedZone and I think a lot of NFL teams could view him as a mismatch weapon. Given this isn’t the strongest TE draft class, I think Trautman has a good chance to establish himself as a top-5 prospect at the position.