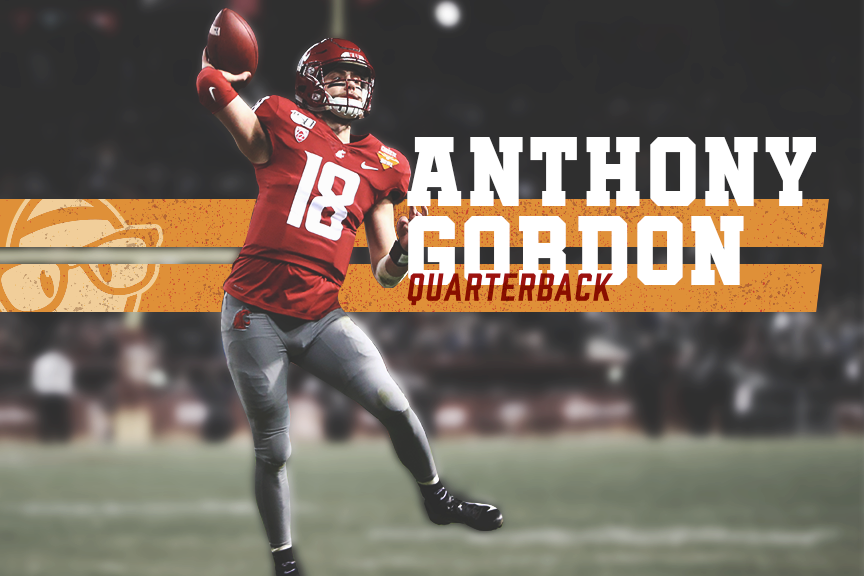 Anthony Gordon enters the NFL Draft as a redshirt senior out of Washington State. After one year in junior college, Gordon had to wait until his senior year to garner the starting job at Washington State. Gordon was redshirted in 2016 followed by not playing in 2017 kept Gordon on the bench behind three-year starter Luke Falk. As a junior in 2018, Gordon was bested by 2019 rookie phenom Gardner Minshew to be the successor to Falk.

Mike Leach’s offense is known for producing gaudy college quarterback numbers while not really translating to NFL success. In the past five years, the Washington State quarterbacks have thrown about 650 passes per year. In the era of the transfer portal, Gordon could have made a quick move out of Pullman, WA, but instead, he went to work to get ready for 2019.

Mike Leach offenses seem to use a smoke and mirrors approach to producing quarterback passing numbers, generating 689 passing attempts vs. 203 rushing attempts in 2019.

As you can see by the numbers, Gordon was highly productive in his one year as a starter at Washington State. With his predecessors in the NFL, I think it warrants looking at how Gordon compares with Minshew and Falk.

Falk was a three-year starter who had time to learn the Leach system. While Falk was injured some in 2017, accounting for his lower numbers, you can see he didn’t quite have the college production of Minshew and Gordon. Falk’s NFL performance was not great, to put it mildly.

Minshew transferred in from East Carolina as a graduate and beat out third-year player Gordon. Minshew posted the highest Adjusted Yards/ Attempt to date of all of the quarterbacks in Leach’s Wazzu tenure. The NFL and Jaguar fans have embraced Mishew’s moxie and eccentricities after bursting onto the scene as a 6th round draft pick.

Where I think Gordon separates himself is in the Adjusted Yards/Attempts. His AY/A is nearly a yard higher than Falk and over a half yard higher than Minshew, showing more willingness to go downfield.

Gordon showed good accuracy, completing 65.1% of his passes as a juco freshman, throwing for over 3800 yards with 37 touchdowns and 13 interceptions. During his senior year at Wazzu, he completed over 71% of his passes with 48 touchdowns. Gordon shows good patience in the pocket and can work through his progressions.

At the NFL combine, he measured in tall enough at 6’2,” but at just 205 pounds, he will need to add some bulk. Gordon does show good velocity checking in at 52mph, the same as Drew Brees and just behind Justin Herbert, Jalen Hurts, and Gardner Minshew. He has a compact, efficient release and is able to hit his receivers in stride like in this video below.

Gordon will be classified as a system quarterback, and rightfully so. That doesn’t mean he cannot adjust to other systems with the appropriate coaching. While Gordon is accurate and can throw receivers open when he gets pressured, his footwork gets sloppy, and his slender build causes him to lose velocity. He is not very mobile, and his accuracy on the move can be poor. Below is an example of Gordon getting sloppy with his footwork and delivering an off-target pass.

After one year starting at Washington State, it looks like Gordon will be a late-round pick at best. If he does garner some unexpected draft capital, he might be worth a late-round, taxi squad flier.

The best-case scenario for Gordon is to land somewhere he can develop behind an older vet for a couple of years. If he progresses, he could be in line to compete for a position in a couple of years. Or he could get presented with an opportunity via injuries like Mason Rudolph or Gardner Minshew.