Check out @thesofascout article going into a deep dive into this flashy under-the-radar playmaker from Liberty U. 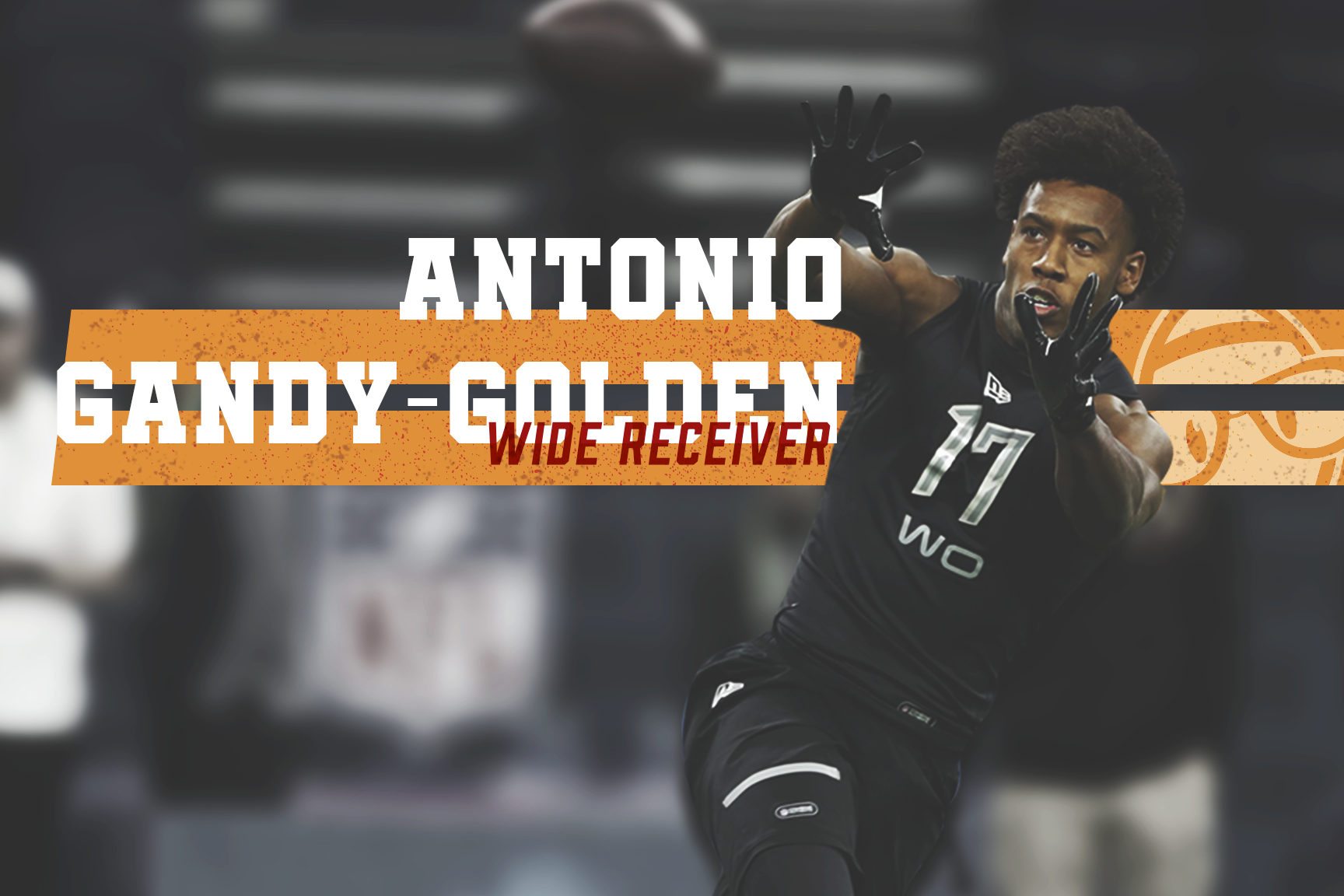 Antonio Gandy-Golden doesn’t have a flashy high school prospect profile (2-star from Rivals, a MaxPreps rank of #2437), despite an extremely productive HS career where he was flashing the same skills that let him dominate in college. Paulding County HS is not be churning out a bunch of big-name recruits.

But now, looking up Antonio Gandy-Golden, you might see a lot more info out there. However, film grinders or stat heads agree, one problem with getting a full perspective of him is a lack of tape and game logs. He only really started to pop on the radar when Liberty moved to the FBS division in college football in 2018. Previously, Liberty played in the FCS, where stats and film are hard to come by. Fortunately, you read Dynasty Nerds, and we dig deep for you. Gandy-Golden got playing time as a true freshman, getting in all 11 games for Liberty. What’s more impressive, is he truly broke out as a Sophomore at the age of 19.5 when FCS Liberty went up against Baylor in their first game of the year, putting up 13/192/2 against the FBS program. So when you see a weaker breakout age or dominator rating, it might be discounting the work he did as a younger player.

As mentioned, Gandy Golden played as a true Freshman (no redshirt seasons).

Dominator Rating and Breakout Age are arguably defined in the context of FBS teams. The competition level AGG played against at the FCS schools isn’t as talented, but then again, neither were his teammates. Still, the industry doesn’t have a good answer to handle a guy like AGG, but considering he dominated from the start of his sophomore season to the end of his senior season. Each time he played at a new level, from HS to FCS, to FBS – you see a guy working diligently to beat his opponent, whomever they are.

If you factored in his efforts when Liberty was an FCS program, he has a Breakout Age of 19.5 and an average Dominator of 31.1% (full career average market share) with his best year in 2018 at 40.3% market share.

What does all this mean? Basically, with Dominator Rating (market share) and Breakout Age (age-adjusted production), you’re looking for a guy who took the field for his team early and became the focal point of the offense. The players that do this in college will generally translate to better NFL production as well.

Even at the FBS level, Gandy Golden wasn’t playing against the stiffest competition. What did impress me was his play against a Syracuse team at the time ranked 22 in the nation. Gandy Golden abused the Syracuse cornerbacks. If his QB had the time to throw and could deliver a few more on target balls, he likely would’ve had the same huge statistical output that you saw against teams like Buffalo and New Mexico.

The Line of Scrimmage

Frequently in this game, Antonio Gandy Golden was attacked with press-man coverage. You often see college WRs making big plays in the open field, due to the spacing of the college field. What isn’t as common is a WR having a solidly executed plan of attack against press coverage.

Here you see him win by attacking with his hands to keep the defender off him as he slides by to the inside:

And in this clip, you see him use agility to get off the line. He feigns inside and forces the defender to commit and turn his hips, creating space for an outside release that also leaves plenty of room between him and the sideline for ball placement.

You won’t be confusing him for Stefon Diggs, but he also isn’t going to dance around and waste time trying to shake a man. He has a plan with a man lined up in front of him and has shown the ability to use a variety of moves to win against him.

But I can’t get through an article about AGG without talking about his best trait: physicality. You often see him dragging defenders, pulling them into the endzone like an ox dragging a plow. Here is also another excellent release from the line:

When you watch his games, there’s often 3-4 defenders on the ground around him by the time he’s tackled. He’s a monster truck that can catch footballs. One guy rarely brings him down. That physicality extends to the blocking game as well, more than most. He isn’t the best blocker I’ve seen, but he will secure his man on screens and outside runs to help his teammates gain a lane.

You will likely see a lot of aerial acrobatics in highlights of Gandy Golden. After all, those are the ones that generally attract the most attention. The current NFL game doesn’t use this aspect quite as much, but it means that he can succeed with young or bold QBs. Even though his wingspan is average relative to his height, he attacks the ball in the air is gets higher than the defender to snag it. He has particularly sticky hands. And in the redzone, he can be a bully and box out defensive backs, similar to what JJAW did at stanford.

I didn’t see extremely fluid routes from AGG. He does know how to attack defensive weak spots, especially against a zone or help over the top. He has a good comeback/sudden stop that takes advantage of defenders respecting his over the top game.

Still, his breaks aren’t the sharpest, you’d like to see him come out of them flatter. NFL safeties close faster and that extra space is vital.

He shows the ability to attack a defender’s leverage when they play off-coverage and can sit in the right spots of a zone defense. He needs to develop as a route runner, but if he can, he has an extremely high ceiling. Even if we don’t see further refined play, he can provide a role similar to Preston Williams did for Miami last year.

You would like to see AGG land in a spot with a gunslinger at QB. He doesn’t create the most natural separation, so QBs like Dak Prescott, who throw to separation rather than throw to his WRs leverage advantage over a defender, would be a poor fit. But if he lands in a spot like NYG where Daniel Jones isn’t afraid to let it rip in a defender’s neighborhood as long as he places it well – that’s where AGG can thrive.

Gandy Golden didn’t utterly dominate like DJ Moore, or Corey Davis did as prospects in smaller programs, so I don’t think he will garner attention for high draft capital. I could see a late round two to early round four window for his selection, which is enough draft capital for WRs to be relevant, though firmly out of the “sure thing” zone if there ever was one for draft capital.

The scheme fit and depth chart will be an important factor for AGG as well. Concepts that ask for versatility from the WR position, the ability to slide inside, and speed are likely not going to be a natural fit for AGG. One spot I could see him doing well in is paired up with Joe Burrow in CIN, to take over from AJ Green and eventually supplant Auden Tate.

If you take a patient approach to prospects, AGG is the perfect prospect to be patient on in the right situation. But if you’re a dynasty “day-trader,” regularly flipping high and buying low, you will likely lose patience. Monitor his progress, and pounce when he starts getting regular snaps if he’s in the right landing spot. This could take a year or two.

Thoughts? Comments? Reach out to me on twitter at @thesofascout.