Gage Bridgford (@GbridgfordNFL) takes a look at one of the most elusive wideouts in this year’s draft class in Arizona State’s Brandon Aiyuk. 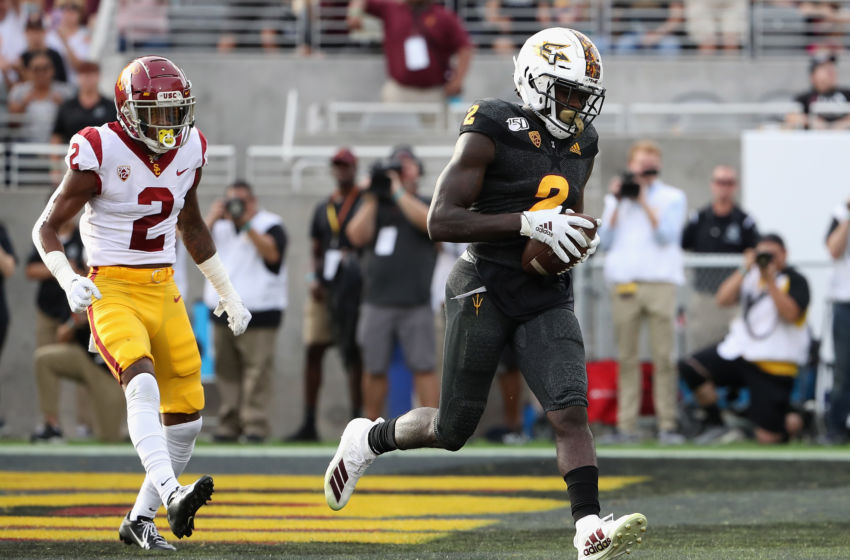 After being lowly recruited out of high school, wideout Brandon Aiyuk went to junior college for two seasons to prepare himself to make the jump to the next level of competition. While preparing for that jump, he showed off his explosiveness on a regular basis. He had four games of 200+ yards during his two seasons in school, and he racked up 2,499 all-purpose yards thanks to his abilities in the return game.

After being named a first-team All-American in junior college, Aiyuk went to Arizona State and immediately started to make a difference. He started all 13 games during his first season on campus, and he played in 12 games during his senior season. After the departure of wide receiver N’Keal Harry, his level of production exploded.

He’s coming out of college as a fluid athlete that showed his ability to make the jump from a junior college to Division 1, and he was a playmaker at both levels. He’s not going to physically dominate players at the next level, but he’s going to work his tail off for whatever team takes him in the draft. Dogs like him are the ones that can stick around in the NFL for years because they’ll outwork whoever is next to them.

In 13 games as a Junior, Aiyuk had just 33 receptions, and he nearly doubled that in one less game as a senior with 65 catches. He also dramatically increased his production in yards and receptions going from 474 to 1192 and three to eight, respectively. The Sun Devils weren’t rocking a team full of stud talents at the wide receiver position, such as Alabama, and Aiyuk was still shredding teams as the main option.

He was the model of consistency in his final season of school with just one game of less than 30 receiving yards. He had five games of 100+ receiving yards, and three of those games went for over 150+ yards. With an average yards per reception of 18.3, he was a big play waiting to happen, but he wasn’t winning on exclusively downfield routes.

He wasn’t the greatest return man in school, but he did have a fair bit of experience in that area with a combined 64 punt and kick returns during his two seasons in school. That’s the type of versatility that can keep a player on a roster when a team has a deep receiver room. Aiyuk is a solid receiver, and he can use his athleticism in other areas as well.

Aiyuk didn’t face press coverage a ton on the year because corners didn’t want to get beaten over the top by his speed. When he did face tight coverage, he showed the ability to beat it as he does on this back shoulder clip. The corner is draped on him the entire route, but he makes himself available for his quarterback. After securing the catch, he carries the defender for another five yards.

He gets a clean release off of the line here, and he immediately has the advantage. His quickness forces the defender to honor his route across the middle. Once he gets the corner to flip his hips, he breaks back outside, and he’s wide open. The NFL always has room for guys that can separate, and Aiyuk shows that ability on this play.

In Arizona State’s biggest game of the year, he had one of his best games of the season including the touchdown that would seal the game late in the fourth quarter. They’re playing off coverage with safety help over the top, and Aiyuk gets past the safety with ease before running under the ball and into the end zone.

Aiyuk is a great downfield receiver, and he consistently shows off the ability to get open by getting defenders turned around down the field. Two different defenders are shaded to his side of the field. He splits them and gets down the field. If his quarterback throws the ball ahead of him, he wouldn’t have had to slow down, and he would have walked in for a touchdown.

Aiyuk is a talented receiver that has consistently developed at every level of play that he has gone through. Next up, he’s going to be taking on the NFL. Depending on his showing at the combine later this month, he could generate some first-round buzz for himself. Even if he just posts modest numbers, he’s going to be drafted on the second day of the draft with a strong possibility of going in the second round. With his work ethic and athletic profile, he has a bright future ahead of him in the NFL if put in the right role.