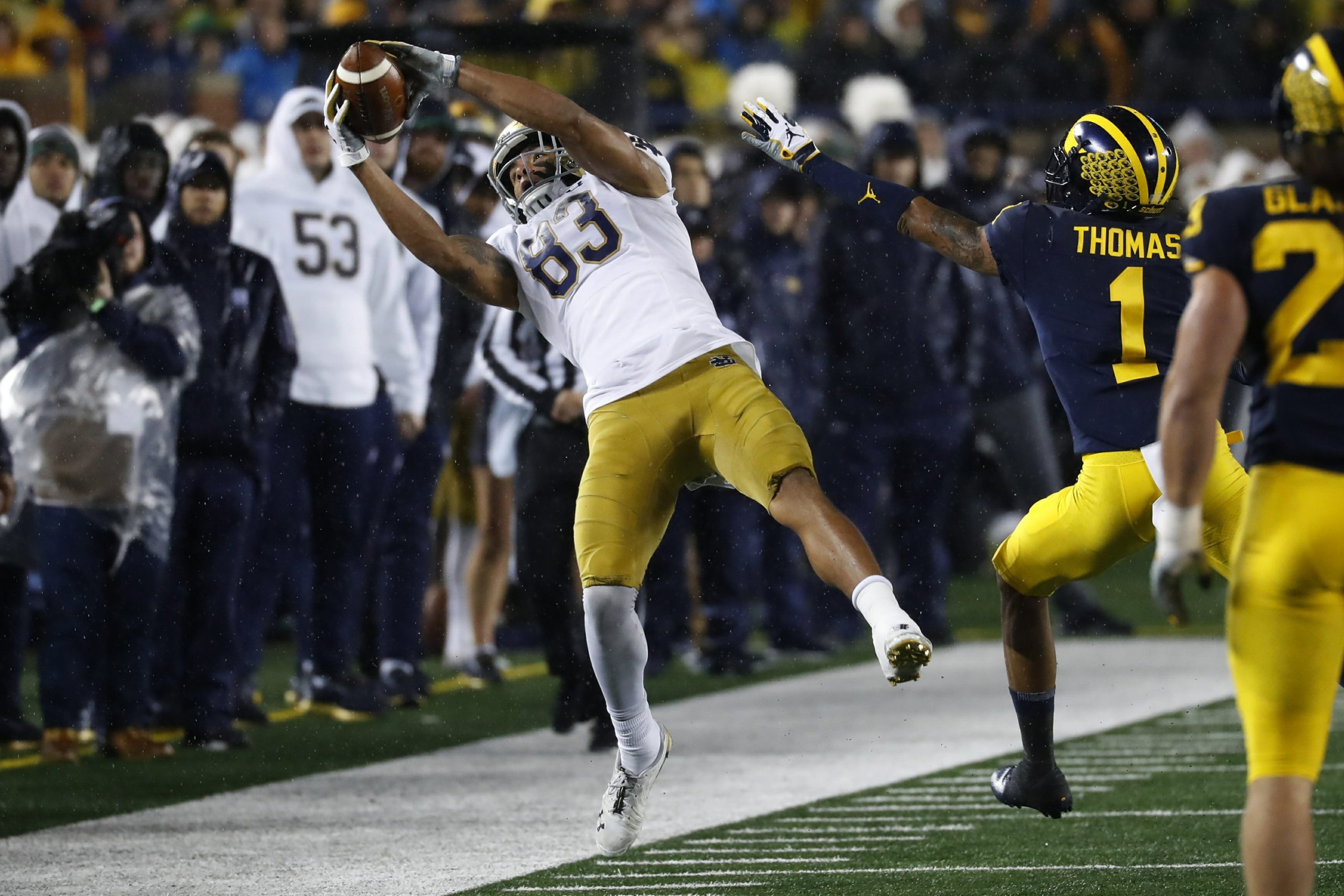 Take Off You Hoser

Earlier in the offseason I was excited to highlight a fellow Canadian entering the draft. Back then my excitement centered around Chuba Hubbard before he decided to return for another season.

Now, I have shifted my patriotic excitement to Chase Claypool. The British Colombia native has bounced onto the scene after an incredibly impressive combine. Claypool joined Megatron as the only WR larger than 6’4”, 235-pounds, to run a sub 4.45 40-yard dash. The 6’4” 238-pound wideout ran a 4.42 40-yard dash whilst also adding a 40.5 inch vertical, a 126-inch broad jump, with 19 reps on the bench. That equates to a 99th percentile speed score and a 92nd percentile burst score. The man is a freak.

At Notre Dame, Claypool had modest production until the 2019 season. Prior to that, he played second fiddle to Myles Boykin in 2018 (ironically also a combine riser, which led to a 2nd round selection), and Equanimeous St Brown in 2017. However, 2020 finally saw him take the reins and Claypool didn’t disappoint with over 1,000 yards and success in the RedZone. A breakdown of his college stats can be seen below:

The obvious intrigue with Claypool is his huge frame. For such a big man, he thrives in terms of body control and high pointing the ball. When you’re looking at the height-weight-speed WRs, it’s always nice to check that box. Particularly when the ball is thrown to his back shoulder, he always adjusts in mid-air, away from the defender, to reel it in.

And, for such a large man, he isn’t easy to bring down. Against smaller DBs, you’re going to need a 2nd tackler to bring him to the ground. This helps increase his YPR and YAC, hence his 15.7 YPR in 2019.

Quite often his catches are contested, but it makes no difference. With a superior catch radius and competitive nature, he’s rarely going to lose the physical battle. Furthermore, with such a competitive drive, his run blocking is quite formidable. His feisty blocks remind me of tape we used to see of George Kittle driving guys into the ground.

On the flip side, Claypool had a late breakout. With limited production until his senior season, his breakout age of 21.2 leaves him in the 33rd percentile.

In terms of technique, his route running isn’t elite. Claypool’s agility is average so getting in and out of breaks isn’t nearly as good as the top WRs in this class. His wiggle and balance are a little labored…All of this being said, I wouldn’t be shocked to see some DK Metcalf comps around the draft. With the rise in DK’s value lately, that isn’t necessarily a negative. However, they have similar pros and cons to their game as prospects.

Although Claypool frequently played outside at Notre Dame, many teams reportedly envision him as a “big-slot” guy. His versatility is sure to attract many teams and I expect him to be an early Day 2 selection. Given where Boykin was selected last year, I perceive Claypool to be more pro-ready, but with similar upside. NFL.com’s Lance Zierlein had this to say about Claypool, “He’s a vertical challenger outside, a possession receiver as a big slot, an outstanding run blocker and immediate coverage ace on special teams. His elite traits and diverse skill set could allow him to create a unique footprint as a pro.”

Claypool will likely be an early to mid 2nd round pick in most rookie rankings currently. If he receives early draft capital though, I wouldn’t be shocked to see him rise into the 1st round.

Houston We Have a Problem: Nuk Heads to the Desert
Fantasy Football Wins Above Replacement: The Theory