Cole Kmet received a Round 2 grade from the NFL Draft Advisory Panel. @DynastyJon takes a look at what Kmet can offer NFL teams after declaring early! #FightingIrish #NotreDame 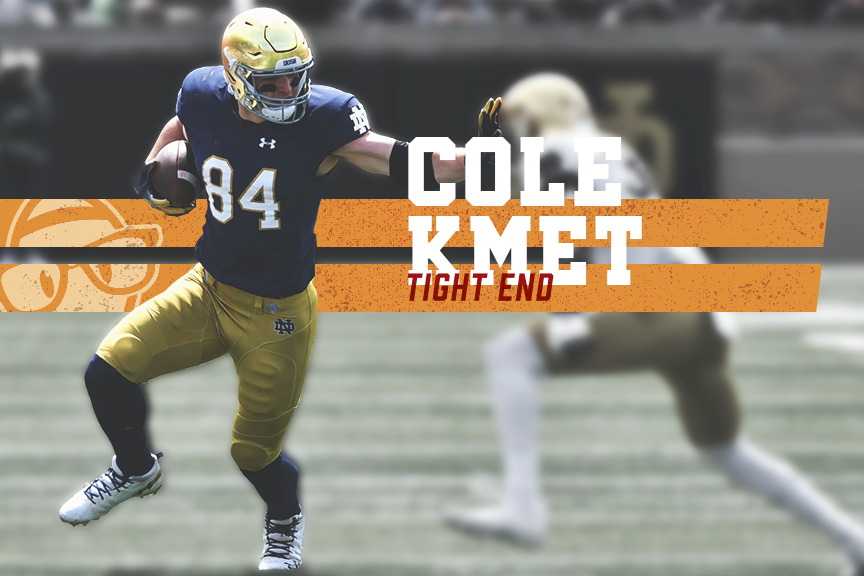 When dynasty analysts were initially evaluating the landscape of the 2020 draft, it’s unlikely that they would have expected Cole Kmet to factor into the equation.

Kmet was expected to return for the 2020 season at Notre Dame, as the Junior struggled with injuries through the first 3 years of his career. In 3 years at Notre Dame, he was only able to play in 23 games. However, Kmet received a Round 2 grade by the NFL Draft Advisory Board, which swayed his decision to declare early. It somewhat makes sense, given that this class doesn’t have an elite tier of top TEs.

A few talent evaluators have Kmet locked in as the top TE selection in this draft class, and most would have him near the top with the likes of Brycen Hopkins, Hunter Bryant, and Harrison Bryant.

Kmet’s only real season of reasonable production was in 2019 when he caught 43 passes for 513 yards and 4 TDs. His 2018 and 2017 seasons left lots to be desired, but again, that can be attributed to the injures. A breakdown of his college stats can be seen below:

When it comes to tools, Kmet is rather well-rounded in comparison to other top TEs in this class. He’s not merely a receiving threat but can contribute in all facets of play in order to stay on the field longer.

Measuring in at 6’5” 250-pounds, Kmet has a Travis Kelce-esque build and perhaps the most obvious trait on his tape his ability to stay on his feet and churn out extra yards. He’s a powerful runner with the ball in his hands and it makes it quite difficult for one defender to tackle him. It usually takes a gang.

Kmet has pretty impressive athleticism for a big man too. I love seeing how he accelerates passed linebackers into the second level. He’s a dangerous seam target and does well to hold on to the ball through traffic.

I don’t believe Kmet’s agility is elite. He doesn’t get in and out of breaks sharply, however, he has a good receiving IQ. He’s able to find gaps in zone defense and gives his QB a reliable option. I loved that he could lineup all over the field. Notre Dame showcased his versatility. He was able to line up in the slot, in-line, or as an H-back.

Perhaps the most frustrating thing I noticed on tape was just how many times his QB would miss him on wide-open deep catches. It left me reveling for the stats he could have had if his QBs vision was a little better. Ian Book did him no favors in that regard.

When it comes to blocking, Kmet may be a little raw, however, he gives a ton of effort. The first step to becoming a competent blocker at this position is effort, and he has that in abundance. He can hold his own against rushing outside linebackers and his large body is often enough to get the job done.

In my opinion, his pass blocking is better than his rush blocking. Sometimes in the run game, he does lose where the runner is occasionally, so his angles are a little askew.

As I had mentioned earlier in the article, the big frame TE also has a bit of an injury history. He’s had elbow, collarbone, ankle, and leg injuries. That being said, they seem to be one-off problems rather than recurring issues.

Where Kmet may separate himself from the rest of the field is the fact that he’s truly a Tight End. Many of the other so-called Tight Ends are really just large Wide Receivers. Kmet is a little more traditional in that regard. In the realm of NFL where play-action is becoming so important, his ability to block, and run routes out of an in-line set, or out of the backfield, could go a long way to getting early snaps and targets.

For me, Kmet isn’t necessarily the TE1 in the class as I’m struggling to separate the top tier. His draft capital will likely go a long way to determining his ultimate rookie value.