Darrynton Evans… is he for real? Or is he just taking advantage of playing in the Sun Belt Conference? @NFLDraftDynasty takes you through the film. 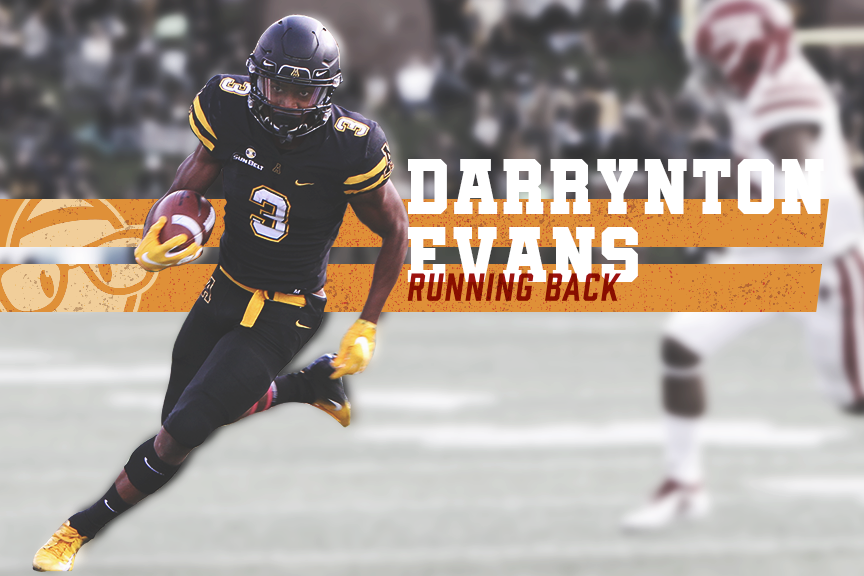 Darrynton Evans had some eye-popping numbers this year against the NCAA’s lower level of competition but meanwhile doesn’t have the same stats against the top schools. Is he for real? Or is he just taking advantage of playing in the Sun Belt Conference?

After two years in a row with over 1,000 yards rushing and 25 TDs, Evans leaves a successful Appalachian State program that went 13-1 with a bowl win over UAB in 2019. Darrynton is exciting with the ball in his hands, and always a threat to make a big play. Projecting these athletes to the NFL, there’s a lot more to a successful running back than an electric track record. Let’s check the tape.

Evans is a good athlete on tape, yet his testing numbers still surprised many. His 4.41 40-yard dash looks good along with his size, and there has been a lot of buzz surrounding him since then. His athleticism shows when he has space to run, meaning he can be deadly on outside runs where he gets to race to the edge and try to turn the corner.

This runs shows good burst coming up to the line of scrimmage, but the difference maker for this play is the fluidity and power that follows his cut. Once the safety starts over-pursing on the outside, Evans cuts back inside his tackle, who is taking a block through to the second level and has plenty of room to do damage. His quick cut loses no momentum and is one clean movement. That ability is so valuable at the next level when the game is a matter of quarter-seconds and inches.

Darrynton also shows great contact balance on film. He has a good pad level and uses his momentum to spin out of tackles and keep his feet to gain extra yards. While not the most powerful runner, he has plenty of power in his legs when he chooses to keep them moving.

There are some concerns for Evans, however. On inside runs, there can be a lot of hesitation in hitting the holes that come with contact, and he doesn’t churn his legs as consistently as he should when stood up. While not afraid of contact, he certainly seems to do his best work on the outside and in space.

Darrynton doesn’t have much experience catching passes out of the backfield, setting his career-high in 2019 with 21 receptions for less than 200 yards, but we’ve seen what he can do in open space. He can be a factor in the passing game with basic flat routes, swings, and screens, but anything beyond that, he’ll have to develop his technique.

Meanwhile in pass protection, Evans’ tape shows a player that needs a lot of improvement to see time on passing downs at the next level.

In his three years at Appalachian State, Evans returned a total of 60 kickoffs, taking three of those to the house (one in each year). This experience is invaluable at the next level because it’s crucial as a mid-late round rookie to show off a wide range of abilities. The difference in making a roster can come down to special team’s experience, and it could also be a way of catching the coach’s attention.

Being able to return kicks is great for showing off Evans’ playmaking ability:

Darrynton Evans is picking up lots of momentum in the pre-draft process, and the fact that pro days are getting canceled left and right likely improves his draft stock. He put up great numbers at the combine, and those are the only numbers that will stick with team this offseason. The tape looks good, and there has been a lot of comments regarding his strong character in the locker room as well. I’ve seen anywhere from the 3rd round to the end of Day 3, for his draft slot projections. Most likely, a team will take him around the 5th round, and he can go into training camp vying for a secondary role. Evans’ mixture of power and speed is going to make a couple of teams fall in love with him during the middle rounds.

Evans is undoubtedly going to be on a team in the coming 2020 season; the question will be if he is the RB2 or the RB3/Kickoff Returner. This difference will be huge for fantasy purposes as he will certainly be worth a dynasty bench position with limited touches. For the most part, though, he will go near the end of your rookie drafts, unless he ends up with Day 2 draft capital, making him a great candidate for any flier picks you have in the final rounds.