Miami’s do-it-all running back entered the 2020 NFL Draft. @NFLDraftDynasty takes you through his skillset and what he’s worth to your fantasy team. 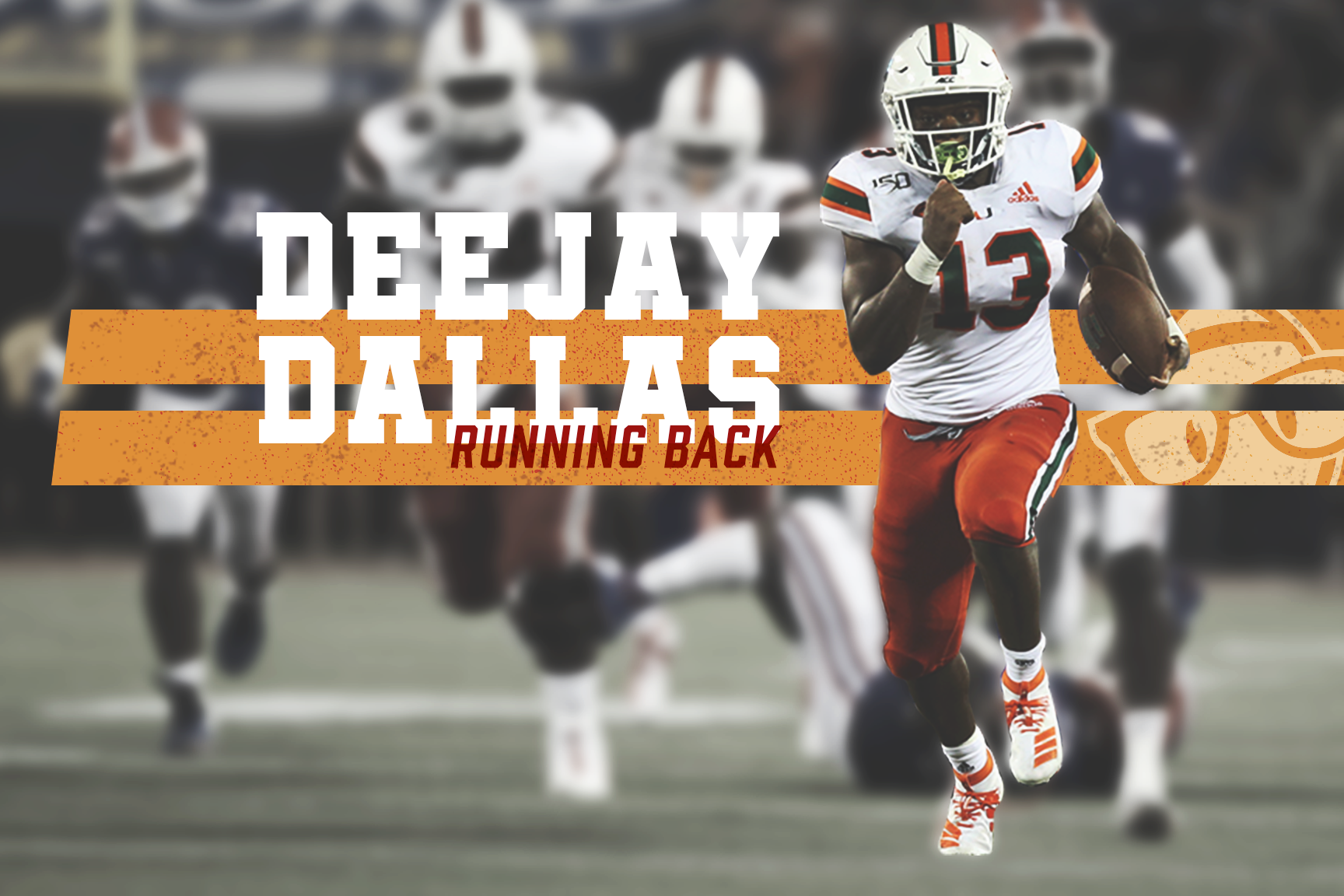 DeeJay Dallas took over the starting role for the Miami Hurricanes in 2019 after spending 2018 as Travis Homer’s backup. While the team finished the season with an underwhelming record of 6-7, Dallas played an integral part in the offense, both in the running and passing game. A dislocated left elbow against FIU cut his 2019 season short, but Dallas ended the season with 693 rushing yards (6.0 y/a), 14 receptions, 140 reception yards, and 10 total TDs for the Canes. This production certainly doesn’t jump off the sheet at you as a great NFL prospect, but nonetheless, DeeJay Dallas is a sneaky pickup in the mid to late rounds in a running back class that has recently grown a bit thin.

The NFL is always looking for players like DeeJay Dallas; a more “jack-of-all-trades” style running back, he won’t necessarily wow you with blazing speed down the sideline or impressive spin moves but he gains yards and he is productive on and off the ball.

At 5’ 10” and 215 lbs. DeeJay Dallas has ideal size for the physicality of the NFL, and he already knows how to use that frame to his advantage. He’s a true downhill runner who isn’t afraid to run between the tackles and get the tough yards, though one he gets his lower body up to speed he can run through the second level and get you chunk plays. He does a great job of always churning his legs to make sure he can move the pile, fall forward, and get the extra yards.

There are certainly some doubts about his overall speed and burst, but he doesn’t seem to be on the slow end, more likely somewhere in the middle, and his strength and power more than make up for it. He came into college at 190 pounds but now at his current playing weight (215) he has a great blend of power and speed.

One of my favorite things about Dallas is his ability to put his pads down and bounce off  of incoming tacklers. There’s a lot of power in his feet and when he puts his head down he can bowl over linebackers and safeties.

He plays to his strengths, keeps the ball tight to his body, and is always looking ahead. He’s a patient runner who is not afraid to take a second behind the line of scrimmage to wait for a hole to open up, but at the same time is quick to hit a hole hard if it opens up in front of him. His ability to see gaps and skinny up through the tight spots gives him an advantage over players who may be a bit faster.

Don’t let his career receptions (28) fool you, DeeJay is a true three-down prospect, and his best skill may be his ability to protect the quarterback on passing downs.

No stranger to sitting in the pocket while his quarterback looks down the field, Dallas has a lot of experience guarding his QB, a skill NFL evaluators value much higher than fans and fantasy players. His ability to always get a piece of incoming blitzers (whether on a check & release route or as a pure blocker) is invaluable in gaining a position on an NFL team as a change of pace back. In the NFL coaches will work with him to rely more on his base and hands as a blocker rather than throwing his body into defenders, but the effort is there.

Dallas can do more than just block on passing downs though, as he played WR in high school and has seen plenty of downs swinging out of the backfield. Despite his lack of “home-run threat” speed, he can make things happen off of screens using his agility and vision.

In the open-field Dallas uses his ability to read blocks and angles to find the open lanes and get down the field. Despite his larger size he can play skinny and fit himself between engaged defenders to make the most of his teammate’s blocks down the field. He also has an experience of returning kicks and punts, and in 2018 showed off some lateral ability and his nose for finding running lanes.

The one knock on his ability as a pass-catcher is that the film only shows off his ability to run screens and check-downs out of the backfield. We didn’t see him get the ball in other ways despite sometimes lining up out wide or in the slot, hopefully, something he can show off during the draft process or early in the preseason.

Let’s not sugar-coat it, DeeJay Dallas is not going to be a first-round pick in the NFL Draft and he won’t likely be one in your rookie draft either. But this kid shows a lot of ability to do the right things and, despite a middling amount of production in college, produce at the level likely expected out of a mid-round pick.