Eno Benjamin is one of the most electric athletes in this class. He’s certainly not without his faults though. @DynastyJon explores the Sun Devils RB and what he offers at the next level! 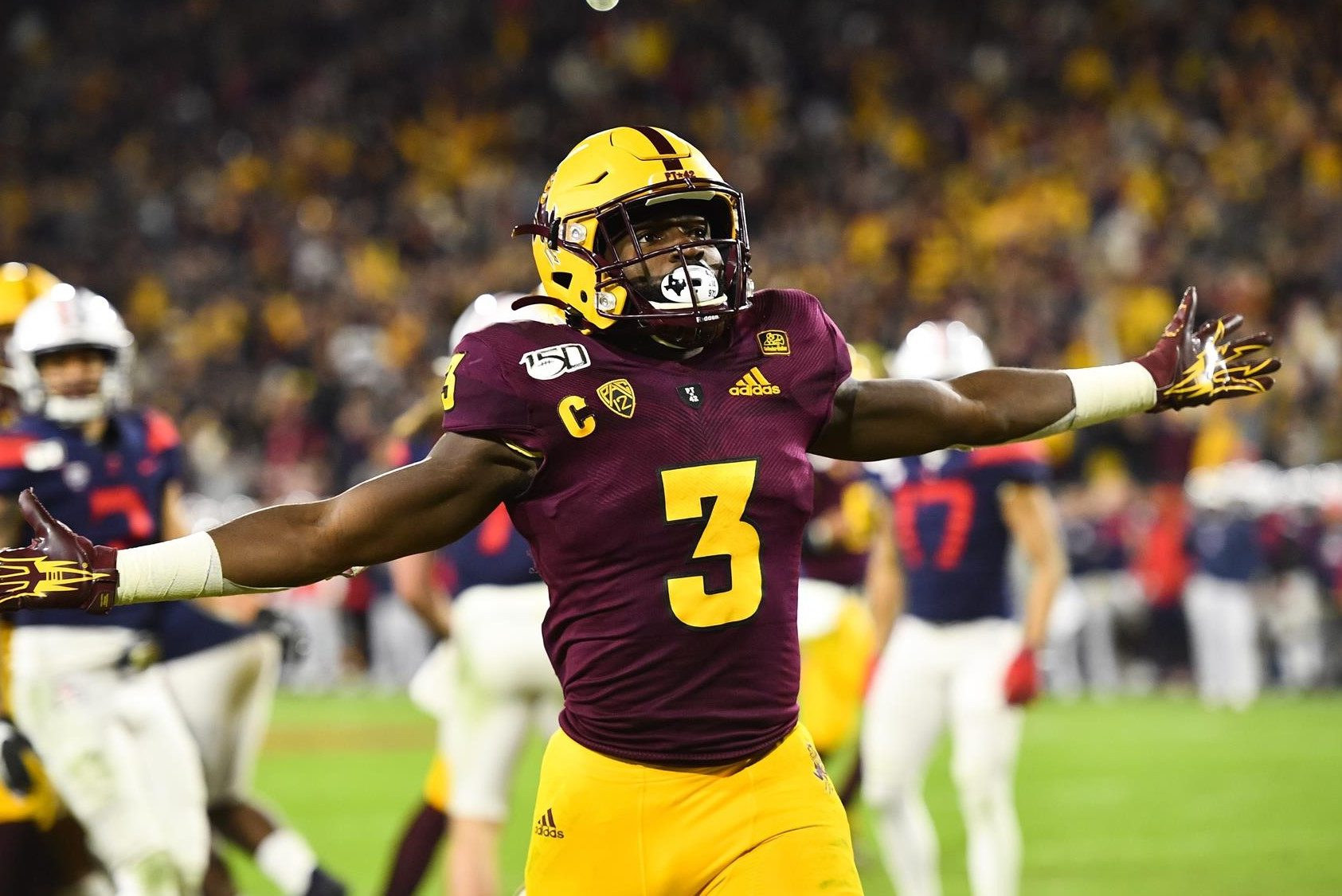 Let me preface this article by stating that I’m a big believer in Eno Benjamin, but he’s certainly not without his faults. Many Devy owners were high on Eno prior to the 2019 season too, however, a ‘down’ 2019 campaign has seemingly caused him to slide in the rankings of most dynasty analysts.

Benjamin had a fantastic Sophomore campaign where he had 1,642 rushing yards, 18 TDs, averaged 5.5 YPC, and added 35 receptions as a 19-year-old. He was therefore touted as one of the next elite college football RBs but didn’t quite live up to the hype in his Junior season. In 2019, he regressed in rushing attempts, rushing yards, TDs, YPC, and receptions. A full breakdown of his college statistics can be seen below:

Despite the regression in the box score, there’s still plenty to love with Eno. I believe that a large factor in the decline was due to poor O-line play, rather than diminished talent.

So, regarding Eno’s talent, firstly, the 5’10” 201-pound RB possesses elite physical traits. He’s incredibly athletic and in any other draft class, his agility would be second to none. His cuts and jukes are so impressive, making him incredibly difficult to bring down. He’s shifty and quite elusive, but also able to hit the gas pedal as soon as he sees a hole. You can see his cuts in the gif below.

I love that Benjamin runs angry; almost like Derrius Guice and doesn’t shy away from contact. However, sometimes that can be his downfall. He goes 100% on every single rush and lacks a bit of patience for runs to develop. Quite often you see him sprint right into the back of his O-line (see below).

Looking at the box score, you may be impressed (and rightly so) by the fact that he had 77 receptions in the last 2 years. Once he gets the ball in his hands, he’s able to make guys miss and churn out big yards after the catch. That being said, he’s not a natural receiver and he tends to body catch. You can see from the gif below; he just looks a little uncomfortable sometimes.

That being said, I feel like patience is something that could be learned with experience. If he was more patient catching passes, rather than being too eager to turn upfield, or more patient with rushing lanes, then he could be far more productive. I believe that’s a mental trait that can develop. But you certainly can’t teach his athleticism.

At 5’10” 201-pounds, he’s a little undersized. Ideally, you’d like to see him add 10 pounds, whilst maintaining his explosion. A large majority of the top 10 RBs in this class are at least 210-215 pounds. He has the potential to be a 3-down player at the next level, but it’s hard to do that when you’re slender…..unless your name is Phillip Lindsay.

I currently have Eno Benjamin ranked as my RB8 in this class behind Dobbins, Swift, Taylor, Etienne, Moss, Akers, and Najee. At that range, I predict he’ll be an early 2nd round pick, but his tier is very fluid with the likes of CEH, Ke’Shawn Vaughn and Lamical Perine right there with him.