Jacob Eason is one of the most polarizing QB prospects in the upcoming NFL draft. @ReflipeWThenuz is here to break down the player and his film. 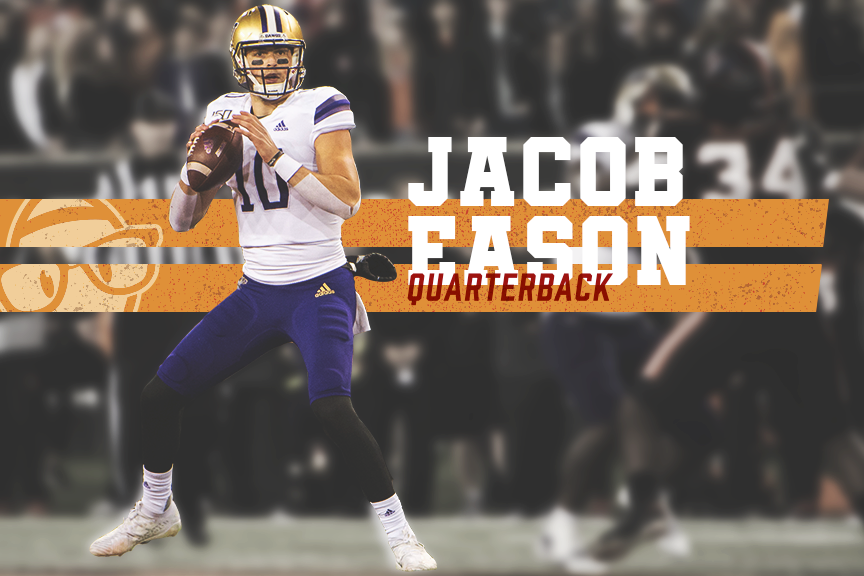 Jacob Eason is a polarizing player if there ever was one, once seen as a can’t miss prospect, yet now drawing mixed reviews. The son of a former Notre Dame WR, Eason has football in his blood. Coming out of Lake Stevens High School in Washington, Eason was considered the top Pro-Style QB prospect in the country by many recruiters. His resume was further bolstered when he was named the 2015 Gatorade National Player of the Year. The future seemed bright for the QB. Eason essentially had his pick of the litter, being recruited by Georgia, Florida, Washington, Colorado, and Alabama. He eventually chose to head East to the SEC and the Georgia Bulldogs.

At Georgia, young Jacob Eason was seen as the future face of the program. As a true-freshman the kid from Washington helped guide the Bulldogs to an 8-5 record and Liberty Bowl victory. On the heels of a somewhat successful maiden voyage ‘Between the Hedges’ Eason was in line to grow with the team heading into his sophomore season.

Fate had another story in mind. During the teams week 1 victory over Appalachian State, Eason suffered a late hit out of bounds by Mountaineer DT Myquon Stout. The hit resulted in a left knee injury, which opened the door for Jake Fromm.

In stepped the backup and the rest was history. The Bulldogs were off on a run which resulted in an SEC Crown and National Championship appearance. The door on Eason’s Georgia career was effectively shut despite sparing playing time after the injury.

After losing his job to Fromm, Jacob Eason announced that he would transfer back to his home state to play for the University of Washington. NCAA rules governing transfer required that Eason sit out a full season before being allowed to play for the Huskies.

After the requisite layoff, Eason debuted as the Huskies starter in 2019. Despite quality play from their QB Washington finished the season with a moderate 8-5 mark and 2nd place finish in the Pac-12 North. Eason did manage to make a few memories including an Apple Cup victory over Washington State and a Las-Vegas Bowl victory over regional rival Boise State. Not long after his second Bowl victory, Eason announced he would forgo his remaining eligibility and enter the NFL draft. You can see his career stats below.

Jacob Eason was one of the few QB’s who participated in every aspect of the NFL Scouting Combine. Unlike presumptive number 1 overall pick Joe Burrow, Eason chose to run through all the drills in an effort to enhance his draft stock. You can see his raw measurements below.

When you watch Jacob Eason the first thing that stands out is his pure size. He’s the quintessential image of the classic drop back QB, his 6’6 230+ lb frame the spitting image of what the NFL used to covit.

Along with that size Eason brings plenty of raw arm talent to the table. He can literally make every throw in the book. Below you can see a couple examples of his strong arm.

Another plus for Eason out the gates will be his heavy exposure to NFL-style concepts in college. Both Georgia and Washington run NFL-style systems. He is exceedingly familiar with play-action and reading defensive reactions to motion. Issues for Air-Raid-type-players such as taking snaps under center and dropping back will not be an issue for Eason, as you can see below.

While not the fleetest of foot, Eason is athletic enough to extend plays. He will certainly never be confused with Cam Newton, but Eason does a fine job of moving in the pocket or even rolling out in the flat to allow plays to develop and WRs to flash open. You can see an example of his surprising mobility below.

For all of his many abilities Jacob Eason is still a work in progress. As can often be the case, strengths can sometimes be a liability. Eason sometimes has that Brett Favre style confidence in his arm strength. While this ability and subsequent confidence in it can lead to dazzling plays, it can also lead to maddening inconsistency as you can see below.

As with nearly every young signal-caller Jacob Eason will need to continue to develop his footwork. You can sometimes see him get off-balance when maneuvering in the pocket and not have the most solid of bases when delivering the ball. These types of issues can lead to chronic difficulties with certain aspects of the game. This is something that NFL coaches will stress and attempt to help him with. All of Eason’s faults appear to be issues that coaching can address with the proper work ethic from the player.

Jacob Eason is your prototypical drop-back QB prospect, and he possesses all the requisite skills to play in a traditional NFL system. His physical skill set is reminiscent of former players like Drew Bledsoe, Carson Palmer, and Byron Leftwich. He has preliminary exposure to NFL concepts and schemes from his time at two NFL style programs.

While not a master of any one system Jacob Eason will provide NFL coaches a workable piece of clay to shape moving forward. Just how well he acclimates to the mental side of the game will determine the course of his career.

His draft stock has been estimated all over the place from the 1st round on down; I would personally anticipate him being selected somewhere between the 2nd and 3rd rounds of next month’s draft. An ideal spot for him would be a situation like the Colts where he could learn behind a seasoned vet before being thrown into the fire. If drafted in the right place, Jacob Eason could develop into a fine QB for both his NFL squad and your dynasty team alike.