@thedraftgenius hits on another quarterback from this year’s quarterback class, Jake Fromm and shows why he is set up for success in the next level. 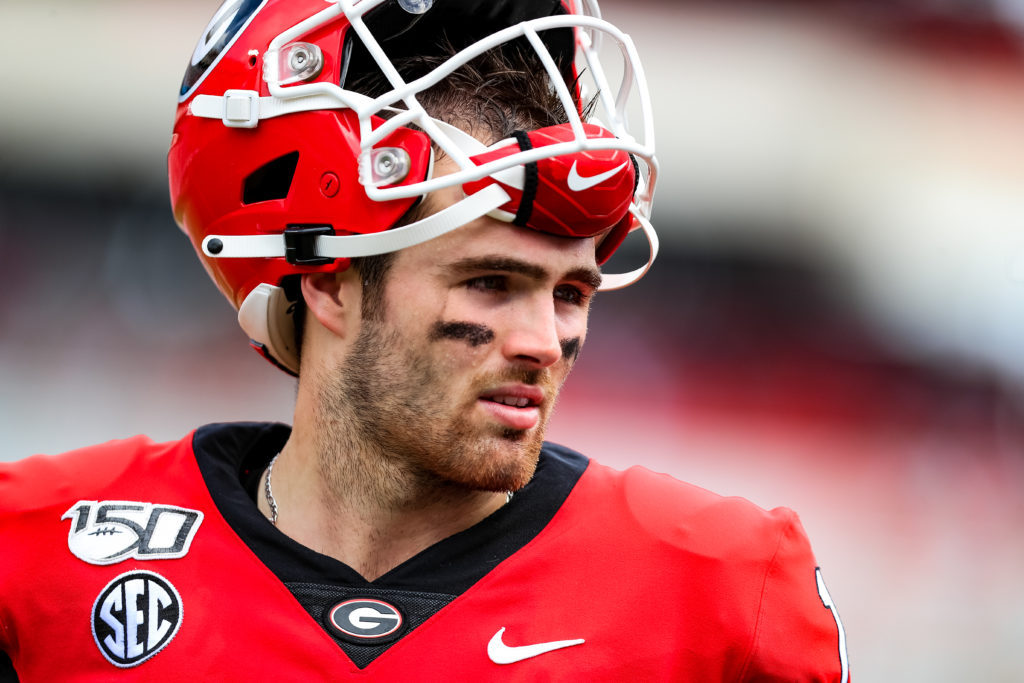 Jake Fromm’s college career will go down as one of the best in the University of Georgia’s football history books. Fromm came to Georgia as a four-star quarterback and fourth in his class, behind Davis Mills, Hunter Johnson and Tua Tagovailoa. Fromm was just as consistent in high school production as he was in college. His high school numbers, as a starter, only got better as time went on.

Upon arriving at Georgia, Fromm expected to be playing behind, then starter, Jacob Eason. Eason had just come off a rocky season as a freshman and was looking to take the next step as leader of the Bulldogs. During the week one matchup against Appalachian State, Jacob Eason injured his knee and was forced out of the game. Fromm stepped in and led Georgia to nine straight wins and a National Championship appearance. With his true freshman stat line being 2615 yards, 24 TDs and 7 INTs the future looked bright for Georgia.

The future was certainly bright for Georgia. Fromm would go onto perform well in his sophomore season and post better numbers across the board (2761 yards, 30 TDs, and 6 INTs). Putting up these stats in an extremely run-heavy offense is impressive in itself. Take into account the limit of offensive weapons at Fromm’s disposal and you see how hard it could be to put these numbers up. Fromm led Georgia to an SEC title appearance but would ultimately come in on the losing end of this game. Fromm put up great numbers against, what many thought, was one of the best defenses in college football. Against Alabama, Fromm posted 301 yards, 3 TDs, and no interceptions. His lack of help would hold him back in his following bowl game against the Texas Longhorns but again he would post a good stat line, showing he was not the key factor.

As a junior, Fromm knew they Bulldogs were set for a National Championship appearance once again. This season, Fromm was set to throw less because of the phenomenal defense Georgia had and the efficient run game their offense ran on. Fromm would, ultimately, take a step back because of his team’s offensive change. Although he would have his most passing attempts, Fromm would suffer from the change at offensive coordinator. He would tie his lowest TD mark, with 24, and hurt his draft stock in the process. Fromm would finish with the highest Gain Per Pass Attempt and Passer Efficiency Rating in a career at the University of Georgia. He would finish top 3 in multiple stats and etch his name into the history books for Georgia. Despite his underwhelming season, Jake Fromm would declare for the draft and get ready for the next phase of his career.

Jake Fromm’s poise and pocket presence remind me of Drew Brees. He protects the ball well and does not make key mistakes when the game comes down to him making tough decisions. Being in a run-first offense may have made his pocket presence look better than what it is, but his poise was something seen at all times. I firmly believe his success at the NFL level will be because of this strength.

Be sure to check out Jake Fromm’s game vs Florida on the DynastyNerd’s Film Database and see the exact poise and pocket presence mentioned above. Prospect Film Room.

Jake Fromm uses his full field of play on every passing play. He knows and trusts where his targets will be at all times. He is the cerebral assassin of this draft and is highly efficient in his read-ability. Do not expect a major learning curve for Fromm when it comes to NFL defenses.

Fromm does not have many concerns coming into the league. The right system will help him thrive immediately. The hope is he gets to play behind a great veteran quarterback (Brady or Brees) and learn some things early on so he can grow as a quarterback faster. His arm strength is the only skill that may hinder his start in the NFL. He needs to improve on big-time throws, which is key in the NFL. This will come in time and can be masked by weapons. If my draft projection of the mid-second round is right, Fromm may just find himself in the perfect situation to fix this weakness.

Fromm will be an NFL starter for years to come. I envision Alex Smith’s career being his floor. His ability to control an offense and manage a game is among the best of this class. The main factor in his success is joining a team with the right coaching staff and having a good run game to begin his career. If paired with these two things, the sky is the limit for Fromm.

As stated above, I believe Jake Fromm is an early day two prospect. The top three quarterbacks in this class are just too good for Fromm to jump in the draft. This leaves him as the fourth or fifth-best option in this class. A team may take a shot on him at the end of round one, which would be a best-case scenario for his career. My preferred landing spots are the Patriots, Saints, Detroit, and Pittsburgh. This would help him grow and form the best way possible and help him with the weapons he needs to succeed.

Fromm can very well be a borderline QB1 in the right offense. If he lands on one of the teams mentioned above, I will be drafting Fromm at the end of the 1st round in Superflex leagues, with the mid 2nd round being the latest I would take him. Consistency is key for the quarterback position in fantasy. That is exactly what you get with Jake Fromm.

You can follow me on twitter @thedraftgenius and see my rankings on Dynastynerds.com/fantasy-football-dynasty-rankings/. I am also on the DynastyWire Podcast and Sleeperwire Show. Thank you for reading.

There is a lot more to come this off-season so remember to always check DynastyNerds.com for all of your football needs!