Jalen Hurts: The NFL’s next dual threat star? Or early round draft bust? 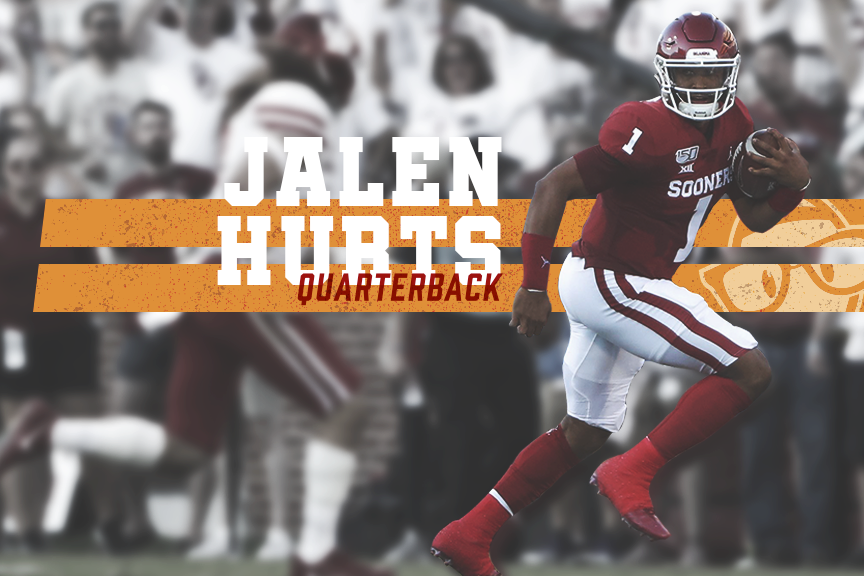 Jalen Hurts is among the most fascinating prospects in the 2020 NFL draft.

He’s the second coming of Lamar Jackson for some, a retread of Deshone Kizer for others; there seem to be few opinions landing in the middle.

His resume is jammed with high accomplishments and a few huge blemishes.

He led Alabama to a perfect season as a true freshman; he was the Sugar Bowl MVP as a sophomore, and won his team admission to the National Championship.

Yet he was pulled at halftime in that Championship, and it was freshman Tua Tagovailoa that closed the game out for the Tide.

The job lost, he backed Tua up during the 2018 season and entered the transfer portal, landing on his feet at Oklahoma as a graduate transfer.

Hurts thrived in Lincoln Riley’s system, finishing second in Heisman voting behind only Joe Burrow. Compiling a 237/ 3851/32 passing line and 1298 / 20 rushing line, Hurts led his team yet again to the CFB Playoffs.

Oklahoma was knocked out of the tourney in the Peach Bowl by eventual CFB champion LSU, a game in which Hurts struggled mightily. His 48.7 % completion rate, 217 yards passing, and failure to throw a TD in the bowl game cast a shadow over an otherwise stellar final campaign.

So who is Hurts? Is he a prospect with serious NFL talent? Or is he replacement-level player who had the privalege of playing in one of college football’s most brilliant offenses?

One thing that is inarguable is the quality of Jalen Hurts’ character. Nobody that ever played with or talked to the young QB has a bad word to say about him.

His humility and willingness to be a team player in spending a year of eligibility backing up Tua speaks volumes.

At Oklahoma, his teammates looked up to him and his coaches praised his leadership and work ethic.

NFL teams will appreciate what Hurts can bring to the table in this regard, whether they’re casting him as an immediate starter or as a capable backup.

Hurt’s Oklahoma film is full of highlight-worthy throws and rushes; it’s a vast improvement over what he put on tape at Alabama.

He runs the ball with burst and more power than you expect from a QB; he’s more Cam than Lamar in this regard. He often displays excellent vision as a ball-carrier, finding holes and setting up blocks.

As a passer, he makes a lot of nice throws, but it’s hard at times with Oklahoma QBs to sort out the player from the system; Riley’s system gets WRs separation and creates easy reads. He certainly has aspects of his passing game that will need work if he is to succeed at the next level.

For this review I pulled film from the bowl loss to LSU, easily Hurts’ worst game of the season. I wanted to see how he managed against NFL-level talent. As much as there’s rough spots, there’s certainly some moments that give me hope for his development as well.

Above, we see one of his failings. Hurts is locked on to his primary read and missed the left slot WR breaking open for what would have been an easy first down. Hurts at times is slow/unwilling to move through his progressions.

There’s more impressive carries from Hurts in other games, but even here you see what he offers as a dual-threat. He has enough speed to get to the second level before the linebackers (guys that are going to the NFL) can cut him off. He’s not afraid of contact, though his NFL coaches are probably going to want to cut back on the shoulder-dropping aggression.

This is a great example of what Hurts can do with a clean pocket- this is what he did all year for Oklahoma. This ball travels 50 yards in the air and it drops right into CeeDee Lamb’s hands on the boundary. It’s placed away from the defender and timed perfectly.

I love this play. Hurts has been getting creamed for a quarter-and-a-half at this point, but he keeps a cool head in a collapsing pocket. He evades the rusher, keeping his eyes downfield to hit his man for a 1st down on 3rd-and-13.

This highlights another of Hurts’ weaknesses, his inconsistent mechanics. He has Lamb on the quick post for a TD but he doesn’t get his feet set and misses him.

Hurts adds a dangerous wrinkle to a goal-line offense. Just as do Lamar Jackson or Taysom Hill, Hurts makes the game 11-on-11, and his vision and cutting ability are on display here as he runs this one in for OK.

Hurts certainly has traits that are going to make him desirable to NFL teams. The only question is whether NFL coaches and GMs are going to value his assets highly enough to project him as a true QB1; this might come down to the degree to which they think his mechanical and field-reading flaws are workable with the right coaching.

Even if he’s not a locked-in day-one starter, Hurts might well find himself a role as a Taysom-Hill-esque chess piece; it’s certain that, in the copycat NFL, other coaches have noticed the advantage that Sean Peyton has gained from his versatile QB2 and are coveting a mobile young passer of their own.