Joe Burrow has become the consensus top QB for the NFL. Find out how @SportsfanaticMB sees his talents translating to the NFL and for fantasy 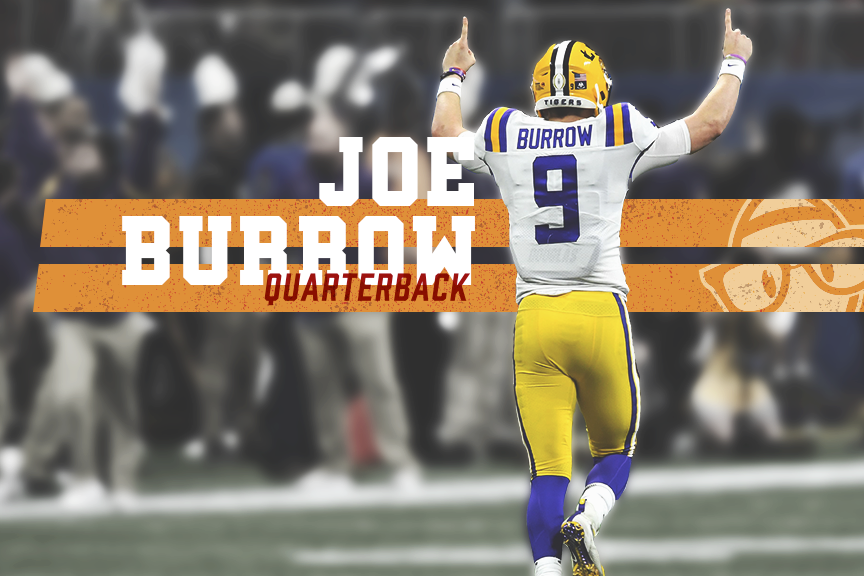 Joe Burrow is a senior quarterback out of LSU. He was a transfer from the Buckeyes, having joined Ohio State as a four-star prospect out of Athens, Ohio.

Burrow has been around football his entire life as his father played defensive back in college and the CFL before moving on to coaching. His 37 years in the business included a stint coaching Ohio State, where his son would later make his first stop as a college athlete.

Joe played basketball and football in high school. He put up over 11,000 yards passing and 157 touchdowns in his high school career and was also named an All-Star point guard in his senior year.

Burrow would not see much action in his first couple of seasons with the Buckeyes, red-shirting his freshman season and playing in a backup role to J.T. Barrett for his next two years. He played in just 10 games. While at this point Burrow seemed like the better prospect, Urban Meyer loved Barrett for his leadership and he fits the offensive scheme better than Burrow.

As the 2017 season kicked off Joe Burrow was in a camp battle with now-Washington-Redskins quarterback Dwayne Haskins. The battle was tight and looked to finally be leaning toward Burrow during Barret’s final year. However, Burrow ended up breaking his hand, resulting in surgery and his moving behind Haskins to the third option. Burrow decided to transfer out of Ohio State in hopes of earning a starting job; this would land him with coach Ed Orgeron and the LSU Tigers.

As a junior, Burrow entered the LSU offense with some hype. Many thought they had finally landed a QB who could spin it, but Burrow and the offense would struggle. Among average play and play-calling, many thought Burrow would be a bust, most dropping their draft grades on him to fifth or sixth round grades.

Burrow looking to prove everyone wrong and offensive mind Joe Brady joining the Tigers as offensive coordinator would change the fates of the entire LSU organization. Burrow was finally in an offense tailored to his skill set and he set the college game on fire, having arguably the greatest season in college history. He would become the first QB to throw for over 5,000 yards and 60 touchdowns. He brought home the Davey O’ Brien Award (best quarterback,) the Heisman (LSU’s first since 1959,) and he would bring the Tigers a National Championship (they’re first since 2007.) This success has led to him being the top quarterback in the draft.

You likely didn’t need this table to tell you, but Burrow was effective in every situation no matter where he was on the field. Stats courtesy of https://expandtheboxscore.com

These stats above were of Burrow’s regular season. I have to continue to highlight how dynamic he was and how incredible this year was for him- again, it was likely the greatest year by a college quarterback ever. Stats courtesy of https://expandtheboxscore.com.

So let’s take a look at the laundry list of Joe Burrow’s strengths.

Burrow had a much improved offensive line in 2019, yet every LSU game you turn on you’ll see this at least once. Burrow does a great job of extending plays, moving up in the pocket or around the rush while always keeping his eyes downfield. Some QBs would have just run there for an easy first down, yet, because Burrow continues to look downfield, he is able to hit Chase for an easy touchdown.

Burrow’s ball placement is elite. More times than not you’ll see him put the ball in a place that only his wide receiver can get to it. He puts good pace on the ball. More impressive is his ability to get the ball to the receiver before they leave their breaks or turn to look for the ball; anticipation throws are elite.

Burrow doesn’t always just use his legs to extend plays. While he isn’t as deadly as Jordan Love when he starts running, Burrow is deceptive and can be dangerous when he takes off.

Does Joe Burrow show any weaknesses?

Burrow has shown me two things that lack in his game. For starters, he does not have a cannon. While he can get the ball deep, he doesn’t have the velocity that others do. Burrow also tends to throw off his back foot at times. While it hasn’t cost him in college, it could be an issue in the NFL, as more experienced cornerbacks make plays on fluttering balls.

Some may question Burrow’s one year of elite production. It can’t be classified as a weakness, but it is a fair question to ask: which Joe Burrow is the real Joe Burrow? 2019 Heisman winner or the 2018 fourth-round draft grade?

The truth of Burrow is closer to the Heisman winner for me than the previous version we’ve seen. While he doesn’t have a ton of velocity on his ball, his ability to anticipate throws is just as valuable. Burrow has some of the best pocket poise in this class as well, never panicking; his calm demeanor in the pocket helped him earn the moniker “Joe Cool.”

So what does all of this mean for his NFL draft stock and fantasy?

I can’t imagine the Cincinnati Bengals don’t take Joe Burrow with the number one overall pick. If he somehow manages to fall past that he will likely be the next quarterback taken.

Fantasy-wise, Cincinnati isn’t a great landing spot for him. While they definitely will have some talent around him, the offensive line is bad. Burrow’s ability to escape the rush and extend plays should help out the wide receivers. If A.J. Green comes back that would be a boost to Burrow’s fantasy value. Until they can get him an improved offensive line and another playmaker at wide receiver, I think Burrow’s fantasy value is firmly set at the top of tier two.

That completes the Joe Burrow draft profile. Continue to check back as new profiles will be released every couple of days. If you want to check out more of my work you can follow me on twitter @SportsfanaticMB and also on my podcast Fantasy Football Roundtable, where we will be discussing all the hot off-season topics and prospects.