Joshua Kelley looks to use a strong comibine to propel him in to the NFL Draft. @Josh_FF breaks down the prospect. 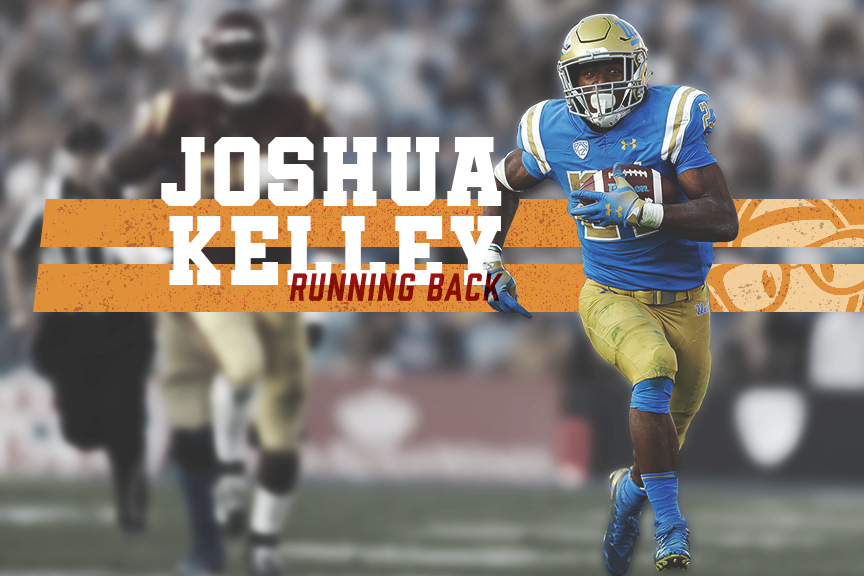 Kelley’s college expectations were limited, coming out of high school as a 2-star recruit. After two seasons as a rotational back at UC-Davis, Kelley seized an opportunity to transfer to UCLA. Kelley sat out the 17-18 season, before breaking onto the scene as for the Bears. Over two years, Kelley rushed for over 2,300 yards, with some work in the passing game as well. Kelley stayed relatively healthy at UCLA, but it’s worth noting that Kelley spent five years in college and will be entering the draft at the age of 22. He’ll be 23 in November. Kelley’s full UCLA stats are below in table format.

Kelley also impressed at the NFL Combine. His 4.49 40 was 7th among Running Backs, while he posted the best 3-Cone time of the group.  As always, it’s important to take these exercises and see if you can find them shown on the field.  When watching the UCLA tape, Kelley doesn’t show the quickness that the 3-Cone drill should reflect, nor does he show the outside speed the 40-time would indicate.

Kelley’s seasons at UCLA were nothing to scoff at.  He impressed at the senior bowl, and that’s because he has some traits that NFL Coaches will love.  Kelley shows great patience behind the line. In his senior season. You’ll see this all over his game tape, but I’ve included an example below that exemplifies his vision and patience during the regular season.

As Kelley approaches the line, he sees a gap between the tackle and the tight end open in front of him. He moves to the hole and forces the defender (#26) to commit to filling that gap on the line. Taking the rock to the outside allows him to pick up 7 yards rather than 3 or 4.  You’ll notice that he’s not going to outrun anyone to the sideline here. His game lacks acceleration and burst.

Kelley also doesn’t shy away from contact. He’s able to get low and run through a defender to fall forward. Scouts shouldn’t question his power. On his first carry of the game against Utah, Kelley is looking to set the tone against the defense.

Instead of softly stepping out of bounds, Kelley lowers his shoulder and hits the DB with the boom on the sideline. The boundary prevents him from picking up a lot of yards, but you can see his power and willingness to hit the defender rather than get hit by the defender.

While Kelley’s combine results show otherwise, his tape leaves you wishing for more explosiveness and looser hips. Below is a play that once again shows vision and patience, but it also exploits some weaknesses.

As Kelley decides to cut the ball back inside, you’d like to see him plant one foot in the grass and get upfield. Instead, it takes three steps for Kelley to make this move, and that quarter of a second is the difference for #23 to settle in and make the tackle preventing a huge gain.

Kelley’s Combine and Senior Bowl performance lock him into a job in the NFL. He’s also a well-rounded back. In his first year at UCLA, he caught 27 passes for 193 yards. Kelley is a willing pass protector, but he’s not elite at it. He only fumbled three times over 22 games at UCLA, and the defense recovered none of them. He averaged 5.1 YPC behind a middle of the pack offensive line—all these things layout to show a running back that can do everything decently in an NFL setting. The concern is that he doesn’t have one way to win. There is nothing that he is elite at, or that he can depend on every snap to beat a defender. Kelley could be a high-value handcuff for your fantasy roster. If Kelley ends up drafted in the 5th by a team like Las Vegas or Carolina, a Jacobs or McCaffrey owner could invest a 4th round dynasty pick on him.