Joe Burrow’s slot weapon has declared for the draft, and Justin Jefferson is rising into the upper echelon of WRs in this 2020 class! @DynastyJon highlights the Big Slot WR’s talents! #LSU 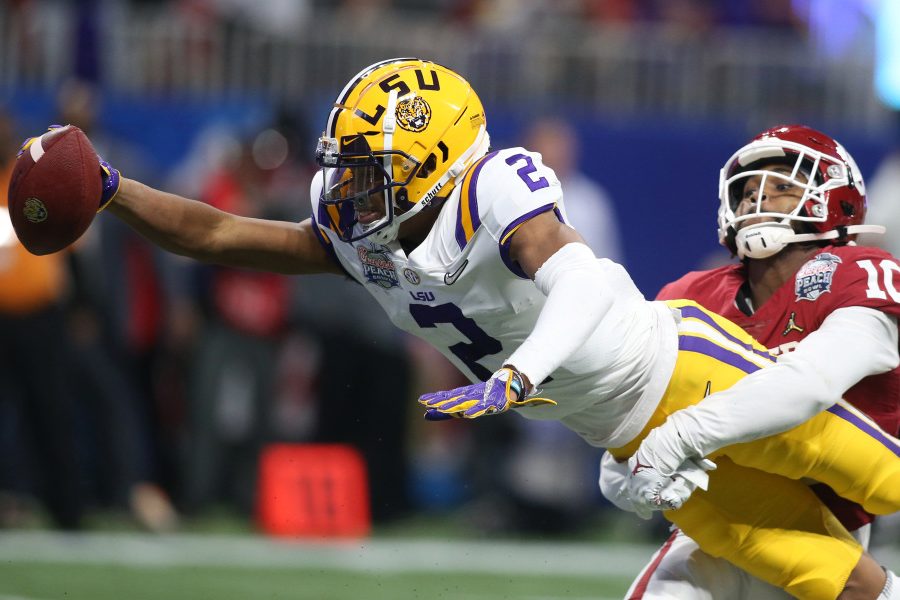 If anyone gave one iota of attention to college football in 2019, they would have undoubtedly heard about the prolific LSU offense. Projected 1st overall pick, Joe Burrow, had a historic season leading the Tigers’ offense. As a result of the record-setting production, Burrows had breakout seasons from his WRs.

Both Ja’Marr Chase and Justin Jefferson had exceptional years with mind-blowing statistics. The two WRs combined for 195 receptions, 3,320 receiving yards, and 38 receiving touchdowns. That being said, Jefferson elected to declare for the 2020 draft following his Junior season, whilst Chase will be returning for another season in Baton Rouge.

The 6’3” 192-pound wideout reeled in 111 passes for 1,540 yards and 18 TDs in 2019 on route to winning the national championship. That being said, 2019 was his first season of substantial production, and it’s yet to be seen if his success can be attributed to the talent of Joe Burrow, or if he can go on to produce without a high-end QB talent. In 2017, he was buried on the depth chart behind the likes of DJ Chark and Russel Gage, with Danny Etling at the helm. In 2018, he still led the Tigers in receiving, but with far more conservative numbers as Burrow had yet to breakout. A full breakdown of Jefferson’s college production can be seen below:

Although some may believe his statistical boom to be inflated by Burrows, I’m a big believer in the talent. Through all my tape watching thus far this year, Jefferson has to be one of the smoothest WRs I’ve seen. Jefferson is a shifty slot savant with the size and speed to play outside when needed. There have been rumors that he could even be a Day 1 selection in the draft and fit the role of a Keenan Allen/Michael Thomas in an offense.

According to PFF, in 2019 he had the most slot receptions in the nation among draft eligible WRs (109), the most 1st down receptions (72), and the most TD receptions from the slot (18).

Despite not being as supremely athletic as CeeDee, I think Jefferson is being overlooked in the dynasty community as a hardworking, high character prospect with strong hands and elegant route running.

As you can see below, Jefferson does an excellent job of creating separation with a pivot route. With a simple body fake, he can lose the covering DB and break away.

I love Jefferson’s ability and willingness to fight after the catch too. He’s agile and not afraid to lower his shoulder. That’s something we saw a perfect example of in the National Championship game against Clemson.

I feel like it’s easy to forget that he has size given the way he plays. You don’t expect players that are 6’3” to be shifty slot guys. However, with a tall body and good catch radius, Jefferson is able to attract the ball like a magnet in contested areas. He could stand to add some pounds as his frame is a little lean, but I could see him easily getting up to 200 pounds to add some strength.

I have heard some chatter that he struggles against man coverage, however, this is not something I have been able to identify at all. In fact, there are so many times where he leaves a safety spinning in circles, when in man coverage. He’s decently quick and has great agility. He’s not as fast as the likes of Will Fuller or John Ross, but with natural routes, I don’t think lacking elite speed is a big issue.

You are also unable to complain about issues with his hands and drops as he’s one of the most natural hands catchers in the draft.

All being told, I feel like Jefferson is a really strong safe prospect. I don’t think he has the upside of a Lamb or Jeudy, but he has a solid floor and will come into the league as a consistent WR2 on a team. My personal favorite landing spot would be with the Packers to offset Davante Adams. I currently have Jefferson listed as my WR4 in this class behind CeeDee, Jeudy, and Reagor. However, I’m quickly reaching a point where he could surpass Reagor in my rookie rankings.