Gage Bridgford (@GbridgfordNFL) breaks down one of the cleanest receivers in the draft class with Ohio State’s K.J. Hill. 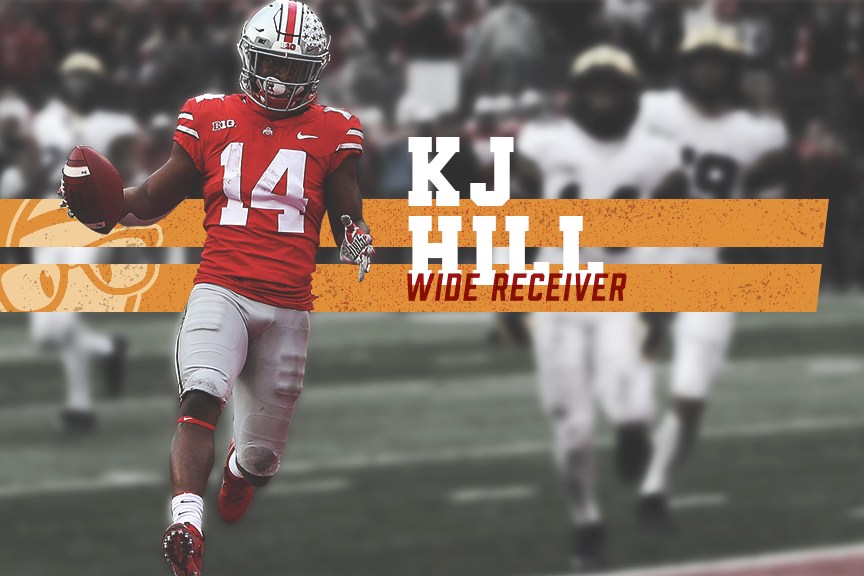 K.J. Hill redshirted his freshman season, which made sense considering Braxton Miller, Curtis Samuel and Michael Thomas were the team’s top receiving options. After that, he slowly started increasing his role over the next four years on campus. He showed his ability to contribute in multiple areas on offense along with special teams, and that’s the type of player that sticks on an NFL roster when close cuts have to be made.

He was named a captain for his final season, and for good reason. His confidence and work ethic were skills that you wanted your younger players to attempt to imitate. While he could be viewed as slightly arrogant at times, his football intelligence allowed him to garner the respect of his coaches and teammates.

Hill is leaving school with his name all over the record books despite never being the top receiving option in school. He’s in the top six in receiving yards and touchdowns, and he holds the school record for receptions with 201, which is 10 more than former NFL All-Pro David Boston.

After a quiet redshirt freshman season where he caught just 18 balls, Hill caught at least 56 balls in each of the next three seasons. He was a great example of a possession receiver with his ability to find the first down marker. His career average catch was 11.6 yards, and he did that despite not being an above-average athlete.

One surprising thing, considering he was sixth on the team’s all-time receiving list is how few big receiving games he had. He had just three games over 100 receiving yards despite playing in 50 games during his college career. Part of that goes to where he was in the pecking order among receivers and how the offense was run. It would have been a good sign to see him dominate more often, especially against weaker competition, but he seemed to rise to big occasions.

His nose for the end zone improved in each of his seasons though. After registering just 10 touchdowns through three years, he doubled that with 10 in his final season. Buffalo Bills GM Brandon Beane said back in January that the team was looking for players that could get in the end zone and be touchdown scorers. Hill was that type of guy for the Buckeyes.

Hill isn’t the fastest guy in this class, but that doesn’t mean he doesn’t have the speed to run away from defenders. He heads out on this drag route, and he just takes off once he has the ball in his hands. If he had more room to work between him and the sideline, he could have taken the ball even further.

Hill isn’t going to be close to the fastest or best route-runner in this class, but he finds ways to gain enough separation to give his quarterback the chance to make a play. The cornerback on this route is up close on a key fourth down, but he gets to the sticks and flashes open. He doesn’t do anything super flashy, but these are the little plays that make the difference in a close game.

Throughout the pre-draft process, I’ve constantly been looking to see guys that can create yards after the catch. Hill is that type of guy. Ohio State would find ways to get the ball in his hands on screens, and he was consistently getting himself to the sticks. More often than not, he was getting first downs and positive yardage. The ability to make guys miss has become a sought-after quality in modern offenses that expect their receivers to make plays on their own.

I had to put this clip in here because this is just one of the most impressive catches I’ve seen when going through the film. He’s running and spinning then grabs the ball with one hand. Hill isn’t the guy making the big jump-ball receptions or things like that, but the hand strength required to catch this ball on a line is impressive.

Hill put on a decent showing at the combine, but he’s still likely not that high on any team’s board in terms of receivers. He profiles as a guy that will need to land in the perfect situation, but, even then, he doesn’t do any one thing at an elite level that would push him into a productive fantasy situation. In a deep wide receiver class, I expect him to get drafted somewhere on Day three.