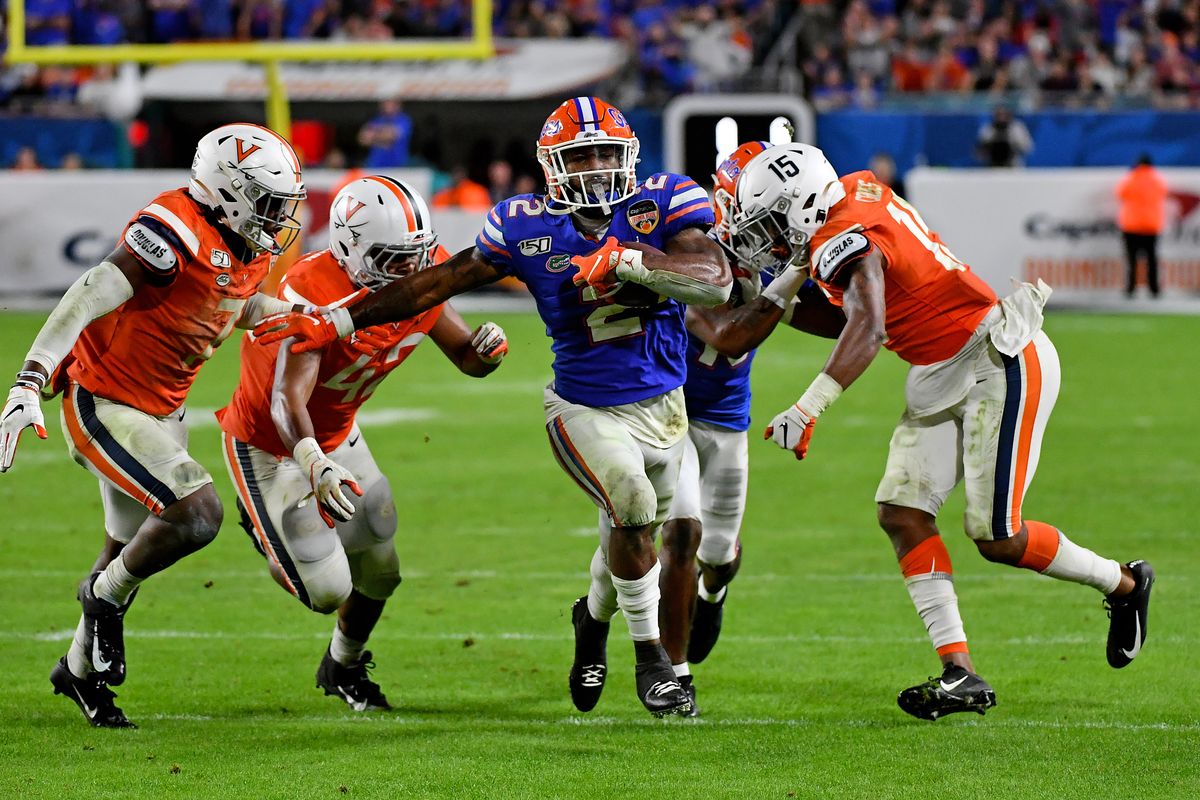 Despite a strong season with Florida, Lamical Perine is not one of the top running back prospects being talked about right now. When you ask for someone’s rankings Perine often comes in at the end of their list, maybe RB10. Perine is one of the strongest “sleepers” in this class at the running back position, and you are about to find out why.

Over four years at Florida, Perine carried the ball just under 500 times and caught 72 passes (including 40 receptions in his senior year). He averaged 5.1 yards a carry and was responsible for a TD every 15.6 touches. The numbers were good and the tape is even better.

Perine is an explosive runner and hits his holes with the pace and acceleration you look for in an NFL running back. Not only does he show good burst but also shows the top-end speed to be able to get to the second level and take it to the house. Give him some space to run and next thing you know he’s splitting a pair of linebackers and running past the safety.

The vision and patience of a successful running back also show up on the tape. He does a good job of watching the edge when running outside (ready to cut it inside the tackle if needed) and also keeps an eye on linebackers when running up the middle. Unlike a lot of players who consistently try to make plays themselves through their own creativity and athletic ability, Perine knows when to trust his blockers. He has the awareness to put his hand on the back of a blocker and ride his man for the extra yards rather than opening himself up to defenders in traffic.

Now watch how Perine sees the linebackers coming across the field and continues to work his way to the sideline while gaining yards. He looks over at his blocker (WR #10, Josh Hammond) to try to get him to pave a way forward and cut off the inside defenders. He then makes his way right behind his teammate’s outside shoulder, making full use of his teammate’s body and speed as a buffer, putting his hand on his back to make sure Hammond knows that he is still behind him.

Again watch above to see how Perine uses his blockers to create space and opportunity. When running outside he slows down to give his pulling blocker (TE #84, Kyle Pitts) time to make the block on the linebacker who was trying to set the edge. Once Pitts is able to get in front and make the block, Perine uses his burst to split the oncoming linebacker and engaged cornerback and get down the field. The ability to not only see the play develop but also influence space is an elite quality for a running back.

Perine doesn’t show the incredible lateral ability that creates “ankle-breaking” highlights but makes up for that with his vision for efficient running lanes in space.

Though Lamical Perine is a great runner his most valuable trait in the NFL may be his ability to run routes and catch the ball out of the backfield. Among RBs in the NFL Draft, Perine only was behind Clyde Edwards-Helaire and Eno Benjamin for receptions in 2019 and is atop the chart for reception TDs as well.

Not just a player who catches screens out of the backfield Perine has shown the ability to line up out wide along the line of scrimmage and be more than just a decoy. Below he runs a slant route and makes a great catch despite the throw being far behind him and his momentum. Also, we see his ability to make the hard catches with his hands, a trait highly valuable among running backs, rather than relying on his body to trap the ball.

Another important aspect of contributing to the passing game is getting open with route running. Perine understand this fully:

Perine does an incredible job of selling this route to the linebacker as a simple out route, running flat and parallel to the line of scrimmage. As soon as the linebacker is fully committed to running at him, he is able to cut up the field and gain extra speed to get wide open along the sideline with the linebacker lost in space behind him. Unfortunately, his quarterback misses him on this play. But despite this play not showing up in the box score, it shows us once again Perine’s ability to influence plays and create space in all aspects of his game.

Right now, Perine is not highly ranked on most media big boards and his name doesn’t often pop up in mock drafts (fantasy or not). But with every chance he’s gotten to show up, he hasn’t yet disappointed. In the 2019 Orange Bowl vs Virginia, Perine ran for 138 yards and 2 TDs on 13 carries while adding 5 receptions for 43 yards and another TD. During the Reese’s 2019 Senior Bowl (which was played at his former high school’s stadium) he first won the RB of the Practice Week for the South team and then the Player of the Game Award for the South with 7 carries for 42 yards and 2 receptions for 17 yards and a score during the actual game. The combine is up next…

Come April, Perine likely won’t find his name as one of the first called for the running back position. He is set to have a contributing role on whatever team drafts him. At a minimum, I would expect Perine to immediately step in as a weapon on passing downs. If drafted with the chance at a starting role, I would envision him being able to take advantage of such an opportunity. Currently, I see Lamical Perine as a solid second-round pick in most rookie mock drafts. Depending on landing spots he could be ranked anywhere between RB5 and RB10. The talent is there and I would be more than happy to use my second-rounder to take a chance on his talent.