Senior sensation Michael Pittman Jr. a WR to watch. How good does @SportsfanaticMB think he can be in the NFL? 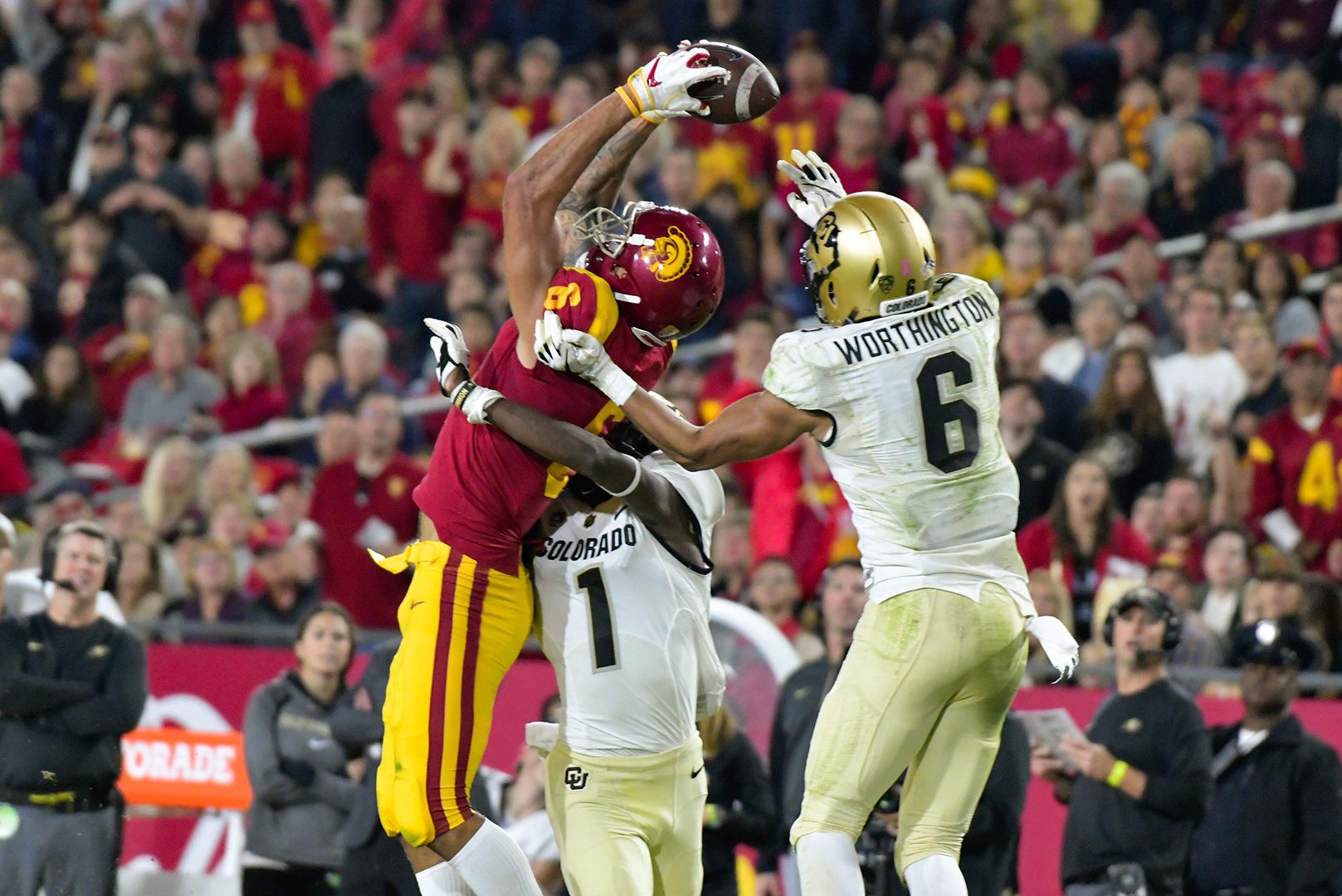 Pittman was not predominantly featured in the offense in his first two years of the season. His freshman year he did have to compete with the likes of JuJu Smith-Schuster and Deontay Burnnett. However, in his sophomore season, he was able to move up to third on the depth chart. While he was able to make some plays no one expected he would take the astronomical leap he would take the next two years.

In his junior season while his overall stats aren’t impressive what he did was. Pittman was able to pick up over 200 yards after the catch, while adding three games with over 100 receiving yards, and just one dropped pass on the year. This increase in role and production would lead to his breakout senior season.

His senior season started per usual with three good games. However, his fourth game came and Pittman put himself on everyone’s radar with a massive game. 10 catches- for- 232 yards and one touchdown. Pittman would continue to breakout putting up five games with over 100 yards. For two years fellow wideout Tyler Vaughn looked like the wide receiver to watch on this offense, but Pittman’s senior season quickly changed that. Finishing a historic senior season for the Trojans he finished as the All-PAC-12 wideout and as a finalist for the Biletnikoff Award (best WR in College.) After a senior year breakout, Pittman moved into the discussion for the top 10 wideouts in his draft.

As you can see from this table that Pittman had a great senior season. You can also see from the table above that Pittman spent most of his time playing outside compared to in the slot. He will likely be on the outside in his NFL career. Pittman proved he had solid hands and could be a viable deep threat.

In this table, you can see how good his hands are. Pittman dropped a total of five passes out of 176 catches in his college career. He can force missed tackles when needed.

all advanced stats courtesy of https://www.pff.com/

In Pittman’s big play % he took 17 plays over 20 yards, seven of which resulted in touchdowns. Pittman dominated in his senior year he finished as the best player on their team in multiple categories as seen in the table above.

all usage stats courtesy of https://expandtheboxscore.com/

Pittman is consistently strong at the catch point. He does it beautifully here. Attacking the ball at the high point and even keeps the ball away from the defenders. As mentioned earlier in the article, Pittman’s hands are ridiculously good just five dropped passes out of 176 catches.

Pittman’s catch radius is one of the best in this draft class. He can jump, stretch, and twerk his body in many different ways to make the catch.

Pittman shows off great body control in every game. He didn’t always have the best QB’s throwing to him. He consistently made adjustments to the ball. Even more impressive when he had defenders all around him.

Michael Pittman Jr. has a couple of weaknesses that have stood out on the tape for me. For starters, he is not very elusive after the catch. While he may make “a” player miss here or there he tends to be brought down fairly easily, just a total of 20 broken tackles after his 171 catches. While he has shown some decent speed for a player his size he is not a “burner” and usually doesn’t blow past defenders. While this is not a weakness it will be something many will question during the draft process, why didn’t he break out until his senior season. Could it have been because he was in a high volume passing offense?

With a great senior season and an impressive showing at the Senior Bowl, Pittman has worked his way into many analyst’s top 10 WR rank. Pittman has some of the best hands in this class, his ability to control his body and come down with contested catches is an elite trait. He can physically dominate cornerbacks at the catch point and rarely drops passes. So where does this leave Pittman for fantasy and the NFL draft?

The talent pool for wideouts in 2020 is deep. However, I do think Pittman sits in the second tier of wide receivers. Pittman, I think likely goes on day two or somewhere within the 2nd and 3rd round. Some of the teams I think could be in play for him there Packers, Giants, Redskins, Cowboys, Dolphins, Eagles, and the Saints. If he lands on any of those teams outside of the Dolphins I think he could be a great fit. He can stretch the field when needed but will mostly be a possession receiver and red-zone threat.

For fantasy, I think he has shown solid WR2 upside. If he lands with the Packers, Saints, or Cowboys I could see him creeping into the WR1 territory in seasons when he puts up a ton of touchdowns.

That completes the Michael Pittman Jr. draft profile. Continue to check back as new profiles will be released every couple of days. If you want to see more of my work you can follow me on twitter @SportsfanaticMB and also on my podcast Fantasy Football Roundtable, where we will be discussing all the hot off-season topics and prospects.