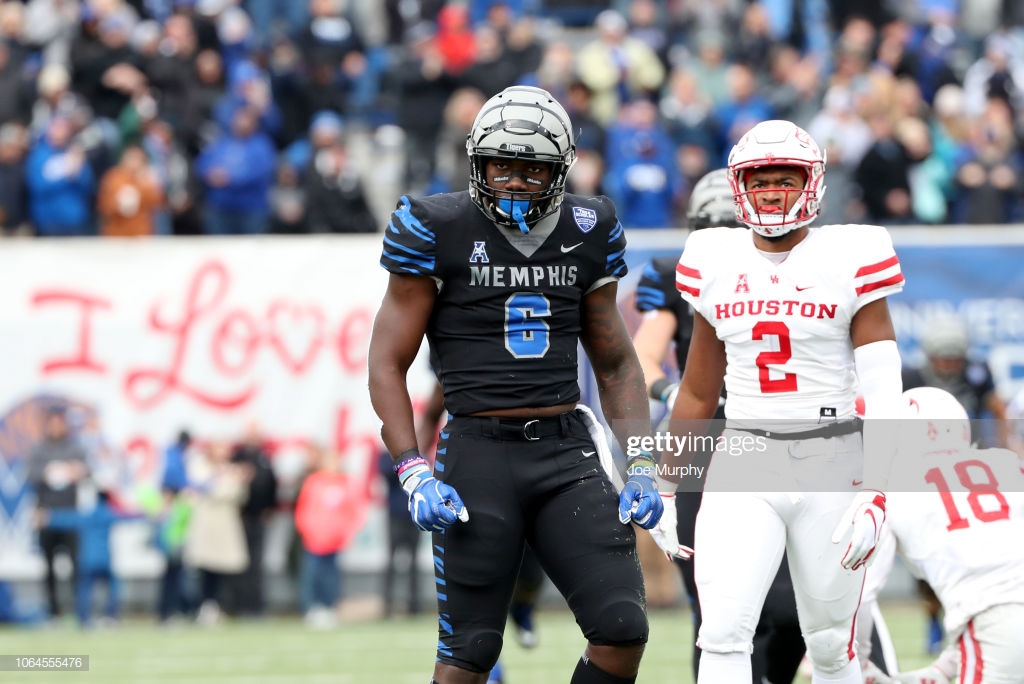 Patrick Taylor Jr. had an opportunity at the end of the 2018 season to leave the Memphis Tigers and enter the NFL Draft.  After receiving the same draft grade as fellow Tiger, Tony Pollard, Taylor had to make a choice.  With his backfield mates Darrell Henderson and Tony Pollard both electing to forego their Senior seasons, Taylor decided to return to Memphis for one last run. Although he was hoping to improve his draft stock, Taylor’s 2019 season was shortened by an undisclosed foot injury suffered against Ole Miss in week 1.  After missing eight games, Taylor returned, but didn’t live up to his expectations for 2019.

Measure Up (NFL Combine)
As always, the Dynasty Nerds will pound the table for the film. Raw numbers don’t reflect the full story, but athletic testing will still be observed.

Before we dive into the good stuff, we’ll look at his stats. In his Junior season, Taylor accumulated 1,122 yards on 208 carries, as well as 197 receiving yards. Between the rushes and receptions, Taylor had 18 Touchdowns from Scrimmage in 2018.  In his six games in 2019, Taylor had only 402 yards from scrimmage with 78 carries and 8 receptions. He rushed for 5 touchdowns.

2018 was undoubtedly the better season for Taylor, but his performance was still lacking in comparison to fellow Memphis back Darrell Henderson. Henderson had 6 more carries, 787 more yards, and scored 6 more Touchdowns than Taylor in the same season.

Tape is the easiest way for a running back to show off his strengths.  As you watch Taylor, you’ll notice a few things that should give him a shot to make an NFL Roster.

In the clip below, you’ll see Taylor lineup out wide.  This generally allows the viewer to get comfortable with a back’s ability to run routes and catch the football.  From the right slot, Taylor runs across the middle of the field, catches the ball at helmet level, and secures it before taking a hit from the Ole Miss safety.

We don’t see Taylor do this a lot, but he flashes some receiving talent.  He usually lines up in the backfield, but he comes off as a capable pass catcher when he’s targeted. The issue tends to be after the catch, which you’ll see further down in the article.

I want to show Taylor’s best play of the game by far, and the best I saw him make in my film study.  While you’re watching, look at the vision demonstrated by Taylor, the decent cut behind his line, and the awareness to get to the marker on 3 & 11. We’ll see it from 2 angles.

Taylor’s met three yards shy of the marker by a defensive back. He lowers his shoulder, not once but twice, showing not only some power but also great energy. He fights for the first down here and keeps the drive alive for the Tigers. While this play looks nice, it’s an outlier for Taylor. You won’t see much of this in the film.

Taylor’s certainly not a glamorous back, but I’ll show you why that can be a positive for NFL teams. You’re going to see three consecutive run plays called by Memphis. Taylor doesn’t touch the ball on any of these plays but keep your eye on him.

In the first play, Taylor throws a block to create a seam for Antonio Gibson (#14) to burst through. On the second, Taylor runs right at the defensive end on the backside of the play. It’s not a great block, but he gets low and gives him a shot. On the last play, Taylor takes that same defensive end, and pushes him out towards the side line. None of these blocks are great run blocks, but it shows his willingness to play for someone else. No this doesn’t show any prowess as a lead running back, but an NFL team could view that as something valuable on special teams.

While the tape can show the good plays, it can also expose a running back’s weaknesses. Taylor just doesn’t have the on-field burst or explosion you want out of a lead back. Time after time, you hope to see Taylor hit a hole and come out the other side with speed. On the play below, you’ll see Taylor pick up a chunk of about 11 yards on a long 3rd down.

Taylor gets the ball, moves through the hole but then slows down instead of continuing his burst on the other side. He’s met 1 on 1 by a defensive back and he’s brought down. In the games I watched, Taylor didn’t win a single 1 on 1 matchup with a defender. You’d hope he’d make a move to beat this guy and give himself a chance at the first down.

Another major weakness of Taylor is his inability to maintain speed while making a move. Watch as Taylor takes a pass out of the backfield and decides to cut back at the hash as his blocker picks up the DB.

From the moment Taylor makes that decision at his own 6, to the time he passes the blocker, number 38 has closed 3 or 4 yards of separation. Once again, you’ll see a lack of explosion from Taylor after the move as he’s brought down by the defense.

Patrick Taylor Jr. isn’t going to blow anyone away. He’s not a phenomenal route runner, but he’s a capable pass catcher. He doesn’t have the burst or acceleration you want from a lead back and loses speed with every decision he makes. Worst of all, it doesn’t seem like he can beat defenders in the open field.  To keep things simple: Patrick Taylor is a special teams player in the NFL and might not even get drafted. If he somehow gets lucky enough to get on the field with the offense, he won’t impress anyone. He won’t be drafted in most rookie drafts, and even if he ends up in a spot like Kansas City, I don’t think he belongs on your dynasty roster.