Gage Bridgford (@GbridgfordNFL) takes a look at one of the best jump-ball receivers in this class with Clemson’s Tee Higgins. 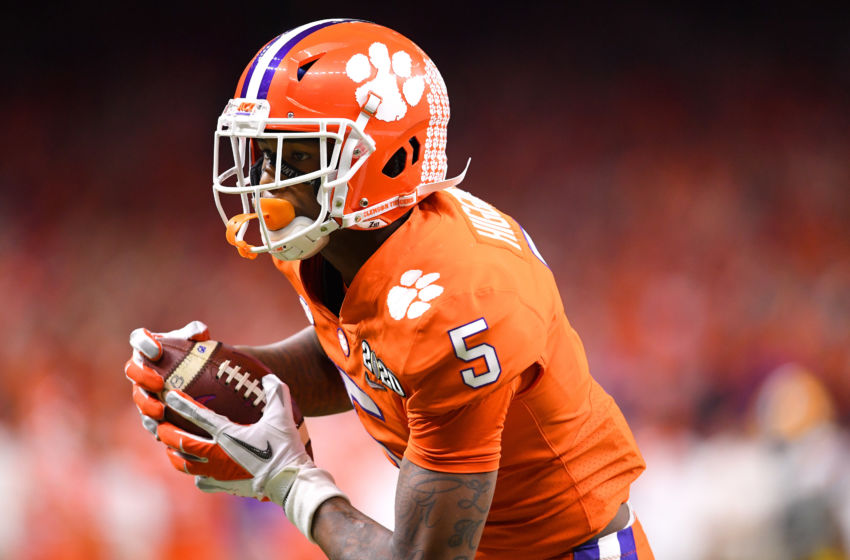 Clemson wide receiver Tee Higgins has been hovering around the top five wide receivers in this draft class since the 2018-19 season ended. His size has been a coveted feature thanks in large part to the prowess that he’s shown down in the red zone. He was named as a first-team All-ACC selection after his junior season, and he showed that the big game is not too big for him after lighting up the board against Virginia.

After choosing to sit out of the combine’s athletic testing, his pro day coming up at the end of this week got a whole lot more important. The largest knock on Higgins has been his lack of top speed and explosiveness, and, if he tests poorly, we could see his stock continue to slide. However, it won’t be from a lack of work that he accomplished in school.

Higgins is leaving Clemson tied for the school record in receiving touchdowns with 27 despite 70 fewer receptions than either of the two guys, DeAndre Hopkins and Sammy Watkins, he’s tied with. His size allowed him to bully the defenders he matched up with, and he was a force in the red zone. I’m expecting him to run a 40-yard dash in the 4.56-4.60 range which is perfectly fine thanks to his athleticism in the end zone where he excels.

Despite not having elite top-end speed, he was still a big-play threat because he was so effective in jump-ball situations. He averaged 18.1 yards per catch throughout his college career, and that number likely would have been higher if it weren’t for a down year during the sophomore season that saw him average just 15.9 yards per catch.

The one area that Higgins lacks most is in short areas. If a team asks him to be a speedy receiver across the middle, that’s just not what his game is based on, and he won’t be successful. He doesn’t have the speed to outrun corners underneath, and, as long as an NFL offense doesn’t make him do that, he shouldn’t struggle to be successful.

If someone asks you how Higgins is going to win at the next level, just show them this clip. This is what he does best, and it’s the perfect example that you can’t teach size. He gets in behind the corner, and Trevor Lawrence puts the ball up where only his guy can go get it. While Higgins doesn’t possess elite athleticism, his size makes him a great threat in the red zone.

Higgins doesn’t have great burst, but he shows off a fair bit of giddy up on this play. He also shows good balance up the sideline to keep himself inbounds on the way to the end zone. The narrative that a player can have a nose for the end zone is accurate when it comes to Higgins. The guy always finds a way to score, and it was a pleasant surprise to see him click and go up the sideline after he secures the catch.

The greatest strength Higgins has is his size. In this video he flexes all of his might on the defensive backs by running through each of them to turn this short catch into a big gain. Typically most yards after catch guys are shorter and quicker, but Higgins earns those extra yards by running over you. Similar to a bigger running back, like Derrick Henry, you’re going to dislike tackling this guy when the fourth quarter hits in mid-December up North.

Higgins didn’t face press coverage a ton in college which was for the best, considering how he handled it when facing an elite cornerback like Jeffrey Okudah. However, there were occasions when he used some subtleness to get behind the corner, and you’re just not going to beat him in a jump-ball scenario. It’s not going to happen. Here he is high-pointing the football, and you’re just there to watch.

While Higgins has fallen out of favor at the top of the draft class after passing up athletic testing at the combine. A move that did not help his stock, he still can lean on the production he showed in college combined with his size. Although I think he comes off the board somewhere on Day 2, and, depending on how the NFL values him among the rest of the receiver class, he could be a second-round pick, but that’s not a lock. Higgins is safe and scary for a couple of reasons. Given the right landing spot, he can be a stud. Try to get him to do something he’s not good at, and he could bust in a hurry.