Gage Bridgford (@GbridgfordNFL) looks at one of the rising wide receivers in this year’s draft in Oklahoma State’s Tylan Wallace. 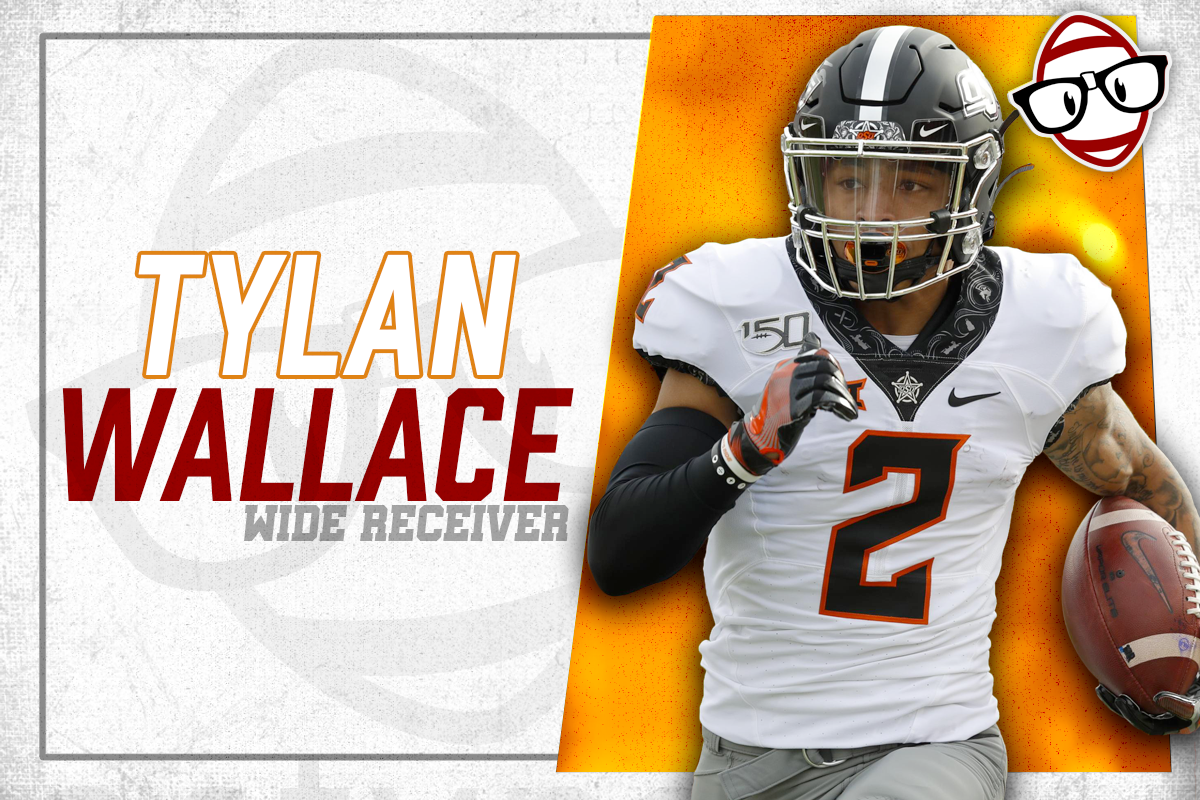 Quietly recruited out of high school, Oklahoma St. wide receiver Tylan Wallace waited just one season before he started putting the rest of the country on notice. His track background helped him become a human highlight reel waiting to happen once he had been put into the regular starting lineup.

Wallace was a star track athlete in high school, specifically in the triple and long jumps. In his senior season of high school, he finished second in the triple jump to Jalen Seals, who has been an All-Big 12 competitor for the last three years. He finished eighth in the long jump in that season as well. It’s unfortunate he won’t get to test his jumps at the combine because he likely would have been one of the top performers of all combine attendees.

Since he’s arrived on campus, his coaches have frequently praised his work ethic. He bounced back well from a torn ACL that cut his 2019 season short. He was on pace to put up 86 receptions for 1467 yards and 14 touchdowns, and he likely would have been one of the top wide receiver picks in last year’s draft. Now that he’s fully healthy, he’s going to challenge again to be in the top five of this year’s wide receivers.

After a quiet rookie season that saw him put up just seven receptions for 118 yards, he burst on the scene as a sophomore. He had 86 receptions for 1491 yards and 12 touchdowns. That sophomore year is the type of season could have pushed him into the top part of a relatively weak 2019 NFL draft for wide receivers. If he were able to enter the draft after just two years, he likely would have gone in two years ago.

Following that sophomore season, he was looking to put up an even better. If it weren’t for a torn ACL that cut his season short, he would have put up nearly identical numbers. He was on pace for 86 receptions, 1467 receiving yards and 13 receiving touchdowns. His ACL injury is the only reason that he didn’t enter the NFL off of back-to-back 1400 yard seasons. However, looking at the previous class compared to this one, it was likely in his best interest.

The top of this draft class has a few solid options, but it gets murky after that. Wallace’s red-zone and leaping abilities made up for any lack of speed that he has. He averaged 16.8 yards per reception in his career, and he has the skills to go be a consistent wideout at the next level. Whatever team ends up drafting him is going to be getting a jump-ball threat with good route-running skills underneath.

This play is just another example of Wallace’s work at the catch point. He can win a jump ball, or he can occasionally run by you. On this one, he doesn’t do either of those. He just adjusts to the ball better than just about anyone else is going to do. While at Oklahoma St., he wasn’t always playing with great quarterback play, and he developed his ability to catch off-target passes with ease.

Wallace isn’t really a speed guy, but that doesn’t mean he can’t turn on the jets every now and again. He gets room off the line of scrimmage to get his strides going. Then he just sprints right past the defender. If the quarterback lays the ball out in front of him a little more, he’s going to sprint into the endzone for an easy score. He’s not a burner, but he still has some wheels.

Down the field, Wallace isn’t always going to generate a ton of separation, but he knows how to make room to work on underneath routes. On this play, he sees that the corner is worried about getting beat deep, and he takes advantage of that. He knows where the sticks are, and he snaps off his route there for an easy first down. Every time a team plays him softly, he’s going to win with this route.

Any time there is a jump ball, Wallace is convinced that it is his ball to lose. It doesn’t matter what position he’s in or what defender he’s matched up with. When the ball goes up, he’s going to do everything he can to bring it down. On this play, he’s matched up with a veteran corner from Tulsa that he’s been battling with all game. It doesn’t matter because Wallace goes and snatches the ball away. It’s a great skill for a wide receiver that doesn’t always generate a ton of space to have.

In a deep receiver class, Wallace really boosted his stock with a strong showing at the Senior Bowl. If it weren’t for a torn ACL in the 2019 season, he likely would have been picked on the second day of the draft with the season that he was putting up. He bounced back in his final season on campus. Wallace has a chance to fight to be one of the top five or six receivers taken in the draft after the consensus top group. He will need to run well at his pro day to really boost his draft stock. If he can run faster than 4.60 combined with his solid jumping skills, he’ll likely be drafted on day two.