Gage Bridgford (@GBridgfordNFL) breaks down one of the most fundamental running backs in the upcoming draft class. 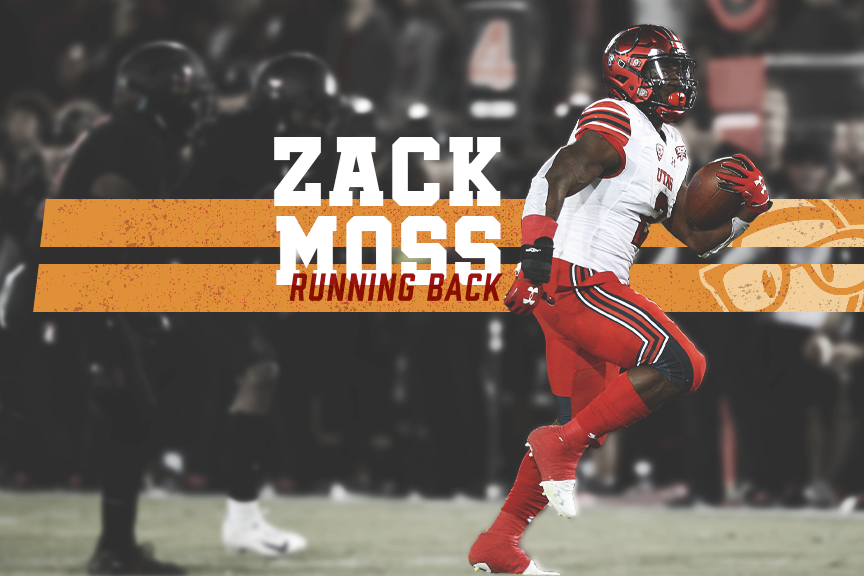 Zack Moss is a Senior running back out of the University of Utah that went back to school for his final season to round himself into form along with putting together a full year following an injury-shortened Junior season. A 3-star prospect coming out of high school, Moss put together four solid years in school, and he improved every year which is what you’re hoping to see rather than players with one year of statistical explosion before trending downward.

In addition to improving himself on the field, he became the first member of his family to graduate from college when he finished school with a degree in communications in December. He was a leader throughout college, and he’s going to nail the interview portion of the pre-draft process leading up to the draft.

Moss is the type of character-player that you’re hoping to get when someone goes back to school for the fourth year because we’ve seen players in years past, such as Chauncey Gardner-Johnson and Jachai Polite last year, struggle during the interviews and kill their draft stock. Moss isn’t just a great person off of the field, but he has been extremely productive on it for the Utes.

In 35 games at Utah, excluding the 10 where he split carries as a Freshman, he went for over 100 rushing yards in 19 games, including eight that were 150 or more yards. His yards per touch went up every season, and he also drastically improved his nose for the end zone with 29 touchdowns in 22 games over his final two seasons.

He’s leaving school as their all-time leader in rushing yards, yards from scrimmage and touchdowns. He also leads the school in touches all-time by nearly 100 more than the next guy on the list. He’s got a fair bit of work under his belt, and he’s fifth among running backs from this year’s draft class. A hefty college workload can tell you a few things. One of them is the consistency of the player, and the other is how many miles they have compared to some of the younger guys from their class.

Moss wasn’t carrying a load like AJ Dillon of Boston College or Jonathan Taylor of Wisconsin who are both in the top 118 all-time in touches from scrimmage. Still, that volume of touches is something that you have to monitor when scouting him just like NFL teams are going to do this offseason.

After registering just one reception during his Freshman season, he developed into a quality pass-catcher out of the backfield during his final three seasons, although that Junior year was oddly low compared to his Sophomore and Senior seasons. While some of the other running backs in this class had passing plays designed for them, Moss was not one of them. Most of his receptions came on dump-offs out of the backfield.

If you turn on any bit of game film from Moss’s time in college, you’re going to see him try to cut back when the initial lane is blocked up. At times, that could get him in trouble when he would get caught behind the line of scrimmage, but the majority of the time he was able to reverse field and get around the defense.

After you see Moss cut across the field when he should have been tackled for a five-yard loss, he’ll showcase his excellent contact balance on the next play. On this play, he should have been tackled for a near-safety, but he was able to stay on his feet and turn it into a positive play for the offense, and there are a number of plays throughout his tape that shows how hard he was to bring down on first contact.

Moss runs hard which matches up perfectly with his size, and he doesn’t shy away from contact in the middle of the field or on the sideline. He finishes his runs with power, and he isn’t afraid to lower the shoulder to gain that extra yard or two.

Looking at Moss, he’s a sound player with good fundamentals, and he’s going to be a quality pro at the next level. However, he doesn’t bring much to the table that separates from other rookie options in the class. It’s unlikely that he gets drafted to be a team’s workhorse back, and that’s likely the only way that he has fantasy relevance early in his career.