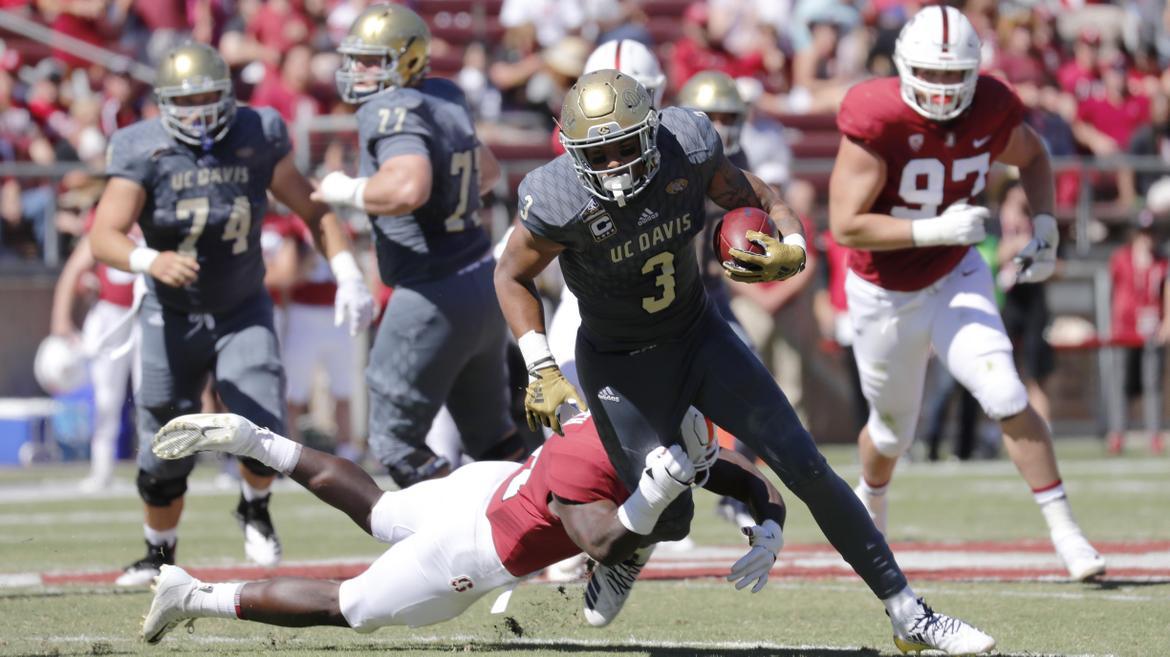 It’s no secret that this 2019 draft class has taken more heat than Nevada in the summer, but when you really dig in, you start to see just how many late-round gems this class may actually end up producing. I’m not telling you anything new when I say this wide receiver class is deep…but this wide receiver class is really deep! As you roll into the fourth round of your rookie drafts, you want to grab a player that has talent, proven production, measurables and of course a path to playing time. While I cannot help you with the latter, Keelan Doss, WR UC Davis, checks all the boxes for the former traits.

Small school prospects all come with inherent risks, but when you have a prospect as productive as Doss, who possess qualities that will undoubtedly translate to the next level, that’s a prospect you cannot ignore. Now, let’s dive into some of the video game numbers he produced.

Stats don’t always tell the entire picture, but in this case, it’s hard to look at the numbers Doss produced and not marvel at his production. He led FCS in receptions in back-to-back years. He finished second in receiving yards in 2017 and fourth in 2018. Both seasons he was named to the AP All-American team and in 2016 he was named to the Sophomore All-American team. For the majority of his career, Doss was the best player on the field… He commanded the attention of opposing defenses and did not back down even against FBS competition. When he faced off against Stanford, he turned 13 receptions into 106 yards. Against San Jose State and Idaho, he had 11 receptions for 85 yards and 4 for 32 and 1 touchdown.

Doss saw a staggering 165 targets (28.2% team target share) during his final season, averaging 9.1 receptions and 102.6 receiving yards per game. Even more impressive he caught 72% of those 165 passes, talk about efficient. The next closest receiver on the team had 62 receptions for 896 yards. Doss was clearly the man on that offense. Despite being the number one target opposing teams looked to take away, he was able to thrive vs double and sometimes triple coverage which shows up on the film. He accounted for 31.2% of his team’s reception totals and 31.8% of its yardage totals. His 52nd percentile breakout age tells us he’s much more than an older player dominating the younger competition. He produced as a part-time player as a true freshman

When you watch his film, it’s clear that he has the talent and skill set to contribute at the next level. Watching how he gets open, works his way back to the football and how he competes, he will make whichever team he lands on very happy. He’s a quarterback friendly wide out. His route running is refined and his body control and awareness jump off the screen.

Doss was able to capitalize on his opportunity to impress NFL scouts by competing against tougher competition at the Senior Bowl; and he did not disappoint. He had a solid week of practice showing that he had not only the skill but competitiveness to play against much better competition. From the practice clips you can see his route-running ability shine. The best part of his week was that everything that was seen during the practices translated to the field on game day. Doss finished second on his team in yards with 55, behind Andy Isabella’s 74 and tied 3 others with 4 receptions for the north squad.

Doss is a talented receiver. You can tell that he has worked hard to establish himself as a complete wide out. He does not have the type deep speed that players such as DK Metcalf or Marquise Brown have. He wins with technique, body control and route running. He improved on his numbers each season in college, which shows that he is more than capable of continuing his growth moving forward.

Standing 6’2 211lbs, Doss has upper percentile height and weight for the position. His 77-inch wingspan is also impressive, but his lack of strength is concerning. He did not perform any of the on-field testing at the NFL combine but did hold his pro day on April 5th. There is limited information on what he did and did not do, but it was reported that he ran a 4.45 in the 40-yard dash. Even if you adjust that time by .05, a time of 4.5 should still be seen as a huge win for him; given the fact that he does not look that fast on film. He only benched 6 reps of 225, which is surprising given his size. He’ll need to get stronger moving forward. I wouldn’t consider Doss a black-box prospect because of his massive college production and a reported 40 time, but there are concerns about his short area quickness and strength.

Looking at Dynasty Nerds Rookie Rankings, Doss is not currently in the top-77 rookies; but that’s ok! This just means you probably won’t have to spend any draft capital on him. Even after a reported strong pro day, combined with a very strong showing at the Senior Bowl, the buzz surrounding him in dynasty circles isn’t catching up as quickly. Doss is almost a lock to be drafted at worst on day three. Given the lack of hype post pro day, even when his name is called most won’t even notice. As a savvy dynasty owner, you will notice and be better prepared to acquire him for pennies on the dollar when that happens.

The only thing that should truly concern you about Doss is the level of competition he faced; even so, he performed well enough at the senior bowl to ease some of those concerns.  He is a refined route runner with ideal size and better than average speed. He catches the ball well and does a fantastic job making himself available to the quarterback. I don’t think it will take him long to acclimate to the NFL game given his production in college. He should stand out from rookie minicamp, up until training camps open. I don’t know if he will ever have the same ceiling that DK Metcalf or Marquise Brown has, but I am confident that he has and will continue to have a safer floor if he can earn a spot in a lineup. Doss should be a priority waiver add at the least, stash him away on your taxi squad with confidence.