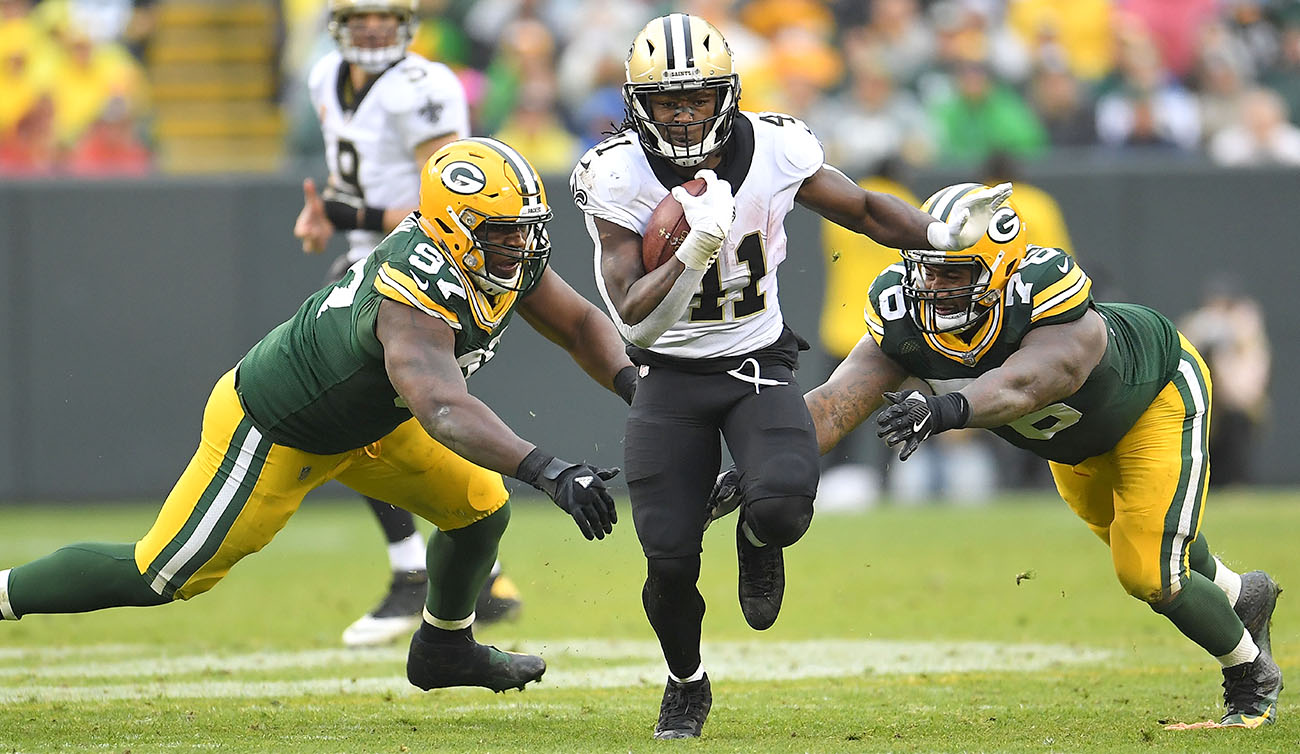 We all want a bell cow back to be the centerpiece of our fantasy team, heck NFL teams want a bell cow back to be the center of their NFL team, but, there are only so many Todd Gurley, Zeke Elliott, David Johnson or Lev Bell’s to go around. That is why there is such a high premium placed on those running backs who can put up 18 to 25 points on a weekly basis. There is nothing quite as frustrating as the running back by committee that teams such as the New England Patriots, Detroit Lions or Philadelphia Eagles employ. On any given week one of three or even four running backs might put up 12 to 20 fantasy points, can you guess which one it will be is the question. That can be so frustrating.

The New Orleans Saints have two really good backs in Mark Ingram and Alvin Kamara. Ingram is suspended for the first four games of the 2018 season but don’t let that scare you off. Ingram has averaged 4.5 yards per carry for his career and last year scored 12 rushing touchdowns and caught 58 passes, and that was with Alvin Kamara bursting on the scene. Current FantasyPros.com ADP has Ingram going off the board as RB 19 (30th overall). While I don’t expect Ingram to match last years RB6 finish, I do expect Ingram to slide back into his role in the Saints offense after he returns from his suspension and I project him to finish in the RB 12-20 range. This brings us to Alvin Kamara, last year’s RB3 in ppr who burst on the scene with 6.1 ypc and 81 receptions. Currently coming off the board at RB 5 (6th overall) Only ten wide receivers caught more passes last year than Kamara. With good size, he has the ability to run inside but really excels in when you get him in space. Last year New Orleans attempted the fewest passes since 2009, but I expect the passing game to return to the norm in 2018 which should open up opportunity for Kamara in the Saints high powered offense. It is a longshot for Kamara to repeat his top 3 finish, he should, however, finish comfortably in the top ten.

The Atlanta Falcons might have the original new era Dynamic Duo in Devonta Freeman and Tevin Coleman. With his compact, stout build Freeman has grabbed ahold of the job and shows no signs of letting it go. Freeman came in at RB 14 in ppr scoring on MFL for 2017, a season in which he missed two games. Since becoming the starter in 2015 Freeman has averaged almost 4.4 yards per carry and four receptions per game. Consistency like that keeps him in the top fifteen running back conversations with top ten upside and with a current ADP of RB 11 (19th overall), he can still provide some value. The other half of this dynamic duo is Tevin Coleman, sliding in at RB 28 (68th overall). Coming into the NFL a year after Freeman, Coleman is the bigger of the two back and plays the change of pace/third down role. Finishing at RB 22 in 2017 Coleman is looking to build on that foundation as he is heading into free agency after the 2018 season, he is likely heading into a big payday if he continues to put up numbers like the past couple of years. Tevin Coleman excels in all three phases of the game, running/catching/blocking and has a nose for the end zone with 20 touchdowns in 3 seasons. I would not be surprised to see him outperform his current ADP by 8-10 spots.

My last dynamic duo comes courtesy of the Carolina Panthers in the form of second-year back Christian McCaffrey and free agent veteran CJ Anderson. McCaffery checked in at RB 11 last year on the strength of his receiving game and his current RB 12 (19th overall) still supports that ranking. A heralded pass catcher coming out of college with 99 college receptions in three collegiate seasons McCaffrey carried that prowess into the NFL with 80 receptions as a rookie. What did not carry over though was the impressive rushing yardage that McCaffrey was able to pile up against Pac 12 competition. Carolina gave Jonathan Stewart, who was not resigned as a free agent, 198 very inefficient (3.4 ypc) carries in 2017. The Panthers look like they intend to keep McCaffrey’s role the same in 2018 with the addition of the other half of the dynamic duo, free agent signing CJ Anderson. Anderson, currently RB 41 (105th overall) piled up 245 carries for 1007 yards, 4.1 ypc and 28 receptions last year in Denver. The up coming season should provide Anderson with 190 – 210 carries as the ground and pound back for the Panthers with both backs on the field at the same time. Anderson finished as RB 19 last year. His situation has stayed steady even if his location did not. Being picked at the end of the eighth round Anderson is in a great position to outperform his current ADP.

There are three pairs of running backs that can be counted on in 2018 to deliver fantasy results even though they are sharing the workload. Smart owners will not shy away from double dipping into these backfields to build their rosters. Let me know what you think. Are you buying into any tandem backfields?  If so, who? Talk to you soon.