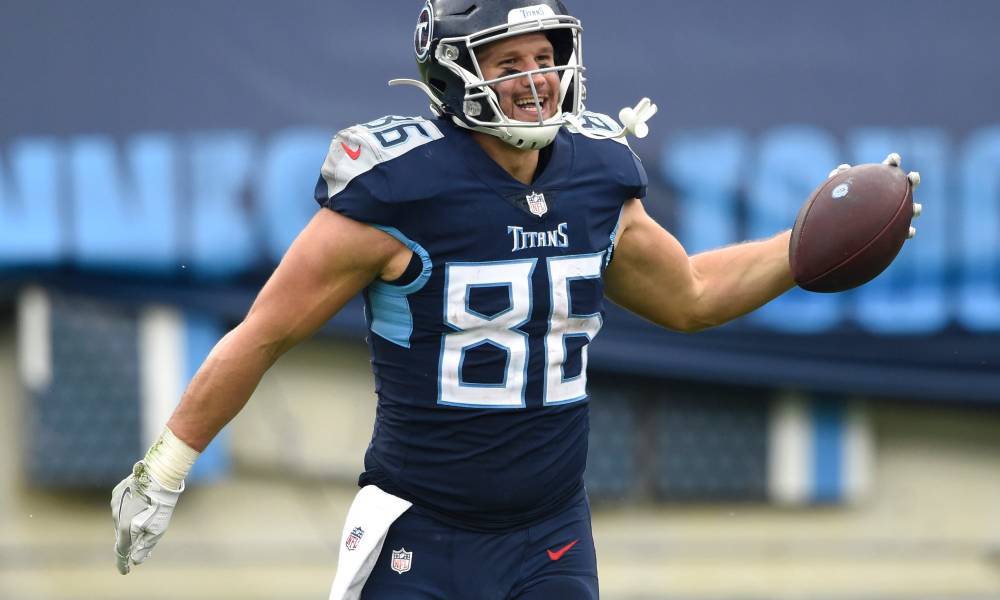 It’s Fantasy Football season once more! Though, if you’re in dynasty leagues, then it’s year-round for you. For example, right now, you’re trying to make trades/waiver claims and get your team ready for the season. This is the prime trading season to get guys you’re high on for a lower price!

So, what guys should you acquire? And for how much? Who should you sell or hold? Well, I’m here to help you with that issue. This is the third article in a series of articles that will cover all 32 teams in the NFL.

I’ll recommend one main breakout player from each division, along with a player to get from every team. I’ll explain why I chose them, offer my predictions, and discuss what I’d trade them for. This is applicable for any league as well since I’ll be potentially including IDP players too. Let’s look at the AFC South:

The Titans lost their number one TE, Jonnu Smith, to the Patriots in free agency during the off-season. They didn’t replace him either in free agency. Instead, they are promoting Anthony Firkser to the lead role. Firkser has been with the Titans since 2018, serving in a reserve role.

Firkser served as a key first down specialist for the Titans last year while playing behind Jonnu. He had 39 receptions for 387 yards and one touchdown. He had 53 targets and only ONE drop. Those are not bad numbers for a backup.

Firkser was targeted by Ryan Tannehill, the fourth most on the team, despite only starting one game. Another key stat supporting Firkser as the new TE for the Titans is his contested catch rate: 76.9%, which makes him good for third overall in the league. His snap counts have been increasing every year, and he’s set for a full-time receiving role.

Why is Anthony Firkser About to Breakout?

There are many favorable reasons why Firkser is set to explode this year for dynasty fantasy football. Don’t fear that with the Julio Jones trade, Firkser’s going to lose targets. Jones was acquired to replace Corey Davis. He will garner a lot of targets but not eat into TE targets.

However, the Titans will be throwing enough to get some to Firkser. Jonnu, if he played the whole season, would’ve gotten 73 targets or so. It’s highly likely Firkser takes some of those and adds them to his previous 53.

Remember that the more targets a player has, the more opportunities for fantasy points. Additionally, opposing defenses will be consumed with stopping Derrick Henry’s rushes and covering both A.J. Brown and Jones. That’s going to leave a lot of open spaces for Firkser to sneak into and get some targets.

The Titans also have a new offensive coordinator after Arthur Smith left to become the Falcons head coach. His name is Todd Downing. The new O.C. was Firkser’s tight-ends coach; he is familiar with the new lead TE.

That’s plenty enough for Firkser to do damage in fantasy. I don’t think there’s going to be 97 targets for the TEs in Tennessee. That’s mainly because the only other notable tight-end on the roster is Geoff Swaim. He’s going to be the blocking TE. That helps Firkser focus on receiving the ball.

Our great Dynasty Nerds writer Alex Levin gave the Titans a prediction of 94 targets to the tight-end position in his yearly “Fantasy Opportunity Spotlight” series. Swaim never had more than 32 targets in a season. I doubt he approaches that at all this year. Firkser’s set up for a large share of those targets, which is gold for fantasy points.

As for Firkser’s price right now in dynasty fantasy? He’s being drafted in start-ups in the late rounds, around 14-17. People doubt him, and his price isn’t rising yet. However, once he starts performing in season, that price is going to go up.

Get Firkser for a mid-third-round pick right now. He may not end up a TE-1, but he will be in the range of 10-15. That’s a steal in the TE wasteland. Plus, he might blow up even more. Firkser is only 26, the prime age for TEs. Don’t miss out on the Black Friday price for Anthony Firkser.

Dynasty Breakout Players for the Rest of the AFC South

Admittedly, this team was hard to pick a breakout player. If only for the fact that there are no young guys or any standout, really. Brandin Cooks has broken out already. Same for Zach Cunningham. Thus, I went with the rookie wide receiver Nico Collins. He’s the best bet to break out this year for dynasty purposes.

The Texans traded up in the third round to acquire Collins. Collins is a big-bodied receiver who has the look of a WR1 for his team. He opted out of the 2020 college season. He runs deep routes primarily and is great with contested catches. Collins knows how to get free of DB’s and blow past them, as evidenced below.

If you have or can acquire Collins, do not expect a lot this year. He’s playing on what’s easily the worst team in the NFL. Tyrod Taylor and Davis Mills are projected to be throwing to him.

However, that won’t be the case forever. If you can handle his rookie bumps this year, next season will be his coming-out party. Of course, Collins’ price will also have risen after all the garbage-time plays he makes this year. He is already impressing in camp with highlight plays and a seasoned NFL player work effort.

Grab him for the price of a mid-second-round rookie pick or an equivalent player. If you’re rebuilding, grabbing a player like Collins in return for an older player is a brilliant plan. He is cheap right now. Get Collins before the rest of the dynasty community realize his talent.

Bobby Okereke is about to blow up this year. He’s set for consistent playing time following Anthony Walker’s departure from the Colts. Okereke has hard-tackling skills along with soft hands. Just a few weeks into training camp, and he already has three interceptions. Okereke has learned how to spot flaws in the offense with his eyes and trust them, which is huge for a middle linebacker.

That’s a tremendous value! Especially for a weekly LB2 that can sit in your flex the whole season. Get the best name to say in the NFL on your dynasty mixed-IDP and IDP-only teams now. Okereke’s price is going to rise tremendously as he starts making highlight plays in 2021.

Cisco is the new rookie free safety for the Jaguars. He was drafted in the third round of the 2021 draft. The Syracuse product is an explosive safety that combines angry aggressiveness with good coverage and hand skills.

Cisco is already taking first-team reps and dominating training camp. He’s excelling at coverage, breaking up passes, tackling, and stopping wide receivers in their path. Watch the video below for a glimpse.

He is doing all that and more, not even a year removed from a torn ACL. Cisco is a ball seeker and somehow finds the ball in his hands a lot. He intercepted 13 passes at Syracuse. He’s quick at the back-peddle and can rush the line fast. Cisco is a rookie and should only get better.

In rookie drafts, he was routinely falling to the third round. Now that he has performed excellently so far, he’s worth a future third-round rookie pick and a vet-DB. Cisco is perfect for dynasty teams trying to get younger or compete now. He will be good for a while, and you need to buy him now before he costs you DB1 prices.

I am always on Twitter at @DarthDbacks and in the largest Fantasy Football Chat on Discord under the same username. I hope this season goes excellent for you, and I’m happy to help on Twitter or Discord anytime! Also, happy to discuss Star Wars, Marvel, Baseball, movies, or writing with you.