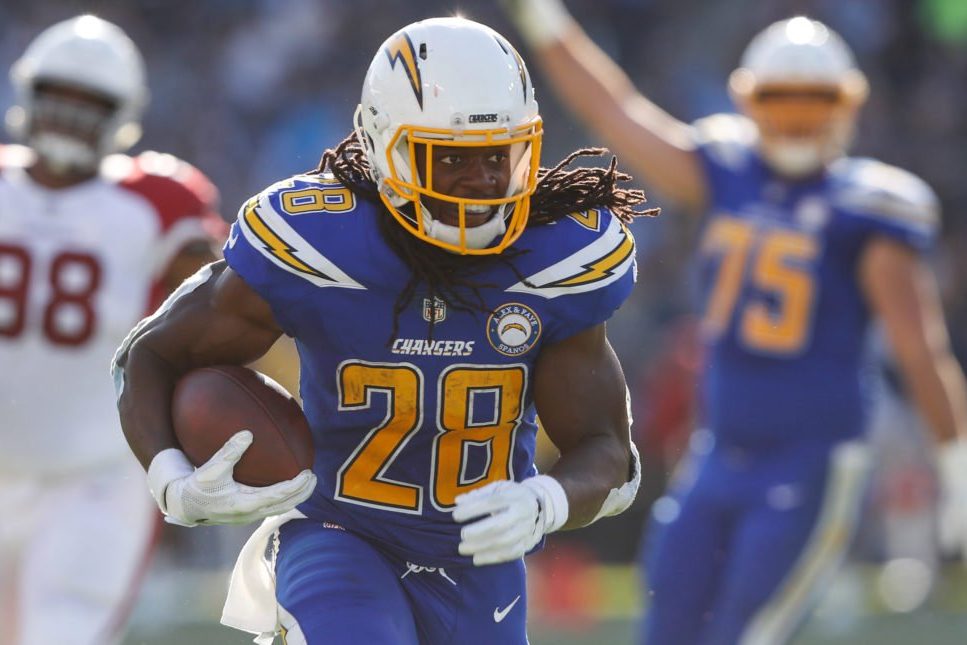 Well this was a little unexpected. Melvin Gordon III demanded a new contract, or else he wants out of Los Angeles. The Chargers’ star running back had his agent, Fletcher Smith, inform ESPN that he will not report to training camp until a new deal is made.

Los Angeles running back Melvin Gordon has informed the Chargers that unless he receives a new contract, he will not report to training camp and he will demand a trade, his agent Fletcher Smith told ESPN.

In Gordon’s four seasons with the Chargers, he has been highly productive, eclipsing over 1,200 yards in three of his four campaigns. While the former Wisconsin Badger has most certainly dealt with injuries often during his first four seasons, he still has produced at a very high level. Unfortunately, NFL teams have remained hesitant to pay RBs their proper worth. As we have seen most recently with Le’Veon Bell and Duke Johnson, these situations can get ugly if they drag on.

Make no mistake, Melvin Gordon III is a very good NFL RB, as you can see by his career stats. One of the wildest stats I found on the Chargers RB was that despite him not accounting for one single touchdown in his rookie season, he still has produced 38 career touchdowns. Essentially in three seasons, a total of 41 games, he has scored 38 touchdowns combined. As dynasty players, we are always looking for a complete back, and this is what Gordon brings to the table. He has caught at least 33 passes in each of his four seasons, his career-high being 58 in 2017, which was also his only season going over 1,000 rushing yards. His contribution to the pass game has always been a very underrated part of the Chargers offense; Gordon has excelled in this area over his career, as you can see by his 182 receptions, 1,577 yards, and 10 touchdowns. I think where many don’t see the value in Gordon is his true lack of a “bell cow” RB in reference to his carries. Now Gordon has amassed 1,079 touches in 55 career games played, but he’s only managed to carry the ball over 250+ times twice in four seasons. This isn’t terribly surprising, given the fact that Phillip Rivers throws for 4,000 yards regularly as well as attempting at least 500+ passes in every season since Melvin Gordon was drafted, including a league leading 661 attempts in Gordon’s rookie year 2015.

There isn’t a ton to dislike about Melvin Gordon outside of the injury history. Since being drafted by the Chargers in 2015, Gordon has played 55 of 64 career games, and his 1,000+ touches could be seen as a bad thing for an RB entering his 5th season at 26 years old. Outside of his price in dynasty leagues, mostly sporting a first-round ADP for three of his four years, Gordon has been extremely effective in those years. After four seasons played, Gordon has only eclipsed 1,000 rushing yards once and has never averaged over 20 attempts per game or over 77 rushing yards per game in his career. When drafting a running back so highly in dynasty leagues, you want that dependability and consistency, and those are the biggest reasons I could see for the Chargers or dynasty owners to want to deal MGIII, given his recent contract demands. Assuming Gordon wants something north of $40 million, I think it’s reasonable for the Chargers to be very hesitant, especially based on other top RB contracts around the league, where roughly ¾ of that salary is typically fully guaranteed. Only two current NFL RBs have a total value contract over $50 million; it’s likely Gordon will be looking for that. Considering the roster construction of the Chargers, as well as the upcoming loaded 2020 RB draft class, it simply doesn’t make a ton of sense financially to pay Gordon this kind of money.

We discussed the carry numbers not being there for Gordon to view him as an elite level back, but what he lacks in that regard he makes up for in the pass game. There is a true balance there, which makes Gordon more complete than it appears. Although he only has one 16 game season under his belt, the Chargers RB has managed to finish as a top 8 RB in each of his last three seasons.

In a worst-case scenario, if the Chargers do trade their starting RB, what’s their backup plan? First up would be Austin Ekeler, who has proven valuable not only in games Gordon missed, but also in ones Gordon played. One thing Ekeler is not is a 20+ touch a game RB, and everyone should be extremely aware of this. Since entering the NFL, the Western State RB has amassed 153 carries, 814 rushing yards (5.3 YPC), and 5 rushing touchdowns. Ekeler is this new breed of RB who contributes mostly as a pass catcher, as seen by his 66 receptions, 683 receiving yards and 6 touchdowns in two seasons with the Chargers. Ekeler has had double-digit carries five times in his 30 career games and has never gone over 100 yards rushing. While Ekeler has a few interesting stats in his favor, none of those lead me to believe he can ever be anything more than a 10-15 touch per game RB, which is perfectly fine but doesn’t make him the replacement to Melvin Gordon. Beyond Ekeler, the Chargers’ depth chart includes former Northwestern RB Justin Jackson, who started one game in his rookie season. Jackson’s 2018 campaign saw him carry the ball 50 times for 206 yards and 2 touchdowns, while hauling in 15 receptions for 135 yards. It’s worth noting that while age may be a factor in the Chargers potentially not extending Gordon, both Ekeler and Jackson are only two years younger than him, so if the Chargers are looking to get younger, the answer might not be on their roster currently. There’s always potential, if Gordon chooses to sit out or is traded, that the Chargers could bring in another RB through trade or free agency, but for the sake of not speaking in hypotheticals, I chose to break down what the current roster offers.

This happens far too often in dynasty and might be the reason that makes this game so great. When a player ends up in a contract dispute or gets in trouble with a legal issue, as a dynasty owner what do we do? We have seen it over the years with Josh Gordon, Martavis Bryant, Lev Bell and most recently Tyreek Hill; there’s a small window of opportunity to both buy or sell that could make or break your dynasty team, and it’s important to take advantage of it if possible. I think on this one I would trust my gut. If you feel that Gordon, no matter what, will be a RB1, which he’s proven he can be over the past three seasons, then you hold or are looking to acquire him if you don’t already roster him. I personally see his production tied to his value as a receiver and a touchdown scorer; if those numbers drop off in another offense, assuming he’s dealt, then he loses major value as a dynasty asset. As dynasty owners, we are always trying to be ahead of the game to improve our teams. In this situation, It boils down to a judgement call. On one hand, you have a RB inching closer to 30 years old who will demand a large contract and has over 1,000 touches and an injury history. On the other hand, you have a RB who has proven that he only needs 12 or 13 games to finish as a RB1 by season’s end.

Good luck, Nerd Herd. I wanted to give an instant reaction piece on the news to provide owners with enough information to potentially make the best decision they can regarding Melvin Gordon. As more news breaks, the writers at Dynasty Nerds look forward to providing the most up to date content to help you succeed and win those dynasty championships.