@Glosser13 gives you a first quarter breakdown of all things IDP in the dynasty nerds quarterly report. 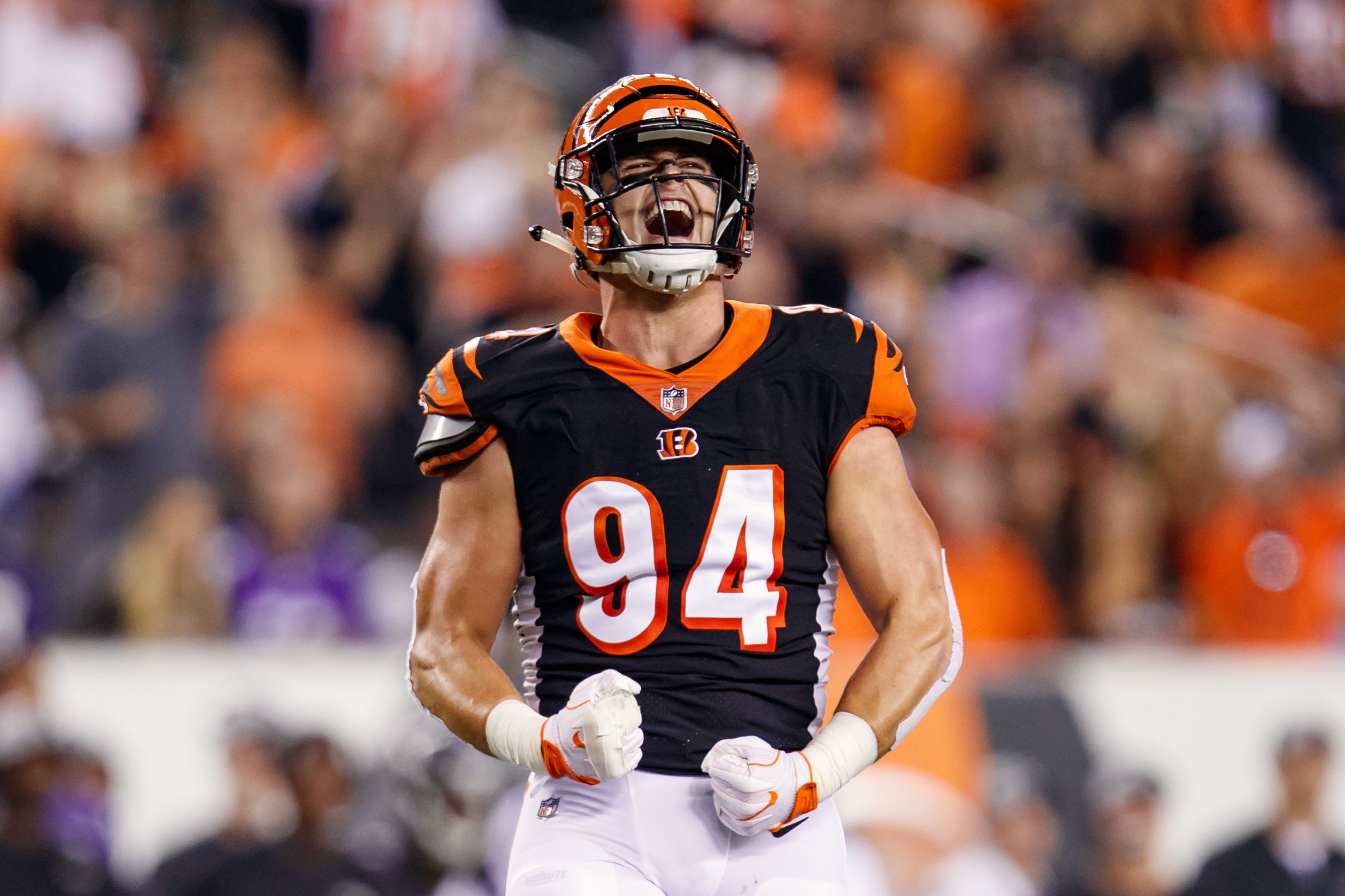 Welcome, IDP Nerds, to the first edition of the 2021 IDP quarterly report. This is where we will look at all things relevant to IDP fantasy football over the first four games of the season. As we move along the season, things change so quickly that opening a discussion will help IDP managers be more informed on player values. This report will include top performers at all three positions (DL, LB, DB) and buy low and sell high players. I’ll look to make it as informative as possible and appreciate any feedback that would make it better for the readers.

Javon Hargrave has been outstanding for the Philadelphia Eagles the first month of the season. Hargrave has 5 sacks and a forced fumble in his first four games with weekly finishes of DL7, DL35, DL2, and DL23.

Chase Young has failed to record a sack this season and currently ranks as the DL69 through four weeks. The former Ohio State Buckeye is regarded as one of, if not, the most valuable DL in dynasty IDP leagues. It has been a disappointing start, but there’s no need to panic when things like this happen, and he will bounce back, that production just isn’t there, but he will come around.

The Kansas City Chiefs DT has been quiet to start the season. Jones has three straight single-digit performances after recording 24 fantasy points after a 2 sack game in week 1. 70.59% of his season production is from week 1, as mentioned with Chase Young players go through slumps like this, and it’s important to be patient. Chris Jones may be a more affordable option in non-DT-required leagues. If there’s an opportunity to acquire him, I encourage you to do so. Jones has not had less than 6.5 sacks in any of his last three seasons.

Von Miller hasn’t been an effective IDP since the 2018 season when he notched 14.5 sacks and 8 impact plays (4 forced fumbles, 3 fumble recoveries, and an interception). Miller is off to a hot start this year with 4.5 sacks. He ranks as the DL10 on the season. The Denver pass rush specialist has always been a sack master, and he racked up 63 sacks from 2014 to 2018.

Von Miller has always been a low-volume tackler, which hurts his fantasy value. He hasn’t had more than 47 tackles in a season since 2017. If you’re not a contender or happen to have the depth at DL, now would be an ideal time to sell and get what you can. Miller is averaging 17 fantasy points per game. There’s no reason to keep him on your roster if you’re rebuilding.

The pair of Tampa Bay Buccaneers were LB1 and LB14, respectively, last season. Through just four games this season, two of the best LBs in the game haven’t been nearly as good. In 2020 Devin White averaged 22.64 fantasy points per game, and David averaged 16.06. Through four games this season, White averages 14.25 and David averages 15.50 fantasy points per game. These are still very respectable numbers. The pace Devin White was producing at a year ago was not sustainable, as we’ve seen through just four games. Nine sacks would be very tough to replicate for White, but his tackle numbers should remain consistent enough to keep his value safe as one of the best IDP linebackers in dynasty fantasy football.

The Houston Texans LB finished as the LB4 overall last season. Cunningham has racked up 405 tackles over the past three seasons. He has already missed one game due to COVID-19. He’s also being outproduced by veteran free agent LB Christian Kirksey (18.5 FPPG) to Cunningham’s 13.6 fantasy points per game.

The New York Giants LB was on track to register his fifth straight 300+ point fantasy season. Martinez averaged 17 FPPG over his first two contests before tearing his ACL in Week 3 against the Atlanta Falcons. Blake Martinez’s injury was crushing to IDP managers. It’s very difficult to replace the production he brings after four straight seasons as an LB1.

All three LBs were poised to make a big impact this season. While their respective injuries won’t keep them out for the whole season, they have all been designated to short-term IR, costing them valuable games. It’s extremely frustrating as a dynasty manager when players you’ve been counting on for high-level production aren’t available for you to put in your starting lineups weekly. Luckily, over the past few years, plenty of waiver wire LBs have found a starting role. Some have even exceeded expectations making the loss of those players you spent draft capital on less impactful.

The Cleveland Browns LB situation has been a dumpster fire over the past few seasons with little to no consistency. Anthony Walker came over from the Indianapolis Colts this off-season to help improve that group. Walker wasted zero time putting IDP managers on notice scoring 18 fantasy points on 10 tackles while playing 62 snaps. The former Northwestern Wildcat would head to IR after the game, essentially killing his short-term value. If you’re looking for consistency from a Cleveland Browns LB, Anthony Walker could be that guy. There’s a buy-low window there with his early-season stint on IR.

The former Utah State LB has been off to a hot start this season. Nick Vigil was a top 12 LB after the first quarter of the season, filling in well while Anthony Barr was out due to injury. Vigil averaged 19.2 fantasy points per game over that span while playing an average of 65 snaps per game. Vigil is a veteran LB who has played for three teams over the past three seasons. He is great depth at LB, but it’s likely with the imminent return of LB Anthony Barr that his snaps will be cut in half. That’s the best-case scenario. If you can find a dynasty manager who looks hard into season points or points per game average, you can sell Vigil before the production dip happens.

One of the Buffalo Bills’ defensive leaders is most known for his versatility and coverage skills in the secondary. Micah Hyde hasn’t recorded a 200+ point fantasy season since 2017. Hyde has turned it around this year. He’s averaging 17.27 fantasy points per game and ranks as the DB5 after this first month of the season. While Jordan Poyer gets most of the credit for being the top DB from a dynasty perspective, Micah Hyde has put IDP managers on notice that he’s fully capable of producing DB1 numbers.

One of the most frustrating players over the first quarter of the season. Heading into the 2021 season, he was a consensus top 5 dynasty DB. Jeremy Chinn has struggled mightily to produce top-tier numbers. Through four games, the Panthers’ safety is averaging just 9 fantasy points per game, 4.25 tackles per game, and has recorded zero impact plays. This shouldn’t alarm patient IDP managers. Players go through these droughts at times. Dynasty managers should be fully confident Chinn will bounce back and produce elite-level production again in the second quarter of the season.

Johnathan Abram is one of the most feared hitters playing in the secondary in the NFL. His production is tied to his high tackle floor. Abram had 79 tackles in just 13 games last season, scoring a career-high 187.9 fantasy points. If the Las Vegas DB can just stay on the field, he will continue to produce. He has the tag of “injury-prone,” which has been true over his first two seasons. When he’s on the field, he is a difference-maker for your IDP dynasty teams. Abram has averaged 14.5 fantasy points per game and nearly 8 tackles per contest.

It’s not often you find someone calling for trading the overall DB1 just one month into the season. However, DB production can be unpredictable at times, and Trevon Diggs has benefited from high-volume impact plays. According to PFF, the Cowboys cornerback ranks 2nd in the NFL in targets while ranking tied for 19th in receptions allowed. It shouldn’t be long before opposing offensive coordinators put together more specific game plans to not target the NFL league leader in interceptions. You can find production even in CB-required leagues that can help you win games. If an opportunity presents itself to get future picks or help at another position, you should jump at the chance.

The IDP team of dynasty nerds would like to thank you for all the continued support. We are in the process of overhauling our IDP rankings to make them easier to sort. We are dedicated to continuing to grow as a team and keep bringing you as much data as possible to crush the IDP side of all your leagues. I truly hope you found this first quarter IDP report informative and look forward to bringing you another one very shortly. As always, check out all the amazing work my colleagues at Dynasty Nerds are producing and continue to push for that first or next dynasty fantasy football championship.