The Browns’ look to move forward in 2022 but where will the offense go next? Is Baker the QB for the future? 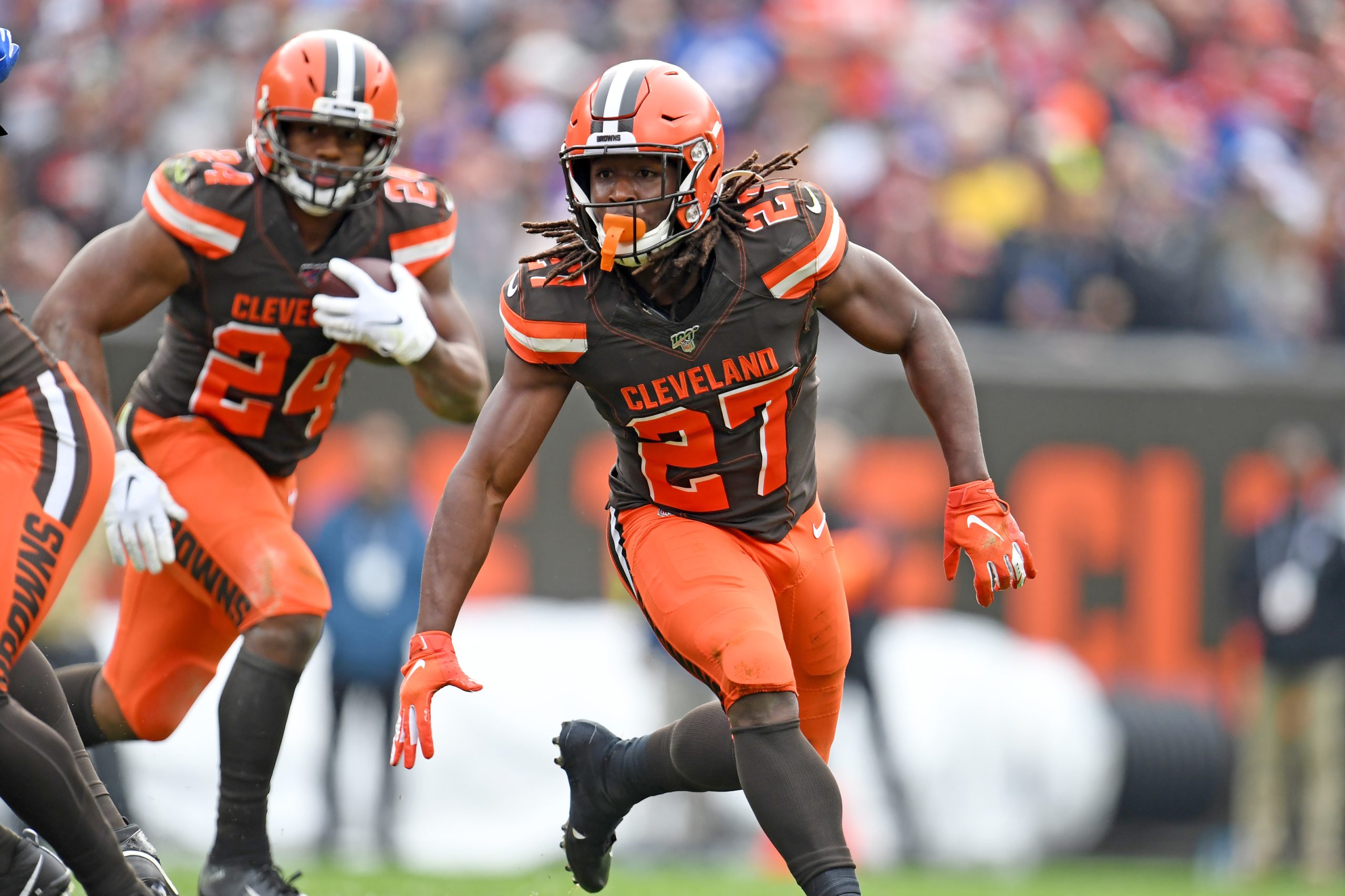 Who has More of a Future Nick Chubb & Kareem Hunt?

The strangest battle between two 27-year-old running backs doesn’t sound appealing, right? We know the running back life cycle declines once they hit 25 years ago. These two backs are possibly gaining more longevity over the last two seasons due to splitting the workload and sadly being off the field with injury and covid. We’ve seen running backs like Adrian Peterson and Frank Gore go into their late 20s and even early 30s be successful running backs. We know not all running backs have that unique ability to have long-lasting careers. We are at a crossroads with these two in the dynasty, but who is better suited for the dynasty’s future.

Chubb looked like a possible top-three fantasy running back after his 2019 season when he had almost 1500 rushing yards and saw close to 50 targets. He was just two carries away from that 300 mark, thinking he would be a dominant workhorse back. During that 2019 season, Hunt had signed and made an impact that pushed Chubbs’ usage down over the last two seasons. From the numbers below, you’ve seen Chubb take a significant downtake in touches close to 50.

Even with the downtake in touches, Chubb continues to show his talent as he has had over 5.0 yards per carry in each season and has scored no less than eight touchdowns. He is signed through the 2024 season when he will be 29. Compared to most workhorse backs like Zeke Elliot or Derrick Henry, his usage pace is a whole season behind these guys, so an opportunity to last longer in the league.

Hunt had one of the better rookie seasons for fantasy and looked like a star in the making. Hunt was involved with some serious off-the-field stuff which got him cut from the Chiefs. The Browns did pick him up, and he has gone out to continue to be the back he was in KC. In 2020, Hunt had his best season with the Browns rushing for 846 yards and saw 51 targets. Hunt has turned into a dual-threat third down and passing situation running back as he has paced for over 40 targets each season with the Browns.

The easy answer who would be the one you want is Chubb. While Chubb is likely a sell-high candidate due to his age, he is still with the Browns another three seasons to likely be the bell cow running back. Since Chubb hasn’t endured the same workhorse level usage some backs use, then he could have a few solid low-end RB 1 seasons. On the other hand, Hunt is tricky since I’m not sure how most of the league feels about his off-field issues if Hunt will get another chance at a workhorse role. He is a free agent in 2023 and has shown to be an excellent change of pace running back that could continue his career for a while, but that comes with a price to pay. Hunt is risky but could out career Chubb based on his skill sets. Chubb is the guy you want for the next two to three seasons, as he is likely to see the usage consistently.

In dynasty, it’s important to realize potential breakout in players, and the Brown may or may not have three possible players in that. D’Ernest Johnson saw the opportunity this season and lit up the fantasy points. Donavon Peoples-Jones showed flashes that give us hope for the future. Harrison Bryant is going into year three and possibly less competition among the tight-end group.

Johnson was able to see opportunity in the heavy-run offense due to some injuries and covid situations. In week seven, during Johnson’s giant game vs. the Broncos, he went on to be RB 36 and produce three RB1 one games. Unfortunately, Chubb and Hunt eventually returned, so Johnson had to take the backseat too often. In the three games, he was an RB1 and averaged 150 all-purpose yards, a touchdown, and four targets per game. While Johnson has been in the league for three years now, he was an undrafted running back with a physical running style to his game.

Johnson is a restricted free agent in this offense so that the Browns could counter an offer, but they may cut their losses with who they have in that backfield. He could be looking at starting gigs next season. Johnson could be brought for an early third if you can.

Peoples-Jones was the field stretcher for the offense and big-play ability receiver. He was third in yards per reception at 17.6 and sixth in yards per target at 10.6. Peoples-Jones didn’t see much consistency in his production, but he showed flashes with potential. In games, he connected with Baker; he provided solid production. He averaged three receptions for 59 yards for about eight fantasy points per game in games where he saw five-plus targets. Peoples-Jones had to deal with a quarterback with a banged-up shoulder, so expecting a healthy baker next season could be good. Depending on how the offseason goes, he could find himself as the one or the two receiver in the offense. If someone is willing to give him up for a third, then I’d take the chance on Peoples-Jones, but I don’t have much faith; he will become a consistent fantasy producer.

Bryant might be the sneakiest of these three because he hasn’t shown enough that fantasy owners are dying to own him. Bryant has compiled on average 20 receptions for 230 yards and three touchdowns as the team’s third tight end in back-to-back seasons. He wasn’t anything to wow about since he was a fourth-round pick coming out of college. He was one of the players who had many good traits but not great, and he needed to build strength. Bryant did have six TE2 performances, which doesn’t hold too much, but it’s not bad as a third tight end.

Since he is a free agent, David Njoku could be gone, and Austin Hooper’s contract could be cut with minimal loss to the cap. Bryant could find himself in more of a full-time role on the offense that likes to target their tight ends. The Browns’ tight ends combined 145 targets and a 27% target share for the position. Bryant could be a deep buy low for a late 3rd or fourth-round pick.

Mayfield has been in the league for four years now, and I think we’ve seen just about enough to understand who he is or have we? Since his rookie year, Mayfield has not finished better than QB 16 in fantasy. He continues to finish as a low-end QB2 in fantasy, with 2021 being his worst season. Mayfield has thrown double-digit interceptions in three of four seasons. He has yet to eclipse 4000 passing yards in this modern age passing league. Mayfield has seen his attempts and yards drop over the last three seasons. As a rusher, he doesn’t offer much of a threat on the ground, averaging just 150 rushing yards each season.

We have to look at both sides of Mayfield, and we’ll start with the positives. In 2020, when Odell Beckham was placed on IR with an injury, Mayfield was on fire in the offense. He was on a career pace to have over 4000 yards and match his rookie season 27 touchdowns. The impressive stat as he was on pace to throw just three interceptions with his career-best 64% completion rate. With a dominant run game between Chubb and Hunt, Mayfield succeeded. Being able to spread the ball around the offense opened up his talents as a passer.

Mayfield had moments in 2021, especially vs. the Chargers. He ended up throwing 23 of 32 passes on a 305 passing yards day with two touchdowns. Those games were rare since Mayfield only threw 300 yards twice all season and had just six games where he threw at least two touchdown passes. In the second half of the season, the turnover rate started falling as he played in six games and threw ten picks. We could chalk up this season to Mayfield’s injury since he did suffer a torn labrum in week two and continues to play on and off of it all season. He did get surgery to fix it in January, so the shoulder should be healed by the season of 2022.

The offense could look very different, especially with possible cap casualties like Jarvis Landry, Hooper, and Hunt. This would likely give the Browns the ability to sign one or two potential receivers in an excellent free-agent class. They have the 13th pick in the draft to get one of the elite receivers in the draft class. I don’t think Baker will live up to the first overall pick and be like a Josh Allen or Patrick Mahomes but could still provide solid QB2 value in Superflex leagues. I’d be going in to put low offers on Mayfield, especially in a weak QB class. A late first for Mayfield or possibly two second-rounders is a small price to pay for a QB.