@WooLee_FFB recaps the rookie shining stars and duds of Week 8 of the 2021 NFL season. 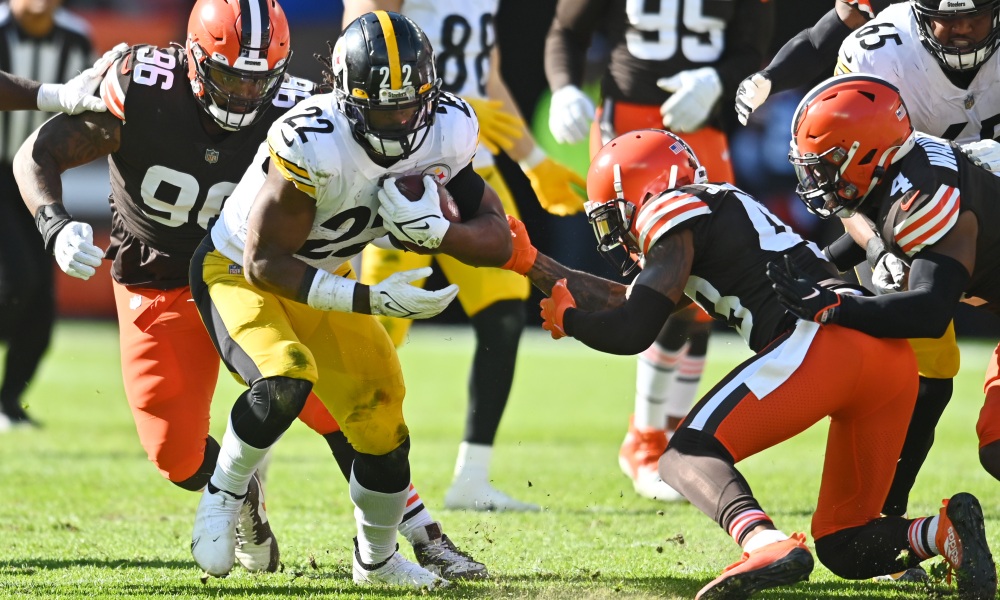 The 11th overall pick in the 2021 draft finally broke out for fantasy managers. Fields threw for 175 yards with a touchdown and an interception. It was an average night from the air but excellent on the ground. Fields rushed for 103 yards and a touchdown. Fields finally started to look like what many dynasty managers hoped he would be when drafting him in the first round. It was encouraging to see how the Bears are starting to figure out how to use Justin Fields. He was free to improvise with his legs and allowed him to make plays on the move. This is an encouraging sign to see as the Bears have struggled to get anything going offensively this year. Although Fields shined in this game, it’s still hard to trust the Bears’ offense in fantasy. It’s best to leave Fields on the bench unless dynasty managers have to start him. Next week, Fields will be tested against the Pittsburgh Steelers, who are ranked 7th against opposing fantasy QBs in 2021.

Elijah Mitchell shined once again and is now in consideration as a rookie breakout. Mitchell rushed for 137 yards and a touchdown in Sunday’s game against the Bears. He has taken over the lead role for the 49ers, and he hasn’t slowed down. He’s accounting for 72% of the opportunity share in the backfield and 63.4% of the snap share for the 49ers. Mitchell should continue this dominance and should produce at an RB1 level if he’s healthy. Jeff Wilson won’t return until at least Week 10, so Mitchell should continue to be a strong RB2 with RB1 upside against the Cardinals in Week 9.

Michael Carter had a breakout game on Sunday against the Bengals. Carter rushed for 77 yards and scored a touchdown. He also added 9 receptions and 95 receiving yards. The backfield of the Jets has been steadily trending towards Carter. Carter took over the backfield as he accounted for 70% of the opportunity share in this game. One of the biggest positives in this game is how much work Carter received in the passing game. Carter was effective in the passing game and therefore was rewarded with 14 targets. The New York Jets have struggled to find success on offense, and it seems that they have figured out a plan. When Zach Wilson returns from his injury, dynasty managers should expect it to be completely different from what they saw in the first half of the season. This new game plan of emphasizing the run and short to intermediate passes should provide a ton of opportunities for Carter. Carter should be a solid flex to RB2 for the rest of the 2021 season and has a bright future in a young offense.

Harris continued his run of RB1 production with 21 points (PPR) against the Cleveland Browns. Najee Harris continues his dominance of the backfield, and it doesn’t seem like he’s going to be giving it up any time soon. Harris rushed 26 times for 91 yards and a touchdown. He also caught all 3 of his targets for 29 yards. Harris continues to be the workhorse for this Steelers offense. Although the Steelers’ offense hasn’t looked great this season, it seems like Harris is consistently finding work. Harris has proven to Coach Tomlin as an important piece to this offense, whether it’s him running the ball or receiving the ball. Harris should continue to reward Dynasty managers by producing RB1 numbers. He should have a nice matchup against the Chicago Bears in Week 8 that just surrendered 137 rushing yards to Elijah Mitchell.

The Philadelphia Eagles dismantled the Detroit Lions as the final score of this game was 44 – 6. The Philadelphia Eagles heavily punished a poor run defense by rushing 46 out of 62 total possible snaps on offense. Jordan Howard, Boston Scott, and Kenneth Gainwell were all given at least 10 carries, but Gainwell seemed like the odd man out in this game. Boston Scott started this game, but it was Jordan Howard who came in as the backup. It wasn’t until the second half that Gainwell started to get involved. Gainwell rushed 13 times for 27 yards and didn’t record a target or a reception. This is concerning to see as many dynasty managers expected Gainwell to take over the majority or at least 50% of the workload. It is hard to gauge what type of role Gainwell will have going forward, and dynasty managers shouldn’t trust Gainwell until proven otherwise.

The game script really hurt Smith in this contest. Despite the huge scoring day for the Eagles, Jalen Hurts only attempted 14 passes. What’s getting more concerning for Smith is that Dallas Goedert has become heavily involved in the Eagles’ passing offense. Devonta Smith should continue to be the WR1 for this team, but it seems like Smith will go as far as the offense goes. With the current state of the offense, dynasty managers should lower their expectations for Smith going forward. Smith is a solid flex option with WR2 upside every week.

The entire Dolphins offense struggled in the divisional matchup against the Bills. The Bills’ defense stood strong as they held Waddle to 4 receptions (on 12 targets) and 29 yards. It was a bad day for the Dolphins as they fell behind late in the ball game. Although Waddle had a bad day from the field, it is still encouraging to note that he was still the most targeted receiver Sunday. Waddle had been a nice flex play so far in 2021, and he doesn’t necessarily need to do well to produce flex-type numbers. Jaylen Waddle’s numbers should improve as the Dolphins improve their roster in the coming years. Waddle will continue to have a huge role in this Dolphins offense and should confidently be started as a Flex or as a WR3 every week.

The #4 overall pick of the 2021 draft fell back to Earth again in Week 8 against the Carolina Panthers. After two straight 100 + yard performances, Pitts only had 2 receptions (on 6 targets) and 13 yards. Pitts had his worst game yet as Matt Ryan threw 2 interceptions and only had 146 passing yards, which hurt the entire passing attack. Though Pitts had a bad game, it’s encouraging to see Pitt’s usage rate trend upwards. Pitts accounted for 83% of the snaps and has now become the focal point of the offense. With Calvin Ridley gone, Kyle Pitts should have better weeks. The entire NFL world knows Kyle Pitts, and he should face multi-person coverages, but the volume should allow Pitts to stay in the running to finish as a top 3 fantasy TE.