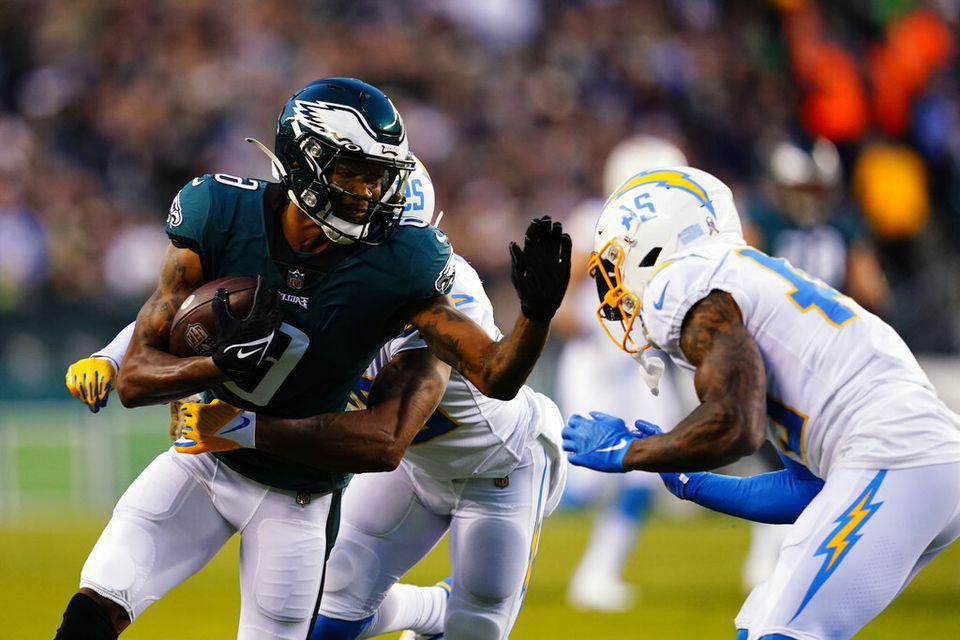 Week 9 of the 2021 NFL season is now over. Here are the teams that come back from their bye weeks in Week 10: Tampa Bay Buccaneers, Seattle Seahawks, Washington Football Team, and the Detroit Lions. Looking ahead, here are the teams that have their bye weeks in Week 10: Chicago Bears, Cincinnati Bengals, New York Giants, and the Houston Texans. Though this week has been weird for fantasy football, here are your stars and dud rookies in Week 9.

Even with the Jets forced to play their third-string QB, Moore produced on Sunday against the Colts. Moore caught 7 out of 8 receptions for 84 yards while also scoring 2 touchdowns. Overall, this was quite a surprise for the New York Jets as third-string QB Josh Johnson filled in nicely when second String QB Mike White went down due to a wrist injury. Elijah Moore continues to become a more significant part of this offense even with Jamison Crowder back in the fold. After a disappointing first half of the season, Moore is starting to have a nice start to the second half of the season. Moore has now produced over 10 fantasy points in the past three games and could be a fine flex play every week. Though his role in the offense grew in the past three games, it is still hard to trust the Jets offense. It is also hard to predict what Moore’s role will be with Corey Davis expected to make his return in Week 10. Dynasty managers should lower their expectations for Moore in week 10 when the Jets face off against the Bills.

Jaylen Waddle has proven again why the Dolphins drafted him as the 6th overall pick in the 2021 draft. This was an ugly game by both the Texans and the Dolphins. Both quarterbacks combined for 6 total turnovers in this game, but Waddle was able to produce through the poor performance. Waddle caught 8 of 10 targets for 83 yards. Jaylen Waddle has seemed to have a firm grasp of the WR1 role for the Dolphins. Waddle is dominating the snap share, and he only went under the 75% snap share mark only once. The Dolphins are clearly looking to keep him involved in the offense, and it seems like he will get consistent targets. Though fellow Jamarr Chase has outshined all rookie wide receivers in 2021, Waddle is not far behind as the WR2 of this draft class. At the current moment, Waddle is a solid WR2 for dynasty managers in 2021 but shouldn’t be surprised if Waddle enters the conversation as a top 15 dynasty WR sooner than later.

Devonta Smith had his second 100+ yard performance in Week 9 against the Los Angeles Chargers. He caught 5 of 6 targets for 116 yards while also scoring a touchdown in the loss to the Chargers. Despite Jalen Hurts only attempting 17 passes, Smith was efficient with the limited opportunity. Even though Smith had a big game on Sunday, he still was tied for targets with Dallas Goedert with 6 targets. While Smith is the undisputed WR1 for the Eagles, the passing volume has been drastically reduced. With the emergence of Jordan Howard being productive on the ground, it seems that Nick Sirianni has completely changed his philosophy. Although Smith could have big games like this again this season, dynasty managers shouldn’t count on it. Until this offense starts to air it out more, dynasty managers should be concerned with the lack of volume for Smith. Smith will be up against a stingy Denver defense that just held CeeDee Lamb and Amari Cooper to only 2 receptions and under 40 yards receiving.

Williams was efficient and effective in a dominant win against the Cowboys. Williams carried the ball 17 times for 111 yards. The Broncos put on a dominant performance, and the 16 points the Cowboys scored came from garbage time in the 4th quarter. Although Williams produced his first 100 rushing yard performance of his career, Melvin Gordon was still given the lead RB role. It is to note that Gordon and Williams are still splitting the carries 50-50. Gordon is still a big part of this Denver offense, and he is producing enough to allow him to retain his starting role. It is not trending towards the right direction a lot of dynasty managers hoped for this season and will have to consider looking for his breakout in 2022. Until Gordon is gone from this Denver offense, Williams will continue to be capped with his opportunities.

This was another disappointing outing for Kadarius Toney. Toney caught his only target for 9 yards and rushed for -2 yards. The entire receiving core of the Giants was in a slump in this game. Kyle Rudolph was the only player to receive 5 targets. Although Daniel Jones only attempted 20 passes, the Giants still came out on top against a struggling Raiders offense. This has been disappointing as many dynasty managers were hoping for a bounceback. Although the Giants ultimately won this game, the offense went through the running game. Dynasty managers know what he is capable of doing when he does get the opportunities. Overall, this is a frustrating situation and a bad start to the second half of the season. Toney has a bye week in Week 10, but dynasty managers should lower their expectations when he returns against the Tampa Bay Buccaneers in Week 11.

Kenneth Gainwell had another disappointing performance in Week 10. Gainwell only rushed twice for 3 yards, but he did score a lone touchdown. This situation has gone in the completely wrong direction for Gainwell. There were a lot of hopes that Gainwell would be the main beneficiary in Sanders’ absence. Jordan Howard has emerged and gained Nick Sirianni’s favor. Gainwell and Scott seem to be splitting third down duties, but Gainwell looks like he is losing the battle. Scott was given 10 carries compared to Gainwell’s 2. It is hard to predict what will happen to Gainwell going forward in this Eagles offense. As Jordan Howard continues to gain opportunities, Gainwell’s role is slowly diminishing. Dynasty managers should hope at this point that Gainwell will have a larger role next year.

The Bills vs. Jaguars game was a head-scratcher as both QBs struggled to get anything going the entire game. Lawrence struggled in this game, but the Jaguars won against an equally struggling Bills’ offense. He barely cracked the 100 yards with 118 passing yards on 26 attempts. Lawrence has only produced the 20-point threshold only once this year in fantasy. For dynasty managers, they should lower their expectations for Trevor Lawrence going forward. The Jacksonville Jaguars seem like they are still under a poor coaching staff and poor play-callers. Expect Lawrence to realistically produce low-end QB2 numbers with QB1 upside. He’s still startable in Superflex leagues, but it may be wise to consider a more consistent option in 1QB formats. Lawrence may struggle once in a division rival game against the Colts in Week 10.

Jones struggled in this game against the Carolina Panthers but escaped with a win in Week 9. Mac Jones threw for 139 yards on 18 attempts while also throwing a touchdown and an interception. He lost a fumble in this contest as well. Mac Jones has been good for the Patriots in real life, but he’s been frustrating in fantasy. Mac Jones has only eclipsed 20 fantasy points only once this year and 15 fantasy points three times. Though he’s undoubtedly the most successful rookie QB, his fantasy ceiling is capped by the Patriot game plan. Jones does not attempt many downfield passes and relies on the run game. He can become an interesting option if New England improves their passing game. For now, he will be a low-end QB2 option against the Cleveland Browns.