Albert Okwuegbunam made a splash in a limited performance in 2020 leaving him poised to make the leap to fantasy relevance in 2021. 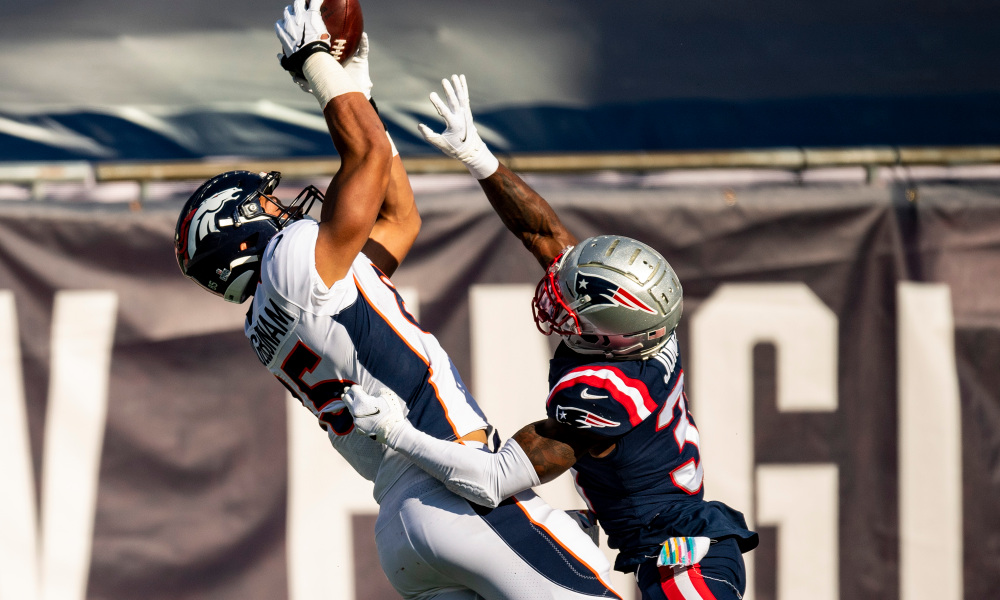 We’re at the point in the dynasty off-season where you want to grab those players with potential and prospects that could help you win it all during the season. For me, one of those players is Albert Okwuegbunam, or Albert O., a tight end for the Denver Broncos.

The Broncos took Albert O. in the fourth round of the 2020 NFL Draft. It was a mild surprise since the team took receivers in the first (Jerry Jeudy) and second (K.J. Hamler) rounds of the draft. The team also had former Iowa tight end, Noah Fant, its first-round pick in the 2019 draft. But Albert O. was a college weapon at Missouri, catching 98 passes for 1,187 yards and 23 TDs in three seasons. He also did a lot of that damage with Broncos’ quarterback Drew Lock as his college passer. He caught 72 passes, going for 17 TDs in his first two seasons while Lock was his quarterback.

That old connection seemed to spring to life as Albert O. hit the field for the Broncos. In his second professional game, Albert O. saw seven targets, catching all seven for 60 yards. The next week he only caught one pass, but it was for a touchdown. But as quickly as he started coming on, Albert O. was injured and lost for the rest of the season. In total, he appeared in four games, saw 15 targets, and caught 11 for 121 and a touchdown.

It was a small sample size, and there are obstacles, but Albert O. is a player with potential. Let’s consider his situation.

When Albert O. was drafted, he joined a crowded tight-end landscape for the Broncos. Last season, six players took snaps at the position. In addition to Albert O. and Fant, the Broncos used veterans Nick Vannett, Andrew Beck, Jake Butt, and Troy Fumagalli. Fumagalli and Butt are free agents and not likely to be back. The Broncos currently have five tight ends under contract with Fant, Albert O., Vannett, Beck, and Austin Fort. That makes the competition for targets fierce.

In 2020, Albert O. saw 15 targets while Fumagalli saw 15 targets, Vannett had 21, and Butt saw four. Had he stayed healthy, it’s possible Albert O. would have eaten into the targets from Fumagalli and Vannett. And given the emergence of Albert O., Vannett may be a veteran cut this off-season, freeing up even more targets.

But the biggest impediment at the tight end position is Fant. Fant saw 93 targets in 2020, producing 62 receptions for 673 yards and three TDs. Fant finished as TE9 in 2020 and is one of the best young tight ends in football heading into his third professional season.

It’s not only a crowded tight end landscape that presents a challenge for Albert O. but a crowded pass-catching group. The Broncos have veteran receiver Courtland Sutton returning from injury. Veteran Tim Patrick, who caught 51 passes in 2020, is slated to stay on the team. Second-year receivers Jeudy and Hamler will also vie for increased targets. All those options crowd into a passing game that produced 556 attempts and 317 completions in 2020.

While there is a crowd, Albert O. is a talented player the Broncos used a fourth-round pick on in 2020. And in his first two games as a professional, the young tight end saw 13 targets and caught nine passes. It shows his potential to make an impact despite other options. He’s an excellent stash if Lock, his old college teammate, remains the quarterback in Denver.

Another reason for optimism is Offensive Coordinator Pat Shurmur. Throughout his time as a play-caller, Shurmur has used the tight end heavily. When he’s had two options, as he did while running the Philadelphia Eagles offense, he’s used both. In 2014 and 2015, Shurmur had veteran Brent Celek and rising star Zach Ertz. During 2014, Ertz saw 89 targets for 58 receptions, 702 yards, and three TDs, while Celek saw 51 targets, catching 32 for 340 and a TD. In 2015, Ertz exploded for 112 targets, catching 75 for 853 yards and two TDs, while Celek saw 31 targets, catching 27 for 398 yards and three TDs.

If you’re holding on to Albert O. thinking he’s going to be your weekly starter, that’s a long shot. Barring an injury to Fant, Albert O. will merely be another option in the passing game. But in leagues that play two tight ends or offer a tight end premium, he’s a low-cost stash that could return dividends.

Given the offense, his history with Lock, and his frame, Albert O. has the potential to be a TE2, especially if he becomes a reliable goal-line weapon. At his current ADP of TE61, that’s an end of roster bargain.