We asked. You delivered. Did your trade make the cut? Stop by as @domffl @andy_buckler @DynastyFF_KyleM and @DynastyPhilDawg break down your trades from Twitter. 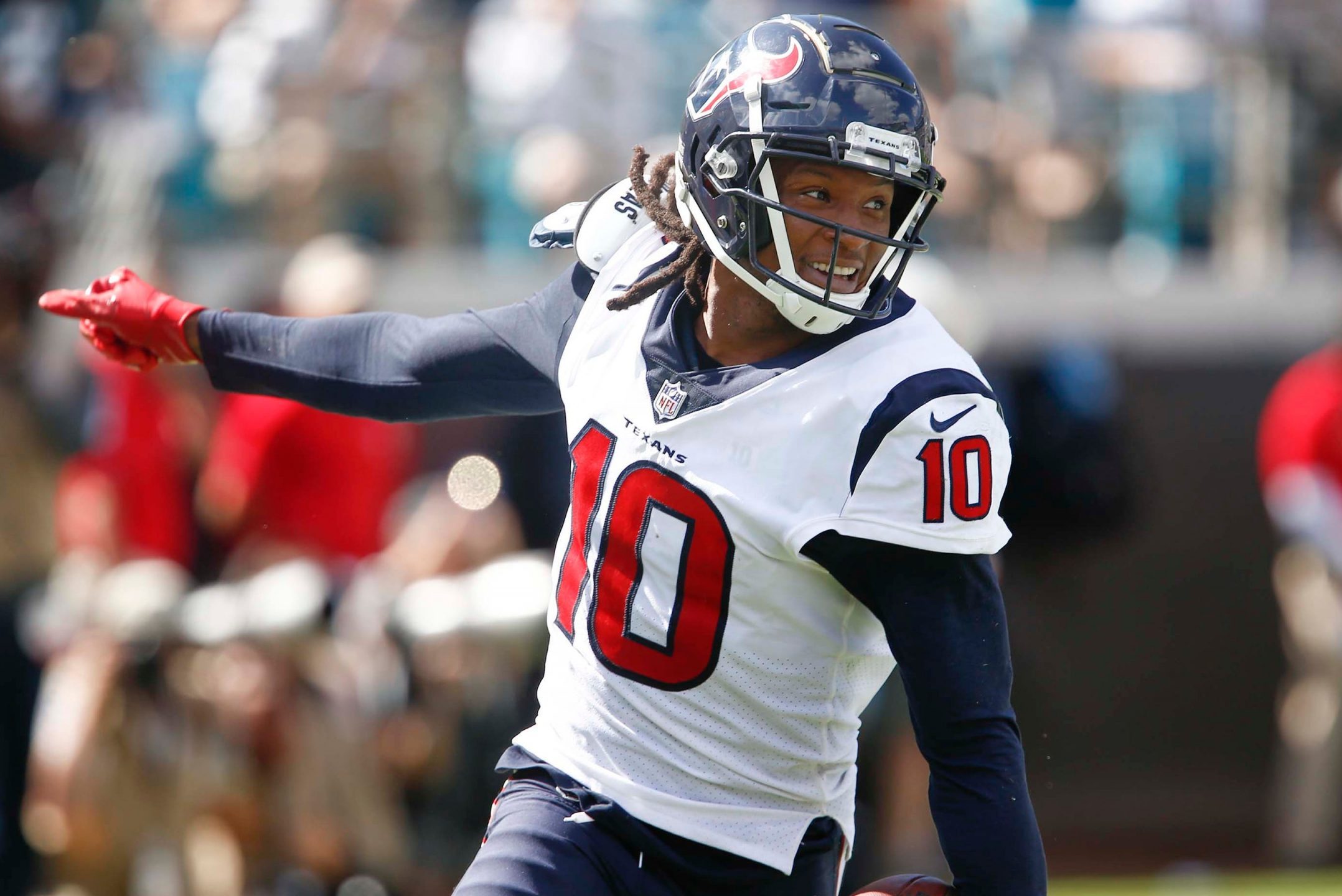 The writers at Dynasty Nerds decided to include you, the readers, in this article! We wanted to show our appreciation for you taking time out of your busy lives to read our content. We reached out on Twitter, searching for your dynasty trades brought on by the hot and heavy action of free agency. Each writer has chosen two trades they will break down. Stay engaged on Twitter, and your deal might make its way into the next Dynasty Nerds article!

In a 10-team league, the only players that matter are studs. That is why, to me, this trade really boils down to Kyler Murray and the 1.10 for Lamar Jackson. I’m not very high on Singletary. I don’t believe that he can be an every-down back and I don’t think he has the receiving ability to be a satellite back; so he doesn’t count for side A as much as other analysts might value him. Even still, I’d rather have him over, Rashaad Penny. And in a 1QB league, I don’t see the value in trading for 2 QB’s in the same move, even if Lamar has a season close to what he produced in 2019. The biggest question mark to me is Josh Allen. He seems to be a way for side A to unload his bench weight.

Without knowing team needs, I’d say side A won this trade by a fair margin (even if this trade was made before the Deandre Hopkins trade)

Again, in 10-team leagues, only studs matter. So to go from (my ranked) QB2 to QB3 and gain the 1.02 seems like a great deal. That 1.02 could turn into another QB (since it is a 2QB league) or your choice of Jonathan Taylor, Ceedee Lamb, Jerry Jeudy, or JK Dobbins.

No doubt, Side B wins this exchange

I love the idea of trading a late first-round rookie pick for Gurley if your team is a contender. I know Gurley didn’t look like himself last season, but the Rams Offensive line didn’t do him any favors, he still managed to finish as RB14 in 2019. He now heads to Atlanta in an offense that should be High-Powered led by Matt Ryan and Julio Jones. The Falcons let go of Devonta Freeman this offseason, which opens up 243 touches at the RB position. I expect Gurley to be the every-down back for Atlanta. He should see heavy volume in that offense, along with many scoring opportunities. As for the other side of the deal, the 1.10 in a Superflex rookie draft can still get you a solid player, especially at the WR position in this year’s draft class, even a running back like Clyde Edwards-Helaire can fall to you at that spot. If your team is in rebuild mode, I can understand unloading Gurley for the 1.10 and getting a nice piece for the future of your dynasty squad.

Assuming the team that acquired Gurley in this deal is a contender I would say side A won this deal, though I think it’s a fair trade that can be beneficial to both teams.

Once again, if you have a contending team, I believe trading for Todd Gurley is a great move. If your team is competing, Gurley can help you win a championship. On the other hand, I think moving on from Kerryon is a smart move. He hasn’t been able to handle the workload over his first two seasons in the NFL, ending up on IR both years. He’s a talented player, but with the injury risk, I can’t see the Lions continuing to give him the bulk of the carries. There is also a pretty good chance they draft an RB this year to compete with Johnson for touches. I’m comfortable adding the 3.02 to Kerryon to acquire Gurley.

Due to the concerns I have with Kerryon Johnson, I would say side B wins this trade.

It’s April, which means rookie fever is in full effect. 2020 rookie draft picks will never be more valuable than they are right now in the days leading up to the NFL Draft. Starting with the 1.08, it’s fair to assume that it’ll turn into a player in the Clyde Edwards-Helaire, Justin Jefferson range. The NFL Draft will shake things up, but this is a relatively safe assumption based on current rookie ADP. Now let’s shift things over to Stefon Diggs. Dynasty owners have been selling Diggs ever since the trade to Buffalo, and this trade is a prime example of a likely sell-low. While the upside of the rookie pick is tempting, this is a situation where the young, proven WR2 gets the edge.

Side B wins the trade.

This is a classic example of a trade that needs to be split up to be fully understood. I’ll begin by comparing the top asset on Side A, the 1.04 rookie pick, to the prime asset on Side B, Todd Gurley. I value Gurley in the late 1st range, so I’d give the edge to Side A here. Next, I’ll compare Mike Williams (Side A) to OJ Howard (Side B). While I think Tom Brady will only help OJ Howard’s stock, I prefer the upside of a young WR in Mike Williams, who’s likely to be paired with a rookie QB in the coming weeks. Again, the advantage to Side A. With rookie picks being the only assets remaining, Side A is left with the 2.03 and 3.03 while Side B has just the 4.06.

Side A has the advantage in every aspect of this deal, making it the clear winner in my opinion.

When this trade was submitted, there were rumors of Melvin and the Buffalo Bills having mutual interest. It turned out there was nothing there.

This is a relatively simple trade. I’ll start with DeMarcus Robinson. Remember back early in the season, Demarcus made a spectacular endzone catch vs. Baltimore Coming off a six catch 172 yard 2 touchdown day. People were thinking ok; maybe there is something here. It turned out there was not much there just the hope of a better landing spot in free agency. So I see the appeal. We will revisit the 2021 first.

The thing I want to touch on here is this owner’s wherewithal to buy low on a now 27-year-old free agent RB without a job. While it is risky, Melvin showed enough in 2019 to be worthy of a 2nd contract despite the slow market. He finished 2019 playing 12 games finishing as RB 23 in ppr.

This trade is essentially a 2021 1st for an aging running back. While I like the idea of adding a throw-in player, like Robinson, if he could have landed in a spot with an opportunity, it would have added more value. Robinson is unlikely to pan out after a fizzled out end to the season. I am going back to the 2021 1st. I love the idea of trading picks one year out. The main reason is you can always reacquire future picks throughout the season while I can see MG3’s seller being happy with a 21 1st. I would prefer MG3. Robinson eventually resigned with Kansas City, and Gordon signed a two year deal with Denver. While I can see an argument for a fair trade, I prefer side B.

With a trade like this, it’s all about breaking it down. Let’s start with the players. At the time of submission, DeAndre Hopkins was still a Texan. Either way, it doesn’t change much for me. The difference in the production of Hopkins and Robert Woods for 2019 is closer than you might think. Hopkins finished as the WR5 with 269.5 ppr pts. Woods finished as the WR 14 with 232.9 ppr points. That’s a difference of 37.6 pts. Add in 2020 2.11 from side B, and I’m calling this part of the trade a wash.

Side B wins pretty easily for me.

The writers would like to give thanks and appreciation to all the people on Twitter for submitting their trades. Special shout outs to @philip_darrow, @HolesEnthusiast, @stratmanjason, @goose53137015, @JDiGi21, @TonyLanger, @ffgreentoe, @superflexy, and @killingspree8 for providing their deals. We have to do what is best for our dynasty team. Keep in mind, dynasty is a long game. It’s all about value. Please, stay tuned on Twitter for future trade break down articles. Thank you!