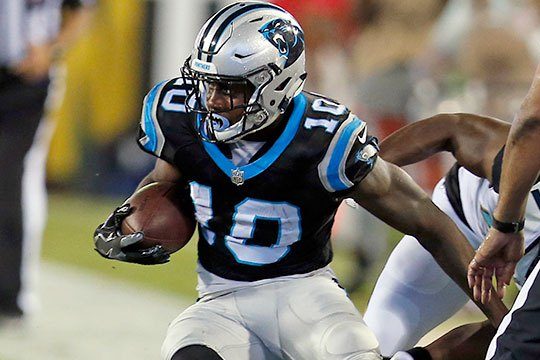 Nerd Notes – A video series that breaks down film on current dynasty players and upcoming prospects you should consider buying, selling or having on your dynasty radar throughout the NFL and College Football seasons. This prospective comes from the lenses of a former college football defensive back. All opinions are based on the traits I see from film; combined with testing metrics, and performance data.

It’s easy to look at the stats alone and dismiss just how much potential Curtis Samuel has. He was a high second-round draft pick in the 2017 NFL. He boasts legit 4.31 speed and elite quickness. Samuel has good hands and is a very underrated route runner. Operating in an offense that has one for the most unique and talented QBs in the NFL along with RB elite Christian McCaffrey. Samuel will have to make the most of his opportunities when given the chance, and he’s shown he doesn’t need much to make a major impact on the field. The Panthers spent a first-round draft pick on DJ Moore in 2018 and most are touting him as the next big thing in Carolina, while discounting Samuel’s capability. Moore had his own struggles as a rookie at points this season, however, these two wideouts along with McCaffrey have a chance to form one of the most explosive trios in the NFL.

Let’s look at the numbers between Moore and Samuel from the 2nd half of last season, weeks 9-17: DJ Moore commanded 58 targets catching 37 balls for, 594 yards and 1 TD. During that same time span Samuel had 57 targets, catching 33 balls, for 488 yard and 5 TDs. Samuel outscored Moore by 20 fantasy points and according to dynastynerds.com rankings, Moore is being viewed as a top-24 WR, while Samuel is falling outside of the top-50.

The departure of Devin Funchess opens up 79 targets and the only WR of consequence that the Panthers added so far this offseason was Chris Hogan, who should pose no immediate threat to Samuel’s work. The team would also be wise to scale back McCaffrey’s workload from his 94.5% snap share which was #1 in the NFL. Cam Newton’s health is the x-factor for the all of the WRs in this offense. He was shut down towards the end of last season because of a shoulder injury. Samuel will have to overcome his injury history as well as he’s missed time in both his rookie and sophomore campaigns with various injuries. If he can put it together for at least 14 games, I believe dynasty owners will have a high-end WR3 with upside to produce as a low WR2. Samuel will only be 23-years old when the 2019 season kicks off, with so much room to grow. This might be one of the last times you can buy him at a discount. I’m making offers for him in every league that I’m in…you should do the same!

I’d love to see actual examples of Superflex quarterback trades you’ve gotten done or witnessed recently, if you’d like to reply to this tweet.