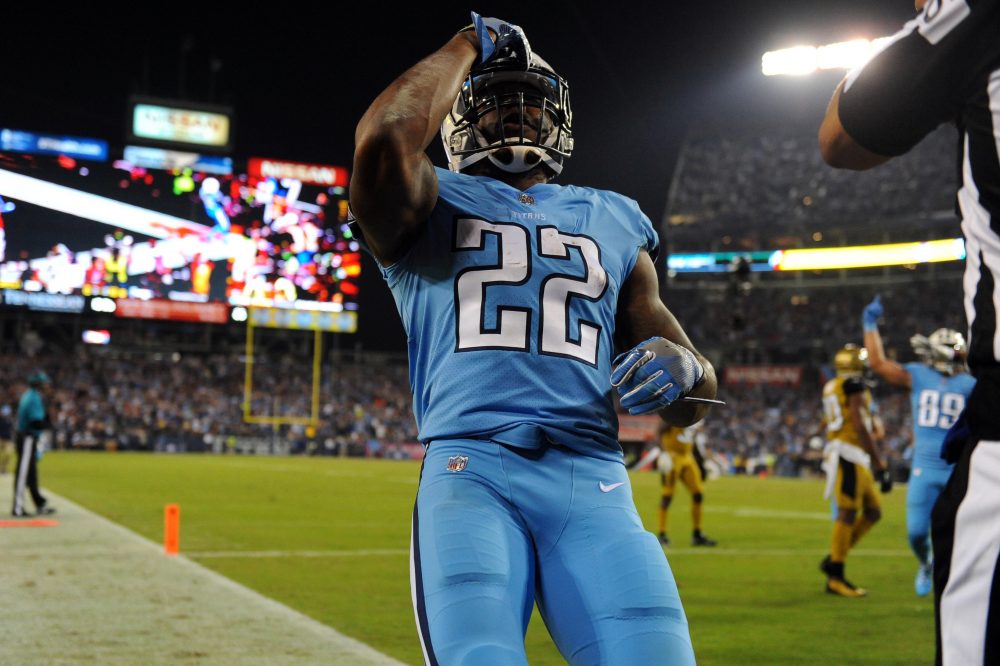 Derrick Henry is one of the more polarizing players heading into the 2019. I think people forget just how explosive of an athlete Henry is. Coming out of Alabama Henry ran a 4.54 40-yard dash and according to playerprofiler.com his speed score was 97th percentile burst score was 89th percentile. At 250lbs his short area agility was predictably unimpressive but his overall talent profile screams athletic freak.

Parked behind a very effective and efficient Demarco Murray his rookie season, he showed flashes of future NFL stardom. In his second season Murray looked all but washed, and Henry looked every bit the monster that made him the Heisman trophy winner his junior season at Alabama. However, the consistent carries did not follow the flashes, as Tennessee continued to roll out the corpse of Demarco Murray week after week relegating Henry to a complementary role.

The stars seemed to be aligning for him when Murray announced his retirement following the 2017 season. Last year was supposed to be the 3rd year breakout dynasty owners had all patiently been waiting for. The Titans signed the shifty Dion Lewis to what many believed would be a commentary role to Henry, but the carries to start the season didn’t materialize.

Over the first 12 weeks of the season Henry only carried the ball 12 times or more twice. While his counter-part received 12 or more carries 6 times in that same time span. Lewis received 40% or more of the teams rushing market share 6 out of those 12 weeks and Henry only hit that number twice.

The shift came from week 13-17 when Lewis cracked just a 30% rushing market share just once while Henry didn’t drop below 45%. That shift paid dividends for Henry, the Titans and dynasty owners of Henry.

The Titans offensive line had issues with injuries and ineffectiveness all season long, and according to footballoutsiders.com they were ranked the 17th best run blocking offensive line in 2018. Looking at henry you might think that he is just a plodding big man that needs to be slammed up the gut repeated, and apparently that’s how the Titans OC viewed him last season.

However, Derrick Henry vs. the league average heat map data (provided by: www.ffstatistics.com) shows that Henry can be an effective runner at all quadrants of the field if given opportunity.

I believe that if it is going to happen for Derrick Henry, this is the season for him to show that he is capable of carrying an offense. While I do not subscribe to many running backs taking on the antiquated role of “bell-cow” Henry definitely has the shoulders to carry the ball 250 plus times in 2019. Still only 24-years old, he has not missed a game in his NFL career. He has shown an outstanding ability to stay healthy and does not wear down as the games go on. While he won’t be confused as a dynamic receiver out of the backfield, getting him the ball in space on screens and dump-offs, have proven to be a very effective strategy the Titans may deploy more often in 2019. Can I see Henry catching 50 balls in a season, no! But then again, I didn’t envision Ezekiel Elliot hauling in 77 receptions in a season either. I do think Henry could command 25-30 receptions. You combine that with 250 + carries with his explosion and goal line capability, I believe that you have a low-end RB1 and at worst a mid-ranged RB2 (in PPR formats) on your hands in 2019. According to DLF start-up ADP data, he is being drafted around player 44 right around the Derrius Guice, Aaron Jones, Marlon Mack range. Personally, I believe his outlook and opportunity to dominate touches in that backfield is clearer than those other players and therefore shouldn’t be someone you are actively willing to sell. Henry has to show more consistency in 2019, but everything we’ve seen from him up to this point in his career suggests that if you give him the touches the production will follow. He is a dynasty hold for me right now.