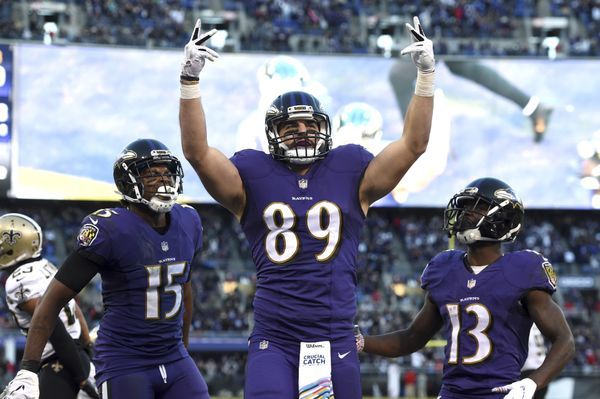 I don’t plant my flag often, but when I do I make sure it’s on a mountain of a hill, and Mark Andrews is that Hill for me. The 2nd year TE from the Baltimore Ravens is primed to make a 2nd year leap in 2019 and become a TE1 for your dynasty teams. Check out this Nerd Notes video breakdown of next big thing in the NFL.

Mark Andrews was 3rd in rookie TE receptions and 1st in receiving yards. He only started 3 games and saw 50 targets. Over the last seven years, only Evan Engram has had more receiving yards in his rookie season than Andrews. He was 10th in the NFL in yards per reception and he not only flashed big play capability, he demonstrated high level football IQ, toughness, a willingness to go over the middle, superb route running and fantastic hands.

According to data found on airyards.com, Mark Andrews was second on the Ravens in TE snaps behind blocking TE Nick Boyle. He played a total of 338 snaps which 35% of the team’s TE snap share. First-round pick Hayden Hurst was on the field for 207 snaps. Andrewes ranked 14th in the NFL for receiving yards for TEs. Of the TEs who caught a minimum of 30 balls, Andrews’ average depth of target was 3rd in the NFL at 11.1 yards. He was 15th overall in air yards.

The stats, the film, what does all this mean? It means Mark Andrews is damn good. For a rookie TE to step into the league and perform at this level is uncommon. First-round pick Hurst was inactive for the first month of the regular season after suffering a stress fracture in his foot during the preseason, opening the door for Andrews to showcase his skills. Hurst will be 26 years old at the start of the 2019 season; Andrews will only be 22. He isn’t going anywhere. He not only filled in, he exceeded all expectations. This shouldn’t have come as a surprise as he was an All-American at Oklahoma and Mackey Award winner as the nation’s top TE in 2017.

According to dynastynerds.com PPR rankings, Andrews is 14th overall at the position behind Mike Gesicki and Trey Burton; I’d personally take him ahead of both of those guys. Is there regression coming from a yards per catch standpoint, sure. However, he should see an uptick in targets and receptions and I think a 500-yard receiving season is his floor. The additions of Marquise Brown and Miles Boykin give the Ravens blistering speed on the outside, freeing up the underneath and seam routes for Andrews. You can see plays during the Nerd Notes clips where the threat of Lamar Jackson running holds linebackers and safeties long enough for Andrews to slide behind the defense. All of this makes for a potential juicy situation for his short and long-term dynasty value.

I don’t see many weaknesses in his game, although he did have 3 credited drops on the season. My biggest concerns for him are: (1) Lamar Jackson and (2) Hayden Hurst. I am giving Jackson the benefit of the doubt, as a rookie nobody expected him to come into the NFL and light it up with his arm. However, he has to improve his accuracy and decision making. I saw at least 5 plays where if Jackson put the ball in the vicinity of Andrews and he came down with just two of those balls, he would have been close to a 700-yard season. My second concern which can be cleared up as early as OTAs, are the Ravens plans for Hurst. As a first-round pick, I don’t foresee them benching him outright. He will still have opportunities to make plays in this offense, therefore limiting Andrews maximum upside for now. He signed a 4-year rookie deal which almost guarantees he’ll remain with the team at least two more seasons. Luckily Andrews showed more than enough promise to where he shouldn’t take a backseat to anyone in that TE room. I firmly believe that Mark Andrews will find himself as a top-12 TE by the end of the 2019 season. Not only is he talented, he’s proven; even if the sample size is small. He will continue to have opportunities to make plays down the field given the style of offense the Ravens want to run. I was able to acquire him in a league for Gus Edwards and a 2020 4th round pick. I’ve seen dynasty owners on twitter saying they grabbed him off the waiver wire. I’m telling you now, your window for buying him at a relatively cheap price will be slammed shut before the end of 2019, go get him NOW!