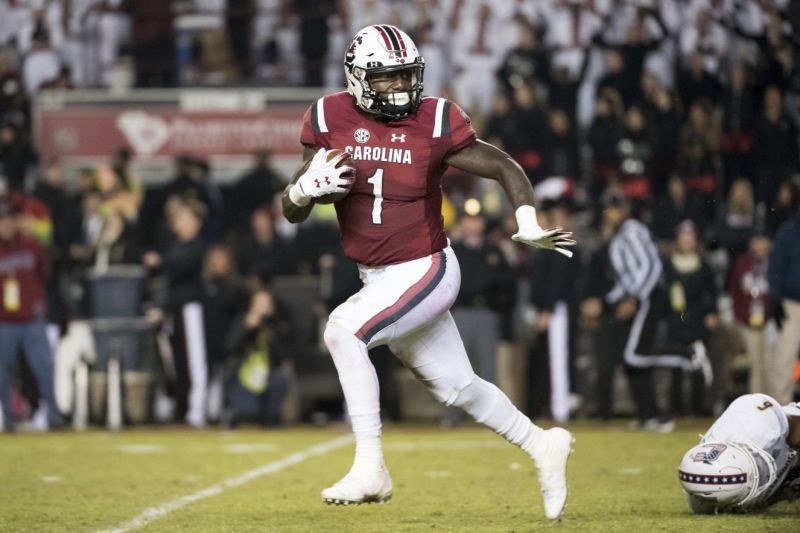 Every draft there are those skill players that surprise us by being selected higher than we had anticipated.

We read thousands of tweets and articles predicting draft position in the lead up to the draft. In the space of 3 days we can be made to look like we’re not playing with a full deck. This year was no exception. A few of these moves had me feeling like a fish out of water. As such, due to the higher than expected draft capital, they receive a perceived boost by the community.

Additionally, some of these players we perhaps anticipated to be drafted high, but their landing spot increases their standing in our rankings. This article will highlight both sets of players.

Being at 6th overall, we know the Giants are heavily invested in Jones. I like Murray and Haskins a lot more, even Lock. But considering the draft capital the Giants invested you know he’s going to be a starter for a few years at least. That should be enough to see him rise in Superflex drafts. Plus, his weapons aren’t terrible….Tate, Shepard, Barkley, and Engram. With an improved line, I could think of worse starts.

Deebo goes in the early 2nd round to a Kyle Shanahan offense. Can’t ask for much better than that. Given some of the other WR landing spots, this surely pushes him up rankings. Given Shanahan’s proficiency developing WRs, you have to love this spot. Pettis and Samuel should be the top WRs in this offense alongside McKinnon and Kittle. This move knocks Goodwin’s value.

Another notable mention has to be Jalen Hurd. Noone had him going as high as he did, but he should be an interesting gadget player in this offense. I expect Samuel to now be drafted top 6 in a lot of rookie drafts, while Hurd rises to the 2nd round.

As the Eagles 2nd round pick, JJAW will be flying up draft boards. A healthy Wentz under center in 2019 will be great for any Philly WR. Arcega Whiteside should develop as a top target for Wentz for years to come and I see no reason why he can’t surpass Alshon and Agholor in time. I love this landing spot and can argue for him to go as high as 1.06 in rookie drafts. The Eagles offense is shaping up nicely with Sanders, too.

As tweeted earlier, I think JJAW is going to be “my guy” in this class. There are so many things that he does better than people realize. Starting with the most obvious, JJAW is an great red zone target 🎯 pic.twitter.com/J7RRhIIU07

I’ve loved Isabella for a while and clearly the Cardinals do too. They traded up to snag him and I’ve been saying for months that he’s more than a stereotypical white, slot WR. He has elite speed and toughness to play outside and this can be a prolific offense in the next couple of years. Add Butler in to the mix and this offense will be firing. Down the road, Isabella can become a target monster for Kyler.

The Jaguars selected Josh Oliver in the 3rd round and I think it’s fantastic for his value. The Jaguars’ WR corps isn’t super strong, and they’ve lacked a reliable TE target for years. Oliver is a monster when it comes to getting first-downs and touchdowns and I think Foles will love him in the redzone. This selection solidifies him in the 2nd tier of TEs for me.

Very similar to Oliver, Sternberger enters a solid situation. Regardless of previous history of TEs with Aaron Rodgers, I don’t think you can say this is a bad spot for any receiving prospect. Jimmy Graham isn’t the same player anymore and within a year or two, Stern can steal his spot. Like Oliver, he’s now in the 2nd tier for TEs in my rankings.

I honestly don’t know a ton about Johnson, but the Steelers took him early in the 3rd round. Given their fantastic history of developing WRs, you have to be intrigued. I think this selection is great for James Washington, but I’ll certainly have to revisit the Diontae Johnson tape. Ironically, the pick was acquired in the Antonio Brown trade.

McLaurin arrives in Washington to play with his college QB, Dwayne Haskins. It’s a great destination for Scary Terry as there aren’t a ton of established wideouts on the Redskins roster. I see McLaurin being a favorite target on the outside while Trey Quinn absorbs slot targets. Redskins will likely run a ton given their plethora of RBs they have on the roster. However, eventually McLaurin will develop into the teams WR1 or 2…. Depending on if they draft another WR next year.

Armstead had a fantastic combine performance and now lands in Jacksonville. Given that Yeldon has now departed and Fournette’s concerning injury history, there’s a real chance that Armstead starts a game or 2 this year. JAX invested in the O-line in the draft so I wouldn’t be surprised to see Armstead taken at the end of the 2nd round in rookie drafts.

Watched the only 5 games I could find, but came away liking him more than I thought I would. He had a very good combine in it’s not hard to see why. Armstead is an explosive runner with great size( 5’11 220lbs) and a relentless motor. pic.twitter.com/01vaQQGiAj

Another Superflex pick, but the Patriots may have selected Brady’s heir in the 4th round. Some analysts that I really respect have been praising Stidham all off-season so I’m curious to see how he plays in preseason after some Belichik/TB12 coaching. Worth a shot in those Superflex leagues for sure.